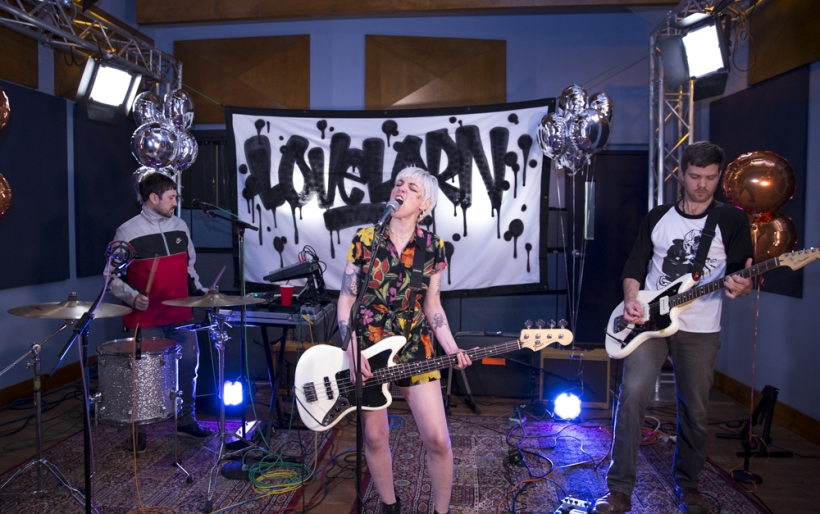 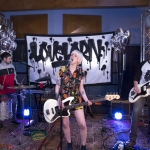 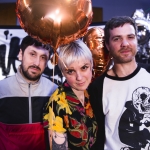 There’s always been an element of chaos to the three lifelong friends in Philly’s Lovelorn. It followed them all across their long running heavy psych punk outfit Creepoid, from brawls to arrests; for a survey of the more legendary incidents involving that band, check out this retrospective by Megan Matuzak, written prior to their farewell show in February.

With that kind of lineage, it couldn’t be more appropriate that a fire alarm went off during Lovelorn’s first-ever radio performance at WXPN. It started simple enough; the band wanted to approach their Key Studio Session with a different visual aesthetic than we usually present. They wanted to deck the room out like a stage show; they wanted to have an audience on hand, having a dance party to their new jams. The songs they’re making as Lovelorn have an urgent pulse to them, something in the vein of Factory Records and The Fall, Suicide and Pornography-era The Cure. In short, they called for more interactivity than the heady, immersive drone of their previous outfit, and I was happy to provide them the opportunity.

Their fog machine, however, had different plans. Its output filled the room with a thick haze that seeped outside the studio and up into our drop ceiling, triggering smoke sensors. A piercing alarm was set off; a shrill siren that would not relent until an hour later when the entire building was evacuated and police, fire and building management crews showed up on the scene. That siren haunted my dreams that night; the band totally needs to sample it on one of their future jams.

By the time we were able to get back in the studio, it was 9 p.m. and the band, crew, and crowd alike were ready to kick out the jams, as you can see in this fired-up performance of “Around You.” It’s a song about love and detachment, about the way things change with time and distance, about the struggle of maintaining meaningful connections throughout our lives. It’s deep and dark, but it’s catchy, and you can dance to it.

The band gave a thorough overview of what they have in store in that performance; PeteJoe Urban unleashed atmospheric guitar leads and raging riffs, Pat Troxell kicked out raging rhythms using an icy drum machine and a minimal kit, and Anna Troxell stood in the center of the fray, harmonizing with Pat on some songs and singing lead on the rest, trashing away with abandon.

“Sickness Reward” is another high-energy dance cut, skittering down ominous sonic corridors, a space similar to the one we hear explored on the slow-burner “Fallacy Is A Lover,” which is totally Bauhaus-ian. And for all that these bandmates eschewed the Mazzy Star comparisons they got in the earliest days of Creepoid, those vibes are ever-present on this performance of Lovelorn’s debut single “Chains,” which drifts and sways in melodic tones as Anna sings “Take me away to my next big phase,” a forward-looking statement if ever there was one.

Listen to Lovelorn’s entire performance for The Key Studio Sessions below; the band is heading to New York today for a headlining gig at St. Vitus in Greenpoint, Brooklyn with Russian Baths, Kindling, and Control Top. They return to Philly Saturday for their first hometown headliner at Johnny Brenda’s with Night Sins and Dreamswell. Tickets and more information on that show can be found at the XPN Concert Calendar.