I think my friend Patrick Rapa put it best in the pages of City Paper back in summer of 2003. With the wind of Yankee Hotel Foxtrot still in their sails, Wilco was playing the newly-opened Festival Pier at Penn’s Landing on June 28th of that year, it was a co-headlining show with NYC noisemakers Sonic Youth — one of those rare “this doesn’t totally make sense but I love it” concert bills — and in the late great alt-weekly’s summer arts preview issue, Pat wrote something to the effect of “if the Festival Pier broke loose and sank into the Delaware River during this show, what ever would become of Philadelphia’s entire music critic community?”

He had a point. This was one of those gigs where you could spot music journos from CP, the Weekly, the Inquirer, Magnet — pretty much everybody who wrote about mainstream and indie rock in the 215. It was a gig we were talking about long after the fact; I remember chatting with my fellow CP-er Michael Pelusi at a 4th of July party about Sonic Youth’s set, how good the songs from Murray Street sounded live, how drummer Steve Shelly was truly the unifying force of that band, as he was able to reel back their propulsive free jams into forward-moving structure with small signals like an extra tap on a ride cymbal.

Wilco played second, and knocked it out of the park(ing lot), as they are wont to do. This was back when the stage of Festival Pier faced inward towards the city, rather than its current position facing away towards the river, and it radiated sound and light beyond the fence line and up Spring Garden Street. They were backed by projections of birds not unlike the cover art we’d see a few years later on Sky Blue Sky; there were images of thunder and lightning, dense blacks and burning whites, setting the tone perfectly for the moody set of songs.

We got an early and extraordinary performance of “At Least That’s What You Said” from A Ghost Is Born; we got “Laminated Cat” from frontman Jeff Tweedy’s Loose Fur project (which, okay nerds, was technically a Wilco demo first). We got “Kicking Television,” which went on to become the b-side to “I’m A Wheel.”

My friend Michelle joined me for the show, and really wanted to hear Wilco play “Heavy Metal Drummer” — “because they could totally change the lyrics to ‘I sincerely miss those heavy metal bands that we used to go see at Penn’s Landing in the summer’!” — but alas, it was not in the cards. Yankee Hotel was represented throughout the set, though, “Poor Places” sounding particularly massive, and as it lapsed into a wash of devastating noise and the warped English voice robotically repeating the name of the album, the pairing with Sonic Youth made sense.

The other moment where I totally got the double-bill? When they played the now-classic “Misunderstood” as the penultimate song in the set, the one where Tweedy shrieks “I’d like to thank you all for NOTHING! NOTHING! NOTHING! [et cetera et cetera ad infinitum] NOTHING AT ALL!” At this show, the six-and-a-half minute performance of the song included 48 “NOTHING”s over 58 seconds, which I’m not sure if that’s a record or standard, but there was a dude standing in front of me at the barricade, over the moon and pumping both fists in the air to every single one.

Confession time: my memory is not so comprehensive that I remembered all 48 of those “NOTHING”s; i had to consult an immaculate soundboard recording of the concert, which you can stream or download at Panic Stream. Unfortunately, no such recording appears to exist for the Sonic Youth set, though the Sonic Youth official archive includes a cosmic gig poster (see below) as well as the setlist; I remember loving the hell out of “Radical Adults Lick Godhead Style” and “Mariah Carey & The Arthur Doyle Hand Cream,” feeling like “Peace Attack” was kind of a soft and corny response to the Iraq War the country had just recently instigated, and I remember the main set closing of “Catholic Block” into “Sympathy for the Strawberry” firing me up for the rest of the night.

Were you there, too? Leave your memories of this concert in the comments.

UPDATE: Regarding the Sonic Youth – Wilco connection, as commenter Bill put it on Facebook:

Really surprised at the lack of scholarly knowledge displayed by the writer here. No one knew the connection between Sonic Youth and Wilco? Really? Jim O’Rourke was playing guitar as an official member of SY. O’Rourke was also a member of Loose Fur, the Tweedy side project that recorded Laminated Cat (referenced in the article). O’Rourke also layered the special sauce in Yankee Hotel Foxtrot as the final mixer that shaped YHF into a classic. Tweedy loved O’Rourke so much he had him participate more heavily in the A Ghost is Born sessions that were taking place that Summer. No connection between SY and Wilco? Pfffft

O’Rourke even joins Wilco for Not For The Season and is listed in the tracks listing. Crazy. Sound is amazing

You are correct all around, Bill! As someone with a Sonic Youth tattoo, I should have remembered that O’Rourke was playing with Sonic Youth during this time period. I’ll be tendering my resignation immediately. 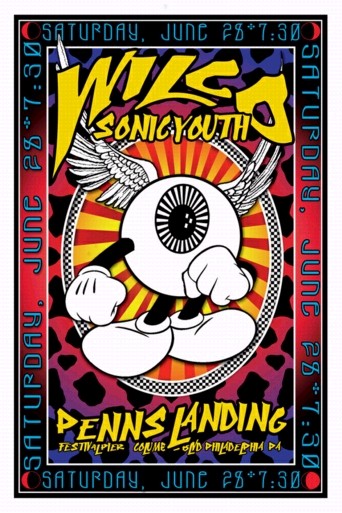