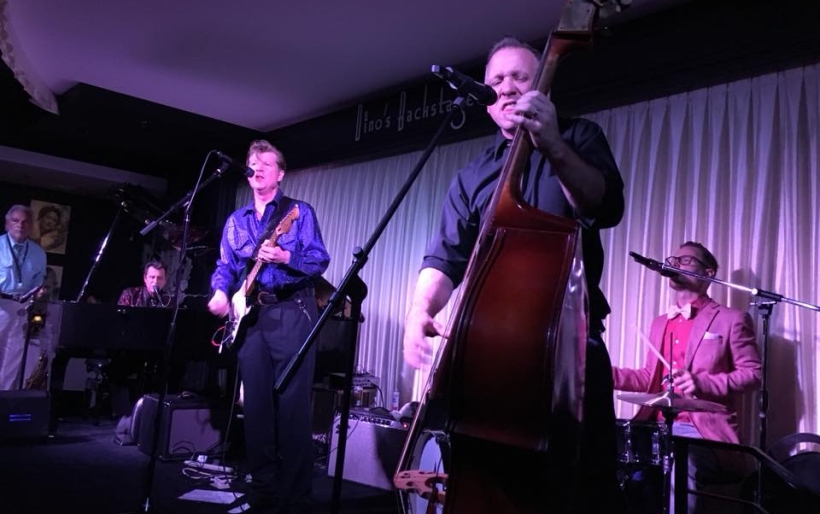 It’s a warm and rainy Saturday night in June, and the Deco-stylized confines of Dino’s Backstage and The Celebrity Room in Glenside – from the outside – looks as elegantly comported as it always does when distingues cabaret acts such as Marilyn Maye, Billy Stritch or its co-owner/singer Michael Kelly-Cataldi work the room. On this night, however, the pricey tchotchkes are rattling, and the dreamy B&W Hollywood headshots of yore stare down in disapproval.

That must mean Dibbs Preston and the Detonators are at Dino’s, doing their now once-a-month soiree and disturbing the peace with an all-around swing dance party, and its accompanying rockabilly soundtrack. Here’s where Preston – nattily dressed in a pastel, wide lapel suit, NuNile firm in his short, blonde floppy pompadour – holds court over a group of equally tonsorial and sartorially correct dancers, while drummer Marco Del Destino, stand-up bassist Johnny Lingo and piano player Ralph Miller lay into a slap-and-tickle groove.

“Dino’s is a high end supper club in the best tradition; a very glamorous place where the ladies love to dress up and dance the night away with suitably stylish guys,” said Preston during a quick set break between bites of Eddie Cochran songs and Dibbs’ own cutting, period-appropriate originals. “It’s all about the swing.”

Before night’s end, not only will Dibbs and the Detonators thrill the assembled dancing crowd with more dangerous rockabilly curves than “Brighton Rock;” Dino’s resident crooner Kelly-Cataldi will join the Brit hillbilly-ish ensemble for Patsy Cline covers for lovers and slow dancers alike.

That Dibbs repeats this raw, retro-phonic Dino’s evening on July 13, as well as the North Penn VFW Post 676 on Jenkintown Road on many a Sunday (next one is tonight, July 1), along with nights throughout Glenside, then Lansdale, and going up to Pottstown and Lancaster areas, means that this British transplant who first played Philly at Chestnut Street’s London Victory Club  in 1981 is the local brand ambassador to all things rockabilly. And he will continue to conquer Pennsylvania, one sleepy burg at a time. “This is a truly great scene around these parts, of swing dance/rockabilly fans, and of varied ages,” said Preston. “I’ve seen early 20-somethings dancing alongside couples in their 60s and beyond. It’s the music, it keeps you young.”

The young Preston, at the time of punk’s twilight first gleaming, was a 16/17 year Clash-Pistols-Damned fan by virtue of their presence alone. In reality, in the 1976-77 years, he was learning to play guitar (and eventually banjo)  so to play with his pals in the then-starting Levi & the Rockats. “When we got together in London is when we met the American manager-photographer Leee Black Childers, who at the time, was living there and managing American punk bands such as  Johnny Thunders and the Heartbreakers,” noted Preston.

For the uninitiated, Childers had an varied music, art and social history which went back to Andy Warhol’s Factory scene in the late 60s, then the dawning of glam in the UK (as association with Bowie and Mick Ronson) and the US in the early 70s, before moving onto London’s then-bourgeoning punk scene. “We met Lee at the Global Village, and then the Marquee in 1976, with my brother Peter and my friend Vaughan Dibble around,” stated Preston. “Leee noticed we had a different look than the punks, and wondered why we were not getting attacked by and beaten up. I told him that we were into 50’s rock n’ roll and rockabilly but dug the Dolls and the Stooges.” Next thing you know, Childers whisked Preston to a Johnny Thunders show (“I got to hang out and Johnny showed me some guitar riffs”), and at one point, Dolls-Heartbreaker Jerry Nolan even became part of the Rockats. Not too long after this first hang out, Childers met young rockabilly Londoners Levi Dexter and Smutty Smith, both who join in with Prestonn & Co, and started the band Levi and the Rockats with Leee as its manager.

“I think the punk attitude of not having to be a virtuoso to perform live gave me and the rest of the Rockats confidence to get on stage and start playing because we were far from learned players at that time,” said Preston “That’s the reason we only played in punk venues. At that time, the purist rockabilly Ted audience would not have liked our style.”

As far as playing the banjo went, Preston claimed that his style was one closer to an Earl Scruggs-type picking technique, “in as much as you would finger pick the six string,” he said. “I even wrote a song called “Rockabilly Banjo,” which is still in the can, but has to be finished. I like to try and imitate the banjo sound on a guitar, and if I keep working at it, maybe I’ll get as good at it as Albert Lee.”

When Preston and the Rockats got to Manhattan in 1978, and Los Angeles in 1979, no one was playing raw, roots rockabilly save for Robert Gordon (with whom Preston would later record songs) and Buzz and the Flyers on the East Coast, and Ray Campi and the Rockabilly Rebels and X’s Billy Zoom on the West Coast. The Cramps? “They invented the Psychobilly sound,” noted Preston.

The Stray Cats? “They weren’t around yet,” said Preston. “Smutty (Smith), our bass player had that stand-up bass and full sleeve tattoos, which was very unusual at that time.”

Preston does note that he first met Brian Setzer and his brother Gary (both part of Philly’s Bloodless Pharaohs at the time), at Max’s Kansas City after the debut Levi and the Rockats gig. “They were a year or two younger than us, so we had an influence on their style,” stated Preston. “The Pharaohs started a rockabilly trio named the Tomcats, met an English manager in Philly who took them to London and onto great and well deserved success.” Preston does see Setzer and Stray Cat Slim Jim Phantom on occasion, and yes, guitars do come out for a mutual jam. “We’re all mates.”

As avatars of a new, old sound, playing the first Rockats US tour – from Boston to Nashville – was as big a deal for the audiences, as it was the band. “Wherever we played, we won over the club so much that they stopped having Saturday Night Fever Disco nights, and switched to new wave night instead. Remember, there was no rockabilly audience yet in the US; just the new wavers / punks that were open to something different. We were definitely opening up the  US to the new rockabilly style.”

It is here that the seeds of Preston’s attack on (and eventual move to), the US commenced, especially when the band settled in Manhattan as it business base. “We played the Blue Comet in Glenside – this rockabilly haven – in the late  90s. That’s when I met the club’s owner Tommy Maguire who arranged for us to play there more often. I was living in Manhattan with my wife, Lisa, and we thought we might try Glenside for a year.” The marrieds loved the area, met some great like-minded people, and have now been in the area for 12 years.

From that 1998 gig with the Rockats to Preston’s many showcases with Dibbs and the Detonators at the Blue Comet, a strong rockabilly scene in Glenside began to bubble and boil over. The word was out: if you were a rockabilly aficionado – or just a guy with tats and a duck’s ass greaser doo with a yen for a good rocking time – the Comet was your place.  “We were so lucky to have the Blue Comet for all those years,” noted Preston. “Some great bands played there and we had some crazy nights. Scott Acker really played a big part in energizing the live rockabilly music scene in Glenside for years, but, alas there’s no more music at the Comet.” Eventually Maguire turned the still-going Blue Comet into a respectable bar and restaurant, leaving Glenside’s rockabilly’s cats and kittens searching out the slap-bass, skiffle rhythms they’d had on a regular basis.

Comparing the build out of a new and current Glenside scene to that of the original punk scene, Preston stated that “the connection between punk rock music and original rockabilly was always strong. You could say that rockabilly music in 1954 was the original roots of punk rock. Take a listen to ‘Tear it Up ‘by the Johnny Burnett Trio, or ‘Rumble’ by Link Ray, or even when the Cramps made Psychobilly. Now in the Philly area a lot of kids are discovering this music as Americana and dancing again. They want it.”

With that, Preston has become Glenside and the surrounding bergs’ rockabilly beacon – an ambassador for the rockin’ scene around this area – with his Detonators by his side. With that, the guitarist and singer sees the appeal of this rough and ready sound in league with the neighboring work ethic.

“Traditionally, rockabilly music has appealed to working class blue collar types in America, as well as in Europe,” says Preston. “But, just like soccer, it moved with the times and has now included a bigger demographic that goes right across classes. Because it is great live music and, if you want it, an entire lifestyle with the hotrods, tattoos and pinup girls.”