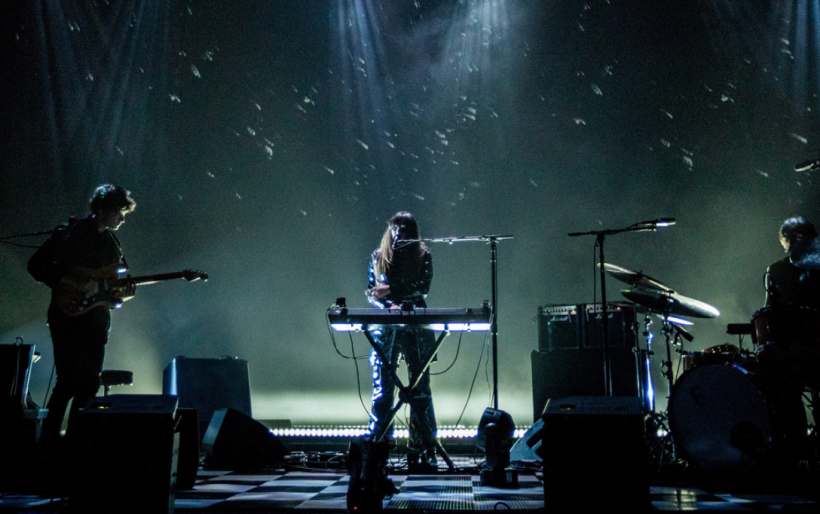 Starting in a place of darkness has always given Beach House its balance, its symmetry, its heft. Despite the incongruity of a sandy-and-sunny name (unless that house is in grey and rocky Brighton), theirs is a poignant place of musical melancholia mired in thick electronica, noisy bent-string guitars, dense tom-tom rhythms, and a lead vocalist whose affinity for Nico-esque singing and neo-Beat poetry could snatch the air out of any room from its gravity.

No one gets out of here alive when Beach House is around.

And yet, there is/was something joyful, elevated, elegant and celebratory about a clad-in-black and singularly (simply, starkly, dramatically) backlit trio singing “Star death ringing / Brought fear” (“Dark Spring”), and “You want to go / Inside the cold / It’s like a tomb” (“Black Car”) through a pulsing, electro-din reminiscent of Black Celebration-era Depeche Mode and a slower Deutsch Amerikanische Freundschaft.

Oh, and this happened at the Tower Theater in Upper Darby on Thursday night.

You couldn’t see the faces of Beach House singer-harmonium-ist Victoria Legrand, guitarist-keyboardist Alex Scally, and a thunder god drummer whose name goes unsung as they ripped through the blurrily hypnotic “ppp” or the rubbery roil of “Myth” with its accusatory tone (“What comes after this / Momentary bliss / Consequence of what you do to me”) coming through the impossible-to-hear lyrics. “But I can see you,” said Legrand during her occasional between-song patter to the audience, fully aware that a Beach House available in silhouette was both loathsome to its audience, and exactly what its audience needed.

Focus was required as each rippling, slippery-robotic dreamscape of Beach House’s blipped and bounced along.

As obscured as their words and their faces were, and how divinely murky they could be – lyrically and sonically – there was something abrupt and precise about Legrand’s caterwauling broadening of the vocal palette from which paints. Yes, it was a Nico-like drone that wormed its way through the detuned tinny pop of “Lemon Glow” and the sparkling shimmering neo-C&W (!) of “Master of None.” But moments such as “Drunk in LA” and “Wild” found Legrand stretching higher and soaring farther and fuller as a vocalist than ever before.

Make no mistake: tousle haired guitarist-keyboardist Scally was Beach House’s secret weapon, Along with considering that he co-wrote Thursday’s Bacharach-meets-Gore-like melodies with Legrand, Scally offered up a bedrock of scratchy drones, e-bow bent notes and an overall static that even shoegaze-y My Bloody Valentine will find hard to beat next week.

Superb and sublime stuff, this