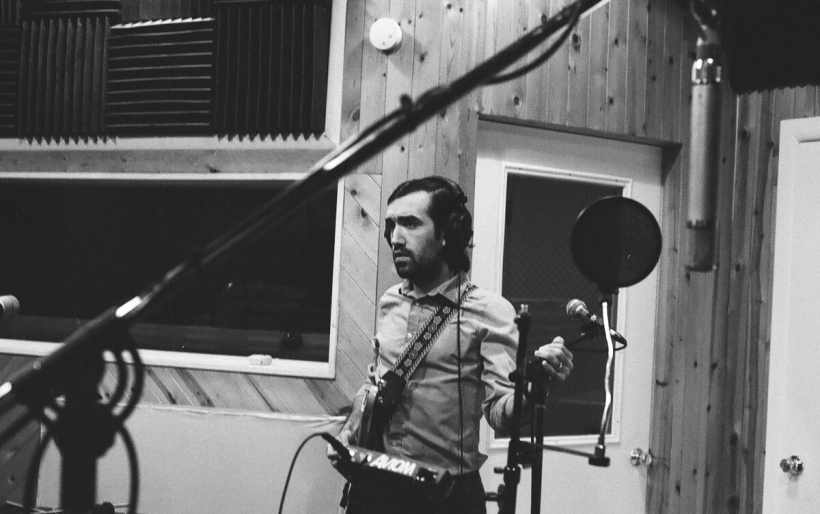 American Trappist | photo by Kara Donnelly | courtesy of the artist

By John Vettese
August 22, 2018
11:08 AM
Share
American Trappist | photo by Kara Donnelly | courtesy of the artist

It’s no accident that the cover of the new American Trappist album features a young Joe Michelini smiling at the camera, a bed of mums in the background and a grim reaper sitting on a wooden chair, bone-hands on lap, a macabre grimace pointed menacingly in the boy’s direction.

Though the photograph obviously a cheery artifact of some Halloween past, it also serves as a memento mori — the millennia-old artistic and philosophical practice of reflecting on our own mortality and transience. Life plus time equals death, and for all of humanity’s varied spiritual practices and pontificating, none of us really knows what death means. And it’s terrifying.

“It’s the biggest feeling I’ve ever felt,” says Michelini as we talked about the new American Trappist album Tentanda Via at WXPN studios last week.It’s out on Friday, but you can take an exclusive first listen to below, and as our conversation unfolded, it became clear that beneath the record’s uplifting, anthemic, eclectic rock and roll, Michelini intended it as a sort of musical memento mori.

“I think there are times in my life, sorting through this, where I feel like I’m still dodging suicide at points,” he says. “I’ve started to get help after working on this record, which is great. But it can be difficult to find the right kind of help for that kind of stuff. The title of the record, though, which means ‘the way must be tried’…the idea for me was that maybe, before I wrote off existence, I would make this effort to try to live a meaningful life, to life my best life. That’s the conclusion of the record, though it hasn’t been that easy.”

Michelini got his musical start a decade or so ago in River City Extension, the North Jersey-based rock collective that he led from approximately 2009 to 2014. The band and its nine members were a sonic and visual force to be reckoned with, fusing ambitious orchestrations and punk energy, and they gained a lot of attention in the post-Arcade Fire, post-Broken Social Scene aughties; outlets like NPR and AltPress and blogs like Consequence of Sound effusively sang their praises, though the band’s sprawling size and relative inexperience left it not the most profitable venture for anybody involved. “We had no plan,” Michelini admitted, and when River City disbanded, he rethought his whole way of doing things. He moved to Philadelphia with his now-wife, Hannah, and quietly launced his new solo project, American Trappist — named such in part for his love of beer and his admiration of the vow of silence that Trappist monks take. “If you think about your size in the context of the universe, the humility alone would silence you,” he says.

Deep musings like this are not uncommon in conversation with Michelini, though sometimes they weigh him down more than others. He grew up in a very religious family in Tom’s River, New Jersey, and he says when he moved to Philly, it was his first time being completely removed from the church, and from religion at large. He began to rethink the ideas he’d been taught all his life.

“I just kind of let go for a second, and thought about my existence in the context of right now,” he says. “Being alive right now, and this being all there is. And at first it was a really liberating experience, and I sing about that some on the record. And afterward, I feel into this deep, deep existential dread that I feel like I haven’t felt since I was 5 or 6.”

He became depressed, he says, and though he worked through some of those feelings of discarding religious dogma on the first American Trappist record, he’s not sure he’s totally out of the woods yet. “It was like, I felt good, I felt more current in some ways, like I was in my final physical form or something,” he says. “But it was just kind of a low point for me as well.” For a while, it remained difficult for him to get an emotional grip on life, and Tentanda Via documents that journey.

The soaring opener “Death Wish” is a heartland rocker setting the scene in a Petty via War on Drugs kind of way — his lyrics reflect on that unsettling fear, that loneliness, those moments when “there’s no one here i can call.” The minimal, haunting cabaret of “Other Reasons” unpacks feelings of self-doubt in the moment and the bigger picture: “so much eternity, feeling uncertainty / wish I could get behind the wheel sometimes.” Later, we ease into the murky synthesizer textures of “Unfresh Dirtwolf,” which takes the album briefly and unexpectedly (but awesomely) into Frank Ocean territory; pitch-shifted vocals provide either a voice of doom or the ultimate fly on the wall as Michelini wrestles with the great unknown, “not absent from the moment / but a vouyer to the world.” Wrapping on the horn-speckled rock of “Nobody’s Gonna Get My Soul,” the album comes to determined and confident resolve that will have Hold Steady fans on their feet.

Even in the face of cosmic uncertainty, Michelini has found his purpose by the record’s end, and in the real world, that means his studio. Though Tentanda was recorded at Trax East in South River, NJ with producer Pat Noon, Michelini’s primary focus alongside the band is his work at Berlin Studio, the Gibbsboro, NJ recording space he built in recent years, where Carroll, The Vernes, and others have recorded. Motivated by his newfound peers in the Philadelphia scene, he says “There was a certain point where I stopped wanting to compete.” In a way, the loss of God brought him closer to the humans around him, and Michelini’s goal is to do right by them as best as he can. That means approaching American Trappist with an equitable, professional model that guarantees money and autonomy for his bandmates and collaborators — a system he said River City never had — and it also means providing a space where he can help artists achieve their vision.

“Life is gonna be over sooner than I know it, I’m gonna make what I’m gonna make, there are so many great artists in Philly, and we have this little studio,” he says. “It’s nothing flashy, but I love working with songwriters, I love developing them and assisting in the process of getting them closer to where they want to be, whether through arrangement or songwriting. I love it so much more than emailing managers.”

That’s not to say American Trappist is a back-burner pursuit. He plans to take the band on tour this fall, with his friends in The Vernes. They’ll actually play a warm-up show this Saturday, August 25th, at Boot and Saddle, to celebrate Tentanda Via‘s release.

But in the bigger picture — something he saw after all that existential wrangling — his goal is less focused on self. “I want to be whatever the scene or the musicians around me needed me to be.”

American Trappist headlines Boot and Saddle on Friday, August 25th. Tickets and more information on the concert can be found at the XPN Concert Calendar.