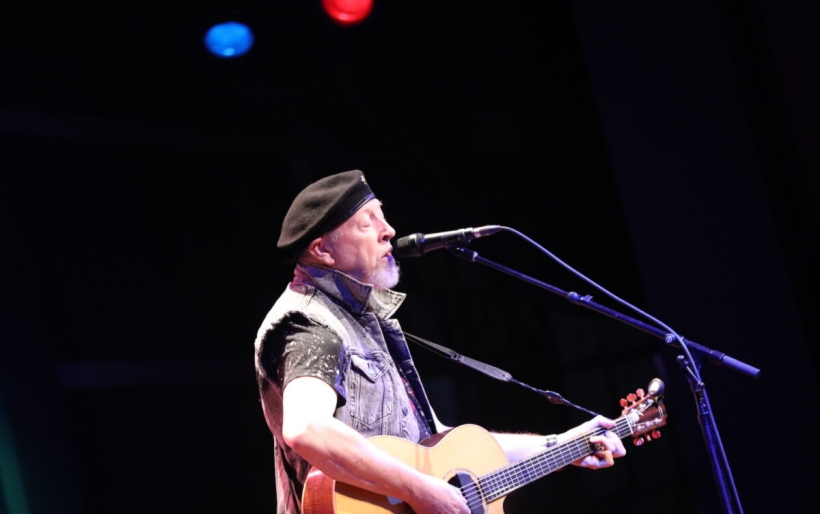 “For those of you listening on radio we have a room full of people here,” mused Richard Thompson at today’s Free at Noon, waiting only until the packed house finished their cheers to add, “a room full of people skiving off work!” Nobody can say Thompson doesn’t have a keen sense of humor, even if his songs are usually more likely to inspire tears than laughter. It’s a testament to his mastery as a performer that despite the emotional weight of his eight-song set, Thompson kept the Free at Noon crowd lively and captivated with his charming stage presence and unparalleled musicianship.

Alone with an acoustic guitar, dressed in his usual guerilla-chic style, Thompson commanded the stage. His set drew heavily from his upcoming album 13 Ways, including the opener “Trying” which immediately set the tone of the show with its moody drone and rapid, swirling arpeggios. The new material was heavy, both musically and lyrically. “The Rattle Within” saw Thompson setting existential dread to a lurching beat and a fiery guitar solo. A true master of his instrument, it seemed at times he was capturing the sound of a full band with just six strings. But the darkness was always offset by his warm banter—delivered in his Alan Rickman-esque baritone—that included a loving tribute to WXPN as “one of about four stations in the US that are any good at all.” We’ll consider that high praise!

Along with new material, Thompson closed two fan-favorites, the stirring “Persuasion” and the all-time classic “Vincent Black Lightning 1952”, both of which drew massive cheers of recognition. The latter showcased some mind-blowing finger picking and a set of Thompson’s most heartfelt, gut-wrenching lyrics. There may have been dry eyes in the house, but I wouldn’t know. It’s hard not to be overwhelmed when watching a master of a craft perform at their peak.

Richard Thompson will perform with his Electric Trio at the Keswick Theatre on 11/10 and 13 Rivers will be available on 9/14. Listen to his Free at Noon performance in its entirety below. 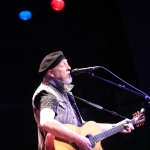