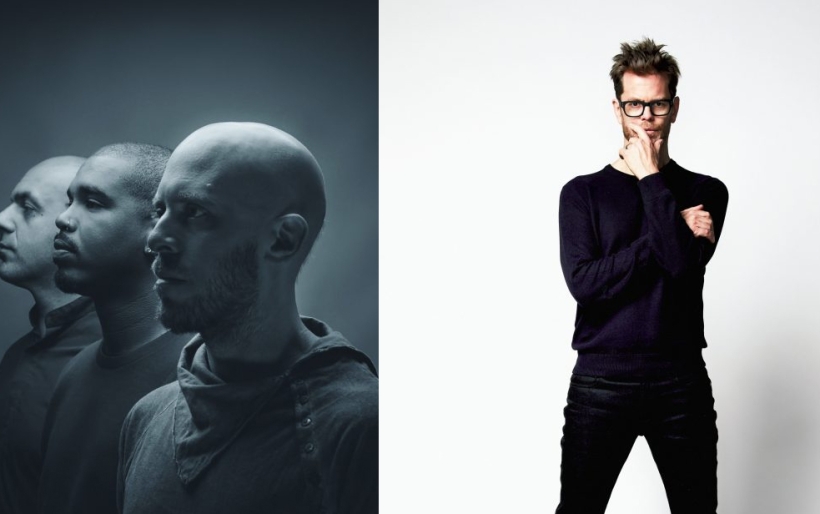 Donny McCaslin and Jason Lindner: The boys of Blackstar go beyond Bowie with Blow and The Buffering Cocoon

Tony Visconti and David Bowie walk into a bar. That sounds like the beginning of a joke.

Yet, that very real visit from the pair – in the spring of 2014, into 55 Bar, a longtime West Village jazz joint – is how the relationship between the Bowie-Visconti team, saxophonist Donny McCaslin, and his band of renown (drummer Mark Guiliana, keyboardist Jason Lindner, bassist Tim Lefebvre) began.

Their collaborative work on Bowie’s 2016 Blackstar would have been the stuff of legend even if the British experimentalist had not have died immediately following the album’s release. Blackstar was dark, spacious, free jazz-inspired electronic rock reminiscent of Bowie’s Berlin trilogy and its mad Manhattan follow-up (Low, Heroes, Lodger, Scary Monsters), yet, boldly new, inventive, genre-less, and often in tune with what McCaslin, Lindner and Co. recorded and performed before that auspicious meeting.

Which brings us exactly to where McCaslin and Lindner are now, with the former’s soon-released new album, Blow, his tour kick-off tomorrow night at Union Stage in D.C., and the newly-rescheduled show at The Foundry of The Fillmore Philly on January 12th, as well as the latter’s first album since Blackstar, The Buffering Cocoon, recorded with his Now Vs Now trio and out September 14.

That McCaslin and Lindner continue collaborating  – the keyboardist is currently touring with the saxophonist as he’s long been part of Donny’s band – shows of the fruits of a handsomely aged friendship, as well as a dedication to furthered co-joined experimentation.

“I feel like the relationship between Donny and I is always changing – as artists, as colleagues, as friends,” said Lindner. “It’s growing. It’s deepening. Has it changed suddenly and drastically pre- and post-Blackstar? No, I do not believe so. That experience only strengthened our artistic bond.”

Without giving Blackstar all the credit, asking Lindner about using Bowie’s signature arching theatrical chord passages and such going forward in his own work, comes with the perception of the experience of working with the Brit icon as being an elevator to a higher plateau. “It feels like that,” said Lindner.

“Bowie communicated something beyond words or explanation to me — I’m not unique in this — just as I will in turn communicate and transfer whatever I’ve received from him to others who are seeking knowledge from me. Now, if Mr. Bowie didn’t particularly mean anything special to me, I probably wouldn’t feel this way, and the whole experience might be just ‘a day at the office.’ But I happen to believe he’s one of modern time’s great evolving multi-platform performing and recording artists. So working with him was honestly pure inspiration. He showed us how he did it, right in front of us in real time, we saw it with our own eyes and felt it in our being, and we witnessed and were part of a process which led to the formation of an historic album. It’s beyond imitation and analysis. It’s pure artistic and human transference and it only happens when one is willing and able to receive it.”

Ask Lindner if this group of men will ever get over Blackstar and its “Band of Brothers” experience, and the keyboardist says, “Nope. Never. It’s a part of us. It’s us. It’s a bond.”

McCaslin agrees that living through the Bowie experience set him and Lindner apart from other musicians in many ways. “The bond we’ve had already, for a while, was deep,” said the saxophonist. “The Bowie experience certainly deepened that. But, I would say that – say, on an album such as Blow – there’s been so much time spent with its crew, and on the road together, that we’re developing together in another way. And that feels cohesive, because of that time spent as one, on the bandstand, grinding it out.”

In that respect, Bowie’s Blackstar is a chapter of McCaslin’s life, a dense and inspiring set of creative and personal circumstances, innovations and inspirations. Yet, as a receptor and a vessel looking to intercept signals from mid-air, McCaslin is always looking for extraordinary collaborators. Bowie simply raised the bar to an incredibly ridiculous high.

“What lingers from working with Bowie — be it songwriting, or arranging, or creating in general — is that I am inspired by his fearlessness and his openness,” said McCaslin. “So when I think of people I’m working with on this album such as Ryan Dahl who collaborated with me on “Club Kidd,” and “What About the Body?”…. his lyrics are fearless to me.”

Fearlessness then, is the new measuring stick for McCaslin’s art form. “Jeff Taylor who collaborated with me on ‘Tempest,’ and ‘Tiny Kingdom,’ he’s a fearless performer. He’s touring with me, now,” he explains. “Mark Kozelek is on the new album, and both Bowie and Visconti happened be big Kozelek fans. I was a fan of Mark’s Sun Kil Moon too, and when Steve Wall (Blow producer) talked about having a mood piece where the narrative drove the energy of the song, where the dynamics of it all came from the narrative – that’s Mark’s thing, That’s how we got him for the album’s opening. That there’s an aesthetic connection between he, I and Bowie / Visconti is but another element.

“And when it comes to Gail Ann playing bass… we can delve into that all day,” McCaslin concluded with a laugh as he reflected collaborating for Blow with Ms. Dorsey, Bowie’s longtime bassist. “’Tiny Kingdom,’ too, in hindsight has a woodwind arrangement that’s reminiscent of the spirit of Blackstar; not conscious, but rather a sprinkling of its stardust.”

McCaslin sees other aspects of who he is as player having changed since Blackstar and his own Beyond Now, of that same year. On the sonic end of things (“and this too is connected to Bowie, while hanging out”), looping things live on the saxophone while improvising with the group, on stage, is a large part of where McCaslin is going. “That was an interesting observation of his — fast forward a year, I’m experimenting with pedals, and manipulating the sounds while live. It’s grown to the point that, on Blow, the saxophone’s sound, changing from song-to-song, is manipulated on every track — be it distortion or reverb or what-not.”

Does playing straight or acoustically or sans FX even interest McCaslin at this point now that he’s gone all-manipulation in terms of sound? “It appeals to me, sure, but I guess I’m going for broke as to what is really exciting to me right now, and that is what I’m doing on Blow.

One thing that makes us both laugh is when I bring up the last time we saw each other, which happened to be at Delaware’s Arden Concert Gild, in January 2017, one year after Bowie’s death.  It was at that gig, claims McCaslin, that he brought some music to sound check. “It was sketchy stuff, but we jammed on it, and that was the start of the process that became Blow…. a gradual epiphany, if you like, where I wasn’t clear where it was going, but that I knew that I wanted to be electric, that I was approaching new territory. That was the beginning of the last year, and back-and-forth of Blow.” Talk to Lindner about where he is going, inspired as he is by electronic music production and solo performance, and the possibilities and options are daunting. “I’m trying to work organically with tools I’ve already got a grip on — analog synths and various bits of hardware, some looping, some MIDI connectivity — and then take it from there.” Where he has wound up, with his trio, now, is with a metaphorical cocoon imagery, real and imagined, that coats his new record in a shrouding protective warm vibe.

“You nailed it,” he said. “It’s meant to visually communicate a protective, warm vibe. Humanity is cocooning on several levels presently. People walk around in their cocoons. We aren’t limited by our physical reality anymore. In a bigger picture, we are at the beginning of the most significant species transformation since the evolution of Homo Sapiens, and even more shocking, since the creation of biological life-forms. Human beings are strong, innovative, wonderful, miraculous creatures, but we are also highly sensitive and vulnerable. We’ve all felt at various times this need for a warm, protective, comforting layer, just to get by.”

Along with gigging with McCaslin and playing on Blow (“It’s awesome; maybe the most unique, conceptual and surprising thing he’s done. There’s something brave and bold about it, even to the album artwork. I’m very proud have played a part. It’s just blazing”), Lindner sees his background as an instrumentalist and unofficial ethnomusicologist as helping him to approach electronics from a certain angle.

“’Next’ for me means continuing to follow my own artistic path while reflecting what’s going on with our planet,” he says.

Donny McCaslin’s tour in support of Blow kicks off tomorrow at Union Hall in D.C.; a previously-scheduled show at The Foundry of The Fillmore Philadelphia has been moved to January 12th, and all original tickets will be honored. More information can be found at the XPN Concert Calendar.