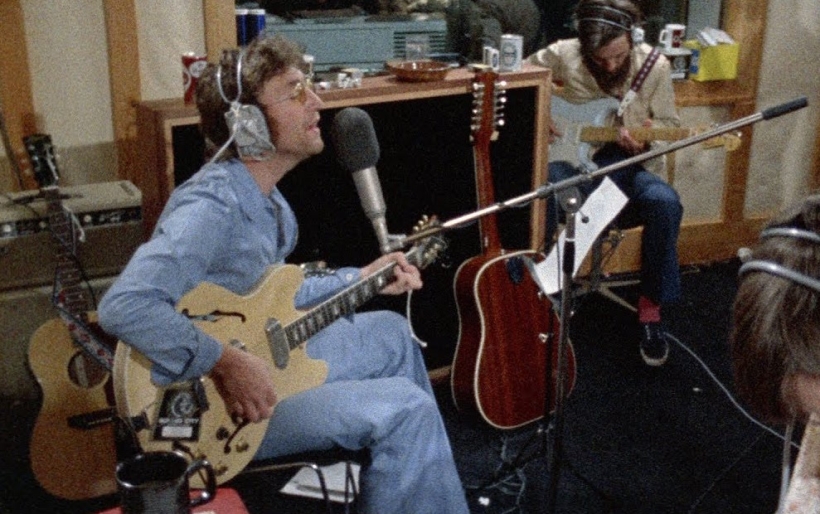 John Lennon and George Harrison in the studio | still from video

Today brings a great surprise to Beatles fans of the world—who we estimate make up about 100% of the WXPN audience. In anticipation of the upcoming reissue of John Lennon’s seminal 1971 LP Imagine, the Lennon estate has released previously unseen footage from recording sessions for the song “How Do You Sleep?” Those who know their fab-four history will remember this song as Lennon’s post-Beatles diss track to Paul McCartney. Recorded just two years after the band’s breakup, it contains such biting lyrics as “those freaks was right when they said you was dead” and “the only thing you done was yesterday.” It’s a fascinating document, showcasing the sheer pettiness that lingered from the Beatles’ end days. Some might call it a sort of a fitting metaphor that the ultimate icons of 60’s peace and love would start the 70’s with an egoistic feud.

Cultural implications aside, the footage is compelling for many other reasons. For one, it features a standout performance from George Harrison, who delivers some particularly soulful slide guitar. His restrained solo exemplifies the subtle mastery of the quiet Beatle. Equally impressive is the sheer rawness of the footage. In its released version, “How Do You Sleep?” features generous echo effects and lush strings. Here, it’s reduced to nothing more than a band in a room.

Surrounded by cigarette boxes and soda cans, the band in question seems to be at the end of a long night. Bassist Klaus Voormann looks practically asleep at his instrument. Meanwhile, Lennon’s vocals are almost gratingly dry, stripped of their usual studio processing, exposing every strain and rattle in his voice. But rather than weaken the track, this bone-dry approach draws out the song’s emotional sting to great effect. Lennon must have learned something from the experience, because he’d go on to fully embrace this minimal production style for his magnum opus, Plastic Ono Band. In a world of ultra-processed media presence, it’s a rare treat to see the artistic process unfolding more or less as it happened.

Watch the video below. Imagine: The Ultimate Collection will be available on 10/6.