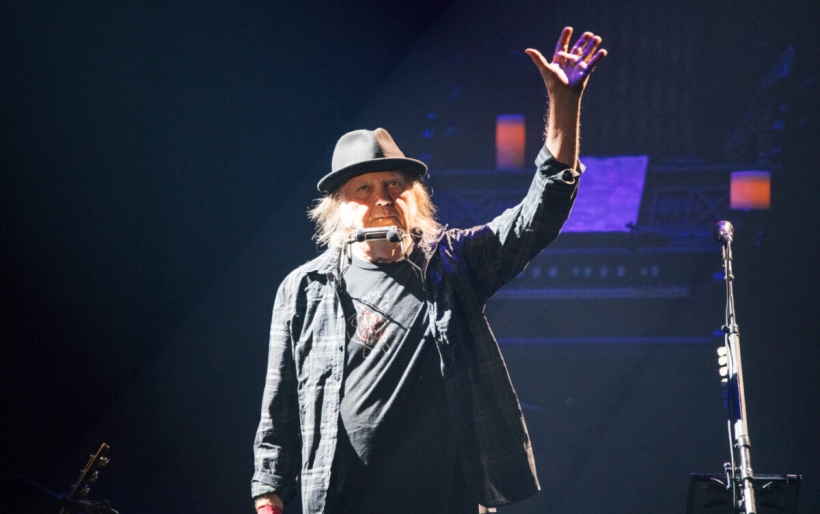 You know how you have instincts about things, and you’re pushed to trust them above all reason?

I had a feeling about that pump organ of Neil Young’s, the one he brings on stage when he performs as a solo act; that he would save its… hmm…pumping for the second of two sold out Tower Theatre shows. And from what I heard from my many-beer-drinking neighbors seated in my row at the Tower last night — the second of his two-night stand — I was correct In my choosing. “Brother, you got the pump,” the one gentleman yelled.

I did. I did indeed.

As with most solo Shakey shows (his nickname, as well as something he confessed to being before performing a quiet Ian & Sylvia cover, “Four Strong Winds”), Young stands before a battery of acoustic guitars, pianos, harmonicas he will obsessively dip into water, banjos, his longtime stage-mate “Woody,” the cigar store Indian, and that organ. He will have a ukulele (whose actual playing he reserved for the tender, tiny, childlike encore of “Tumbleweed”). His road crew will foist harmonica straps to his head, and usher out large white electric guitars for blistering rock-outs on the likes of “Ohio” where, even though he is supposed to be choosing songs and instruments by instinct, is lit to shadowy noir perfection, billowing smoke clouds to boot. Hey, some improvisational dramas you just have to have planned in advance. That’s instinct for you: have a game plan.

That’s just me grousing. The one thing about this solo show (beyond the truly cool Star Wars themed SOLO t-shirts being sold) that truly got me, was how amazingly adept, finessed and downright pretty Young’s finest moments sounded on this night. Most particularly, his acoustic guitars’ voicings were lustrous in the execution and sophisticatedly folk-jazzy in their melodic sway – all of which allowed the handsomely squeaky vocalist a lovely gentler ride than usual.

“There are eight verses, and I’m just trying to remember them,” he said before fully sincerely launching into his first number, “The Last Trip to Tulsa,” with its post-psychedelic/Beat era lyrics in full holy goof display (“Well, I used to drive a cab, you know / I heard a siren scream / Pulled over to the corner / And I fell into a dream”).

From there, Young made the usually grouchy, grungy Crazy Horse cut, “Thrasher,” as gorgeous, gleaming and plaintive as he did another soft, Horse favorite, a tender “Pocahontas” – all with two of Young’s loveliest country-ish ballads, a yawning “Comes a Time,” and “Lotta Love” sandwich-ed between the Crazy.

No sooner than he closed out an effervescent “Only Love Can Break Your Heart,” with his squawky voice at its most even, he sailed into “Mellow My Mind,” with his guitjo in his hand and continued on to, somehow, make that clucking, clicking stringed thing soothing and sweet. Though “Ohio” was the big protest song that everyone thirsted for, and got, my money and my mind was on the early days rant of “Speakin’ Out” from Tonight’s the Night. He softly hammed it out on upright piano, then led into his chosen pump organ-filled prayer for the land and its salvation, “Mother Earth (Natural Anthem).”

He spoke softer and carried the big stick of quietude, subtlety and sonorous melody, and somehow that worked out better than Young’s blistering bluster this time out. With that, the electric-filled “Children of Destiny” felt a tad out place – almost thrown in to wake up the liquor-soaked rummies who nodded out in the middle of the set. As far as I was concentered, Neil got me in that quiet and lovely mood with buffered piano-laced Buffalo Springfield numbers, “Expecting to Fly” and “Broken Arrow,” as well as the back-to-back pairing of the broken “Tonight’s the Night,” and “Horseshoe Man.” It’s still one of his loneliest songs — “Two lovers long ago / Took a vow to live with heartbreak” — and that’s where I wanted to stay.

Still do, quite frankly. Nice show.