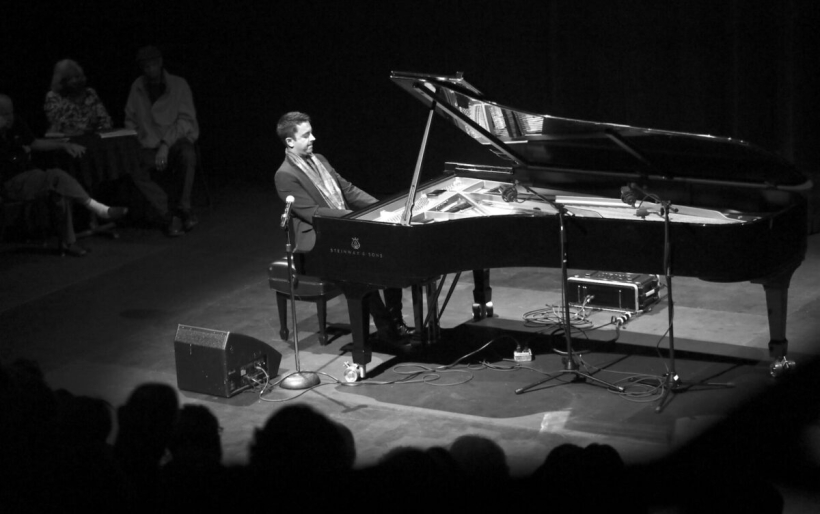 If you’ve dedicated any portion of your life to obsessively writing about rock and pop, you’ve probably arrived at an eventual point where rock and pop alone become…boring. Uninspired. You begin to explore other sounds, to expand your proverbial horizons. Sometimes the process can be gradual, and sometimes the gates can blow wide open.

For me, a major entry point not only into jazz, but the possibilities of what music can sound like using jazz as a baseline, was a hand-me-down vinyl copy of Keith Jarrett’s The Köln Concert, a double LP, 66-minute, entirely improvised concert where the famed pianist for Art Blakey and Miles Davis rocked to and fro across 88 keys, punctuating his playing occasionally with moans and cries, finding himself in moments of cathederal-like reverence, and later cascading into dissonant depths.

Watching award-winning jazz band leader, composer, and scholar Vijay Iyer give a rare solo performance at the Annenberg Center’s Harold Prince Theatre on Saturday night, I was very much reminded of Jarrett, and this album in particular. Performing two sets in just over two hours on a mirror-shiny Steinway grand piano, Iyer filled the small Walnut Street performance space with sound that ran the gamut from beautiful to bombastic, to points that were simply unbelievable — the number of notes bursting into the air per second, the lightning-like rapidity of his writs and fingers. For myself, Iyer elevated from a name that I had grown accustomed to seeing in jazz listings to an artist I was spending quality headphone time with last year, thanks to the acclaim surrounding Far From Over, the first album from his Sextet. It took his playing into the realms of the experimental, creating an uneasy ambience and channeling themes of resistance and revolution. He was the subject of a fascinating spotlight on NPR’s Morning Edition around the time of its release, and our Shaun Brady sang the album’s praises at the end of the year.

None of the pieces he played at Annenberg came from that album, however. If we’re being honest here, I’d be hard pressed to tell you if the performance drew on Iyer’s vast, vast back catalogue — the 46-year-old pianist has been releasing music since 1995, both solo and in various ensembles, as well as collaborations with names that include Amiri Baraka and Das Racist — or if it was a showcase of new compositions, or (like Jarrett) entirely improvised.

What I can tell you is this: Iyer is a master concert pianist, a conduit for transforming mood into melody. On his left hand, a repeated pattern of bass notes thrummed, while his right hand plucked out dazzling bursts of half tones and quarter tones meshing together in a kaleidoscopic tapestry. At least, that is, until his wrists crossed over top of one another, and the high notes became the steady drone, while the fireworks were happening on the low end.

The music was kinetic as much as it was elegiac; one particularly expansive piece began with the thunder of fist-hammered bass keys that seemed to conjur billowing skies in the way that Beethoven’s Pastoral Symphony emulated changing weather during a stroll in the Viennese countryside. However, this piece offered little reprieve from the storm, as both of Iyer’s arms flew with ferocity, extending and retracting to the ends of the keyboard and back to the middle. This was the one where his body moved the fastest, almost to the point where he appeared like film stock played at double speed. The piece wound down its pace at various points over ten-plus minutes, but never the intensity, as even at its slowest and most minimal, it was still haunting and funereal.

But as much as this performance was a showcase of unbridled skill and ability, it was also a showcase of Iyer’s range, as one piece in the second set felt nestled in a more conventional, comfortable space between the swing of Count Basie and free jazz explorations of Cecil Taylor. Regardless of the tone, though, the audience was held in rapt attention — so much so that the crinkling of a plastic bag in the balcony, or the sound of my camera shutter, actually did feel like they were impacting the mood. Each set ended with a standing ovation, where Iyer stood at the Steinway, smiling sheepishly at the room. It barely looked like he’d broken a sweat. 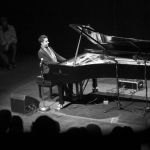