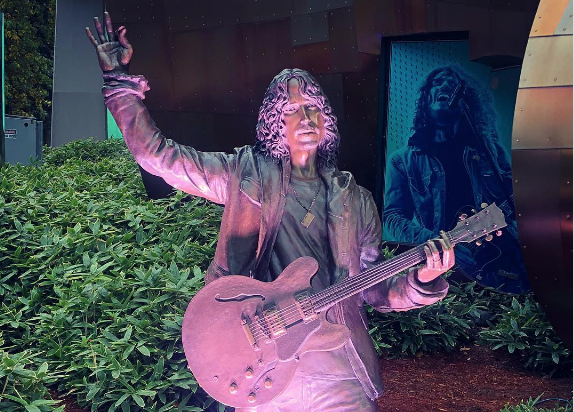 A life-size bronze sculpture depicting the late Soundgarden frontman Chris Cornell now stands in his hometown of Seattle at the entrance to the Museum of Pop Culture. Commissioned by Cornell’s late wife, Vicky, and designed by artist Nick Marra, it made its debut yesterday in a ceremony where Cornell’s children — Lily, 18; Toni, 14; and Christopher, 13 — did the unveiling.

In the ceremony, Jasen Emmons, Artistic Director of MoPOP, quoted Cornell’s “Black Hole Sun” lyric “Heaven send hell away / no one sings like you anymore,” while Vicky Cornell remembered her late husband’s inspirational force as a songwriter, as well as his role as a beacon that helped draw outside eyes to Seattle’s music community in the 80s and 90s. “[The statue is] a reflection of his light, a light that shone through his music, and touched millions. A light that he used to illuminate our lives, a light that will continue to inspire those in the future.”

The kids of #ChrisCornell unveil his statue that will now forever stand in his memory in #Seattle. #KOMONews#MoPOPpic.twitter.com/aV1ha2Dc4Y