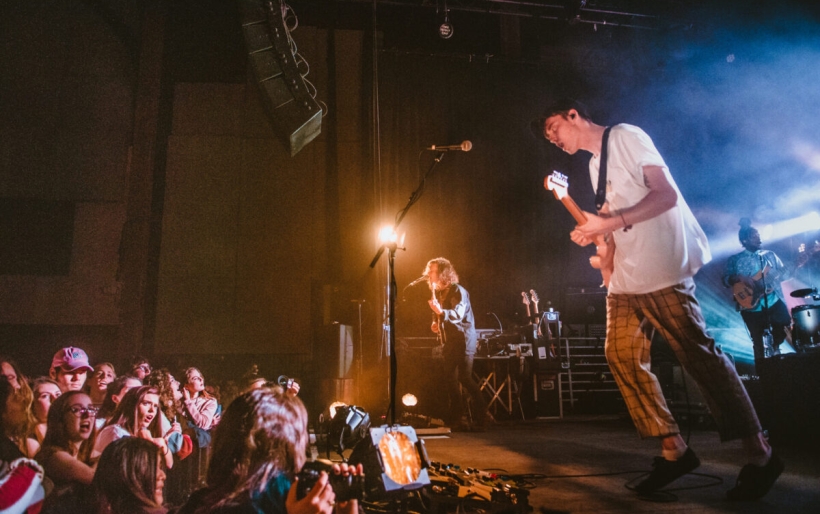 Last night, Minnesota indie rockers Hippo Campus joined the crowd at Union Transfer to celebrate the release of their newest LP, Bambi. They brought to the stage their instantly recognizable bubbly, ethereal, and smooth-yet-edgy sound to the stage, and then amplified it times ten. Singer Jake Luppen dove right into the new stuff, opening the show with the relaxed and pulsing track “Bambi,” followed by “Honestly,” and then the off-kilter, electro-rock “Doubt.” What a way to kick things off, honestly. These guys are loads of fun, and the set was atmospheric and loud and both gentle and aggressive when the tracks called for a change of pace. Ever appreciative of the crowd, as most bands who roll through Philly are, both Luppen and guitarist Nathan Stocker thanked us several times just for being there.

While I’ll always be a huge fan of Jake Luppen’s wide-ranged and emphatic vocals, a show stealer of the night was trumpeter DeCarlo Jackson, who took on incredible brass solos and was absolutely an element of the show that would have been missed if he wasn’t there. That extra instrumentation really pulled most of the songs together, and he had such an excitable stage presence that made him all the more magnetizing to watch. I’m always very appreciative for the way bands work together onstage, and Hippo Campus is definitely one whose energy feeds off of each member. There wasn’t a still moment unless they intended it, and even when songs built and built and finally reached that climactic explosion of sound, they still held it all together and performed. The lights were simple but emphatic and effective, lighting up Luppen up on his own when things died down during the grounding and tender “Monsoon,” and pulsing quickly between the other band members when things got hectic again during “Bubbles.” The energy, in total, was calculatedly all over the map.

Notable tracks included hits from Landmark, “Way It Goes,” and the ending anthemic “Buttercup,” which was a personal favorite of mine. They came back out for a one-song encore of “Violet,” and I’m happy they saved that one for the very end. The final chorus was incredibly unifying between the singer and the crowd, and I think most of us live for that adrenaline-rush of a moment.

Union Transfer was the place to be last night. Hippo Campus continues their tour with Palm for two nights in New York before looping back down to Pittsburgh on the 22nd. You can stream Bambi everywhere now. 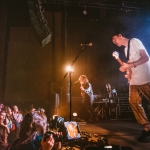