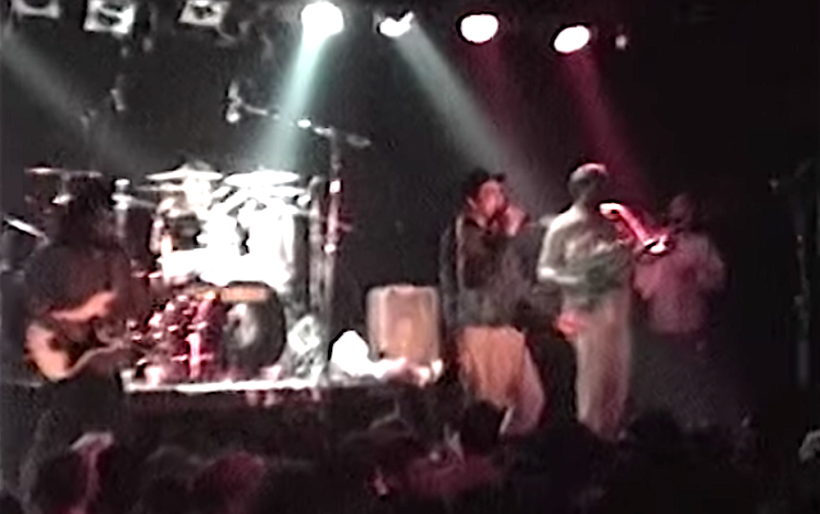 Is there a venue in South Jersey more legendary than City Gardens? Is there a band in punk more fraught with turmoil than Bad Brains?

Here’s a snippet of a night on October 20th, 1991, when the energies of the Trenton club and the energies of the D.C. icons converged. Of course, it’s the third or fourth make of the Bad Brains lineup…so their energies are probably not the same as they were in the “Banned in D.C.” years. Core members Dr. Know on guitar and Darryl Jennifer on bass are rocking their distinctive interplay throughout, but if you’re looking at that grainy VHS transfer footage and thinking “Hmmmm, I don’t remember H.R. being that ripped,” your eyes are not playing tricks on you.

This concert took place after the second time the legendary and controversial vocalist departed the band along with his brother, drummer Earl Hudson — supposedly, the reason had to do with disagreements over whether Bad Brains should lean more to their punk side, or their dub/reggae side. This short-lived version of the band features Mackie Jayson on drums and Chuck Mosely on vocals, and if you’re picking up a LA style alternative funk rock groove going on with these performances, your ears are not playing tricks on you. Mosely joined the band briefly from a stint as lead vocalist in Faith No More, and while the songs are essentially the same as their recorded versions, it does sound a bit like this make of Bad Brains was catering a bit to their new lead vocalist’s background with their playing. (UPDATE: It has come to my attention via social media commentary that this era of Bad Brains is referred to by fans as “Sad Brains.” Aw.)

In this clip, we hear the sauntering “With The Quickness” from the band’s 1989 album Quickness, as well a slamming “House of Suffering” and “Sacred Love” from 1986’s I Against I, with the former dedicated to the city of Trenton. We also see a hyper-energized City Gardens crowd pogoing, practically smashing into the lens, to the point where the shot becomes an oddly angled look at the tops of heads and the spotlight row…we imagine because the camera op is holding the camcorder tightly to their chest to protect it from the “Suffering” melee.

From here, the Bad Brains lineup timeline on Wikipedia turns into something of a Tetris board; the band went through a couple more drummers, including Philly’s Chuck Treece. After a year at the mic, Mosley left, and was replaced by Israel Joseph I. H.R. rejoined the band in 1995, then they broke up again. Amazingly, even though Bad Brains performances are rare in this day and age, the lineup features the original four members who made their self-titled debut and Rock for Light.

City Gardens was in the autumn of its years at this point; it opened in 1979, and closed for good in 2001. The building still sits unused at the north side of town, not too far from a sports complex and Chinese takeout place.