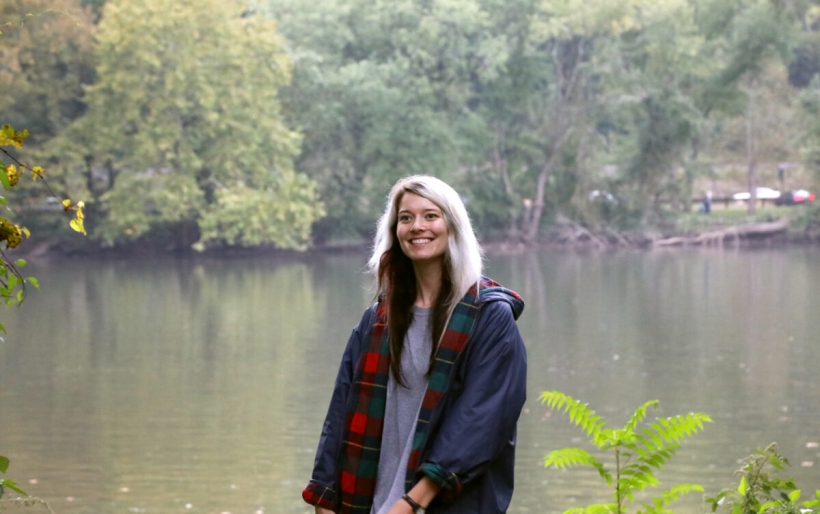 Abi Reimold | photo by Emily Kuhar | courtesy of the artist

While Abi Reimold’s song are intensely personal, their love of photography is based around capturing others. On their album covers, they combine the two passions. The photograph on their most recent LP, 2016’s Wriggling, centers around a bowl of worms on a clean white table, the creatures writhing and wrapping around each other.

“I just liked the idiom: ‘opening a can of worms.’ I felt like that would tie the songs together very well,” Reimold said while munching on a salad bowl, seated across from me at a table on Walnut Street. “[It’s about] getting through things, and even though you can be in a situation or a mindset, and feel those feelings, that doesn’t mean that’ll be something permanent.”

Reimold recounted taking the shot that would become the cover of Wriggling. Filmmaker J. Miller was documenting the process, the room was set up. They just needed one thing: the worms. For that, Reimold went to their gardener friend, Katy.

“She was like, ‘Actually, I have a bunch of worms in my bathtub!’ It was really serendipitous.”

Reimold’s path to music was equally serendipitous. Growing up in Haverford, they considered being a vet for a long time; studying journalism at Temple University, they began working locally as a photographer (interning with The Key in 2013), and still shoots weddings to this day. As Reimold discovered the Philly DIY scene as a fan and photographer, their own music began taking shape.

“I know for me, I had insane performance anxiety when I started doing this,” Reimold explained, “so it really helped to have a lot of shows under my belt that were pretty low pressure because they were in non-traditional spaces.” First, Reimold began releasing music under their own name. Then they started working with Hour, a six-piece instrumental group where they play guitar. That band just released its second album, the meditative Anemone Red, via Lily Tapes and Discs, and plays its album release show Thursday, November 8th at Fishtown venue Beacon.

Reimold’s own music is dark and visceral, and uses imagery that is as surreal as it is nauseating. On “Dust,” they sing, “I will learn what dust tastes like, I am not immune.” Others, like “Arranged,” are more verbose: “Little bumps that grow on skin and don’t let other people in / I’ll wash them off with astringent, I’ll eat the words I never meant” Reimold plays around with their voice throughout, growling one song then building to a scream the next.

“In high school I was in choir, and that definitely was a big thing for me, to realize that I could sing,” Reimold recalls. “It was really fun to do that. The teacher was a really inspiring person who pushed us to get better.”

But how did Reimold’s one-person shows lead to working with a sextet like Hour – or to the three-piece rock band that backs their bigger solo gigs, like opening for The Districts at Union Transfer? When I ask this, they began by discussing a recent solo tour with Quiet Slang: “I just feel like I was a part of something really special. The energy in the rooms was heartfelt and intimate. Me playing solo worked really well in that context. But if I were to go on tour as an opener for a louder act, then a set with a backing band would be more fitting for the energy of the night.”

“It’s also really, really fun to be playing with a drummer and a bassist and have that power,” Reimold continues. “When you have a rhythm section, you get to relax a little bit. They’re holding it together, and I can be a little more free. When it’s just me, I do a lot of looping, so that has to be really precise.”

Considering the oft-melancholic tenor of their music, it was slightly incongruent to learn that Reimold does wedding photography as well. This feeling fades when Reimold begins talking about the profession.

“Everybody’s different, every wedding’s different. You’re not doing the same thing over and over again,” Reimold said, their voice picking up a fondness for the work. “My intention is to make [clients] feel comfortable and create images they feel flattered by. I’ll make suggestions as needed to get what I know will look good in the photos, just bringing whatever energy into the space that I think will work well.”

While discussing their work in photography, Reimold returned to the topic of working on album covers, and showed me a photo of a hand reaching out of a large cardboard box, in an empty black background. Text in the center reads: “Bigger Box”. The hand belongs to their friend Mike Cormier, who also is the songwriter for Hour.

“I’m excited about how this one turned out,” Reimold says. “I’m not finished with the recordings yet, but I’ve been sure of what I want the record to be for over a year, and the cover came out just as I had imagined.”

I noticed that Abi tends to think a good deal about their words. This shows in their music; every detail is considered from several angles. Across their songs, they carefully weigh the force of their ideas with the force of their vocals. Reimold said to me, “I guess your voice can change as you get older; I just hope [mine] gets more honest.” Abi Reimold | photo by Miranda Jayne | courtesy of the artist