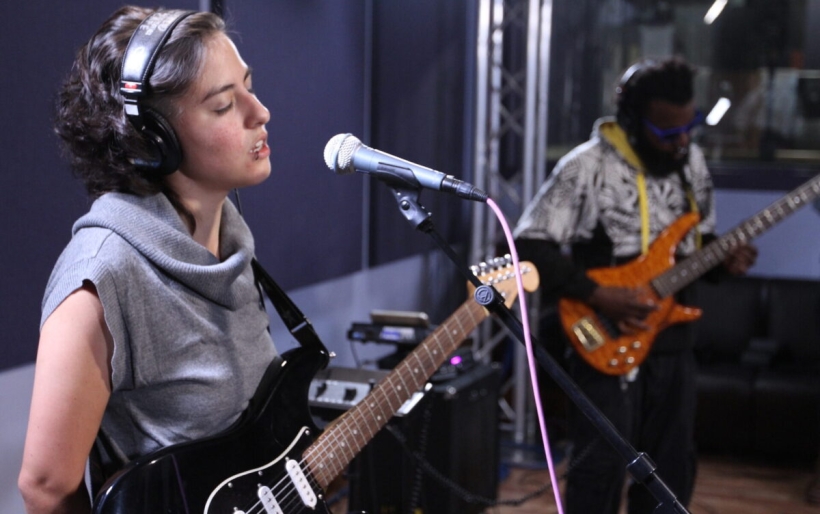 A fanfare greets you in the opening seconds of Interminable‘s Key Studio Sessions performance this week, and it has a very intentional effect. The sounds of two trumpets and a trombone immediately grabs any listener’s attention, and as the beat kicks in on “El Camino,” the band immediately comes together into a cool groove as frontperson and songwriter Ximena Viiolante sings about, well, coming together. Unity and forward-motion.

On the chorus, Violante’s voice soars with the line “Este camino es largo / Y lo llevaré en mi voz / Caminemos juntxs / pa’ que avancemos mejor,” which means “This journey is long, and I’ll carry that in my voice / let’s all walk together / so that we can move forward stronger.”

As a band, Interminable is a model of the sort of unity its lyrics aspire to. Violante has a background in son jarocho, a style of folk music from the Veracruz region of Mexico, and is also an educator who gives community workshops on the history and versatility of her chosen instrument, the jarana. Trumpet players Becca Graham and Marty Gottlieb-Hollis both play in the hip-hop ensemble Hardwork Movement, though Graham comes at it from a classical background, while Gottlieb-Hollis leans more jazz and experimental. Trombone player St. Clair Simmons III plays in jazz bands, salsa bands, cover bands — he’s a versatile musician as well, as is the rhythm section of Yeho Bostick (who also plays in the psychedelic ensemble Circadian Rhythms) and drummer Joe Perullo (who ranges from chamber rock with The Up and Ups to Latin jazz with Viva and the Reinforcements).

“We all come from these vastly different backgrounds,” reflects Graham. “But we’re able to come together and find encouragement to use those voices in the collective.”

In the studio this week, Interminable performed four songs from its forthcoming debut LP, rebirth::renacer, which releases on November 16th. Like “El Camino,” these songs focus on themes of time, shared identities, shared struggles, shared experiences, and a sense of positive stewardship of both our heritage and the world around us. The second song in their setlist, “Buscando Un Futuro,” means “searching for a future”; Violante says that’s “for ourselves, and our communities, even when we can’t see it.” On the album, it has a companion piece called “Buscando un Pasado,” which she says “is about searching for our past, even when it may not have been told to us, may not be in the books.”

The six-plus minute “Consecuencia” alternates between downbeat introspection and ebullient energy, while “Mi Fe” closes the set by imagining a different future while contending with an existent reality: “I spun back time looking to get ahead / got on my feet and now I’m back in bed,” Violante sings on the opening verse, followed by the lyric “I’d rather sleep than live a waking dream.”

Of the rebirth referenced in the album’s title, Violante has this to say:

“At this moment we’re seeing so much violence in many of our communities, not just national but international. I come from Mexico and we’re dealing with a lot of stuff there, too. It felt powerful for me to remember that, as creatives, as musicians…in the face of a lot of that destruction, we can create, and it feels like a rebirth. We can bring life into the world through songs, through community spaces, through supporting each other. That feels like a powerful thing to remember.”

Interminable will celebrate rebirth::renacer with a release day party at Creep Records in Northern Liberties on November 16th; Little Strike, who also releases a new album that day, will co-headline the show alongside them. Tickets and more information on the gig can be found at the XPN Concert Calendar.

Below, listen to Interminable’s entire session and interview, or stream the individual songs via Soundcloud.