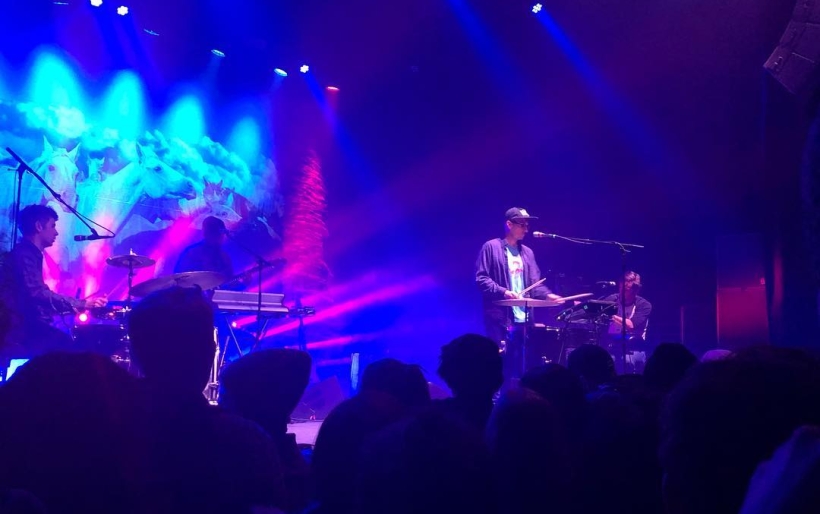 WHY? at Union Transfer | photo by Kristen Buroojy | courtesy of the artist

WHY? go back in time at Union Transfer

The sold out show at Union Transfer on Thursday night may not have been in celebration of The White Album’s 50th anniversary, Daydream Nation’s 30th birthday or Hello Nasty’s 20th. Try telling that to WHY? fans dedicated to bedsit recording artist/producer Yoni Wolf’s  lonely nasal bleats, angst-ridden cat-calls and literary referenced, socially astute songs, all of which found their fullest flower in 2008’s Alopecia – an album whose 10th anniversary was being celebrated that night. As the record that moved Yoni Wolf’s game from solitary to full-band recording (yes, his brother Josiah was always around) and from smallish art rap to somewhat grander chamber hop, the nerdy throng that sang every phrase back to the singer made it clear – Alopecia is their Pet Sounds, their teenage symphony to God, odds and sods.

The most fascinating thing about hearing Alopecia, “back to front,” and “turned to side two,” after “imaging you’re flipping the vinyl” (Wolf’s in-between song patter), was how much bigger Yoni and his WHY? troupe made the once-flowery epic. For example, the drum sounds were denser on tracks such as the disco thudding “The Hollows,” aided, in part, by the fact that Yoni pounded a set of synth snares, along with their drummer.

The other thing that grew in size was Wolf’s reedy voice. How much heartier his vocals sounded now — and live– than on the decade-old Anticon label classic. For example, the neat guitar pop of “Gnashville” and the Stereolab-ish harmony filled “Song of the Sad Assassin,” found the frontman’s vocals to be richer and more confident than recalled at the time of Alopecia’s release. “Sad Assassin,” in particular, found him loudly cramming many smart, silly phrases into its piano-pounded pop.

What once was angry metaphorically politicized resignation — on a slinky version of “These Few Presidents” — has turned to smug, cutting and direct disgust, as his cheer turned into a sneer. “By Torpedo or Crohn’s” lifted itself into something elegiac in a live setting, not because Wolf suffers from the disease, but because you could hear him wrangling with the harsh and darkly humorous differences in dying from war or disease even now.

And while it was delicious hearing 2017’s snorting “This Ole King,” and “Crushed Bones” (from 2005’s Elephant Eyelash, yet), this was an Alopecia night, plain, simple and writ large.