What are YOU doing New Year's Eve? A guide to regional gigs for ringing in 2019, from Hardwork Movement to Hop Along - WXPN | Vinyl At Heart 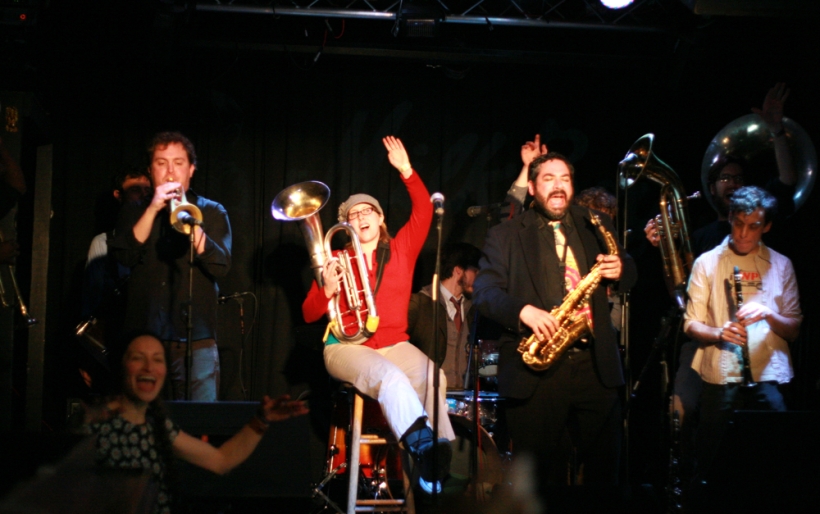 What are YOU doing New Year’s Eve? A guide to regional gigs for ringing in 2019, from Hardwork Movement to Hop Along

By Sarah Hojsak
December 20, 2018
09:12 AM
Share
West Philadelphia Orchestra will play Underground Arts to ring in 2018 | Photo by John Vettese

2018 is finally coming to an end, and I think we can all agree that’s something worth celebrating. But if you haven’t made your New Year’s Eve plans yet, you may want to act fast — concerts across town on December 31 are quickly selling out. Unless you scooped up your tickets early, you won’t be able to see Japanese Breakfast wrap up their three-night hometown run at Johnny Brenda’s or Aaron West & The Roaring Twenties, the solo project of The Wonder Years frontman Dan Campbell, play a gig at Boot & Saddle. But there’s some good news, too — as we get ready to usher in 2019, there are still plenty of shows happening across town that you can still find tickets for, including several performances by local Philly acts.

We found eight shows in Philly proper that you can still get into, plus a few more scattered throughout the region — from folk to funk to good ol’ indie rock, there’s something for everyone this New Year’s Eve.

It seems like every time they’re in town, They Might Be Giants play a show at the TLA. But hey, that’s a great place to spend New Year’s Eve, and it’s a prime time to catch the enduringly prolific band — not only did they begin 2018 by releasing their 20th studio album, I Like Fun, but followed it up already with two new concept LPs, My Murdered Remains (collected from their Dial-A-Song project) and The Escape Team, both out now. (TLA, $38, all ages)

Hometown favorites Low Cut Connie come highly recommended by Sir Elton John himself, so you know their show must be a good one. They’ll headline the Trocadero this NYE, closing out a busy year that included the release of their latest album Dirty Pictures (Part 2) in the spring. There are a few opening acts, but the one not to miss is &More, the new project of Donn T and Chill Moody that debuted earlier this year. (Trocadero, $25, 21+)

Legendary Philly jam/electronica (jamtronica?) band The Disco Biscuits is going all out this New Year with four consecutive shows at The Fillmore. The show on the 31st is technically sold out, but some verified resale tickets are still available, or you could choose to attend one the preceding three shows, all of which are still on sale, instead. It’s been awhile since we’ve seen our Biscuits play a hometown show, so this is a great opportunity to reconnect with the jam. (The Fillmore, $67, all ages)

“Established in the year 2000, Making Time is a TRANSCENDENTAL futuristic sound experience that has served as the supreme universal pinnacle of hyper-platonic mega-reality atomically assembled in its final pan-astral form as the earthly divination of pure & total radness for 17 years and counting.” That’s according to Making Time’s Facebook page, and pretty much tells you all you need to know. It’s rare that Union Transfer hosts 21+ show, but this ensures that attendees can indulge in an open bar all night long. (Union Transfer, $50, 21+)

If you have yet to check out the newly rebranded Electric Factory, now going by the name Franklin Music Hall, NYE brings a great chance to do just that. New York rapper A Boogie Wit Da Hoodie will perform, and opening up the show is Philly’s very own nine-piece power collective Hardwork Movement, whose local shows have become an integral part of the Philly music scene, are always worth catching if you’re in the mood for a fun, uplifting time.(Franklin Music Hall, $50, all ages)

It’s a stacked triple bill of unique local sounds at Underground Arts this New Year, with Balkan-folk-meets-brass powerhouse West Philadelphia Orchestra headlining a show that also includes psychedelic funk outfit Johnny Showcase & The Mystic Ticket, free jazz ensemble Sun Ra Arkestra, and beatmaker Mambisa. A few of these acts may have trouble fitting all their members onstage, but you can be sure they’ll bring the tunes. (Underground Arts, $40, 21+)

New Year’s Eve concerts can get pricey, but you can still enjoy a fun night of live music without hurting your wallet. Not only is the Lovelorn and Suburban Living double bill at Ortlieb’s a great value, it’s also the perfect opportunity to dig into some under-the-radar local music. Lovelorn, new darkwave project of the former members of Creepoid, formed just this year, while shoegazers Suburban Living released their debut album in 2016. (Ortlieb’s, $20, 21+)

Another affordable option is the Jersey Corn Pickers‘ show upstairs at World Cafe Live, and since it’s open to all ages you can bring the whole family to enjoy some bluegrass and Americana tunes. While they’re most often seen at outdoor folk festival performances in warmer weather, their inviting acoustic sound is sure to warm up the venue no matter how cold it is outside. (World Cafe Live Upstairs, $15, all ages)

There’s a party going on out in the suburbs this New Year’s Eve as well — Brazilian funk collective Philly Bloco takes the stage at 118 North, a newer venue in Wayne, for a late-night dance party. The 23-piece band (yes, 23-piece, and half are drummers!) is sure to provide some high-energy entertainment that will have attendees grooving in no time. No need to grab dinner first — the ticket price includes an open bar and a buffet, so it’s a one-stop shop for your entire evening’s entertainment. (118 North, $75-$85, 21+)

If you’re into the idea of a more lowkey evening, local singer-songwriter Jeffrey Gaines will be playing an intimate show out in Kennett Square. This is a great one to attend not only if you enjoy toned-down folk music, but also if you’d like to be in bed shortly after midnight — the show promises to be over by 11 p.m. There will also be a complimentary champagne toast to ring in the New Year; not sure if that’s before or after 12 o ‘clock but either way you’ll be able to catch some great music and still call it a night fairly early. (Kennett Flash, $40, all ages)

All you need to do to see the legendary David Bromberg this New Year’s Eve is make a short trip to Delaware. The Philly native and his quintet will play a show at Arden Gild Hall in his current hometown of Wilmington, and if we’re lucky we’ll hear a selection of his career-spanning hits, from his storied albums of the 70’s to his most recent LP, 2016’s The Blues, the Whole Blues, and Nothing But the Blues. This show also promises some midnight champagne. (Arden Gild Hall, $72-$79, all ages)

If Hop Along was playing a show in Philly this New Year’s Eve, it would absolutely be sold out by now. But they’re playing in Asbury Park instead, and tickets are still available, so you can still catch the local favorites — if you’re willing to make a trip out to Jersey. How great would it be to see The Key’s top album of 2018 performed live on New Year’s Eve, right? If you need even more incentive to make the trek, note that the venue doubles as a bowling alley AND a diner — you can’t find that here in Philly. (Asbury Lanes, $30, all ages)