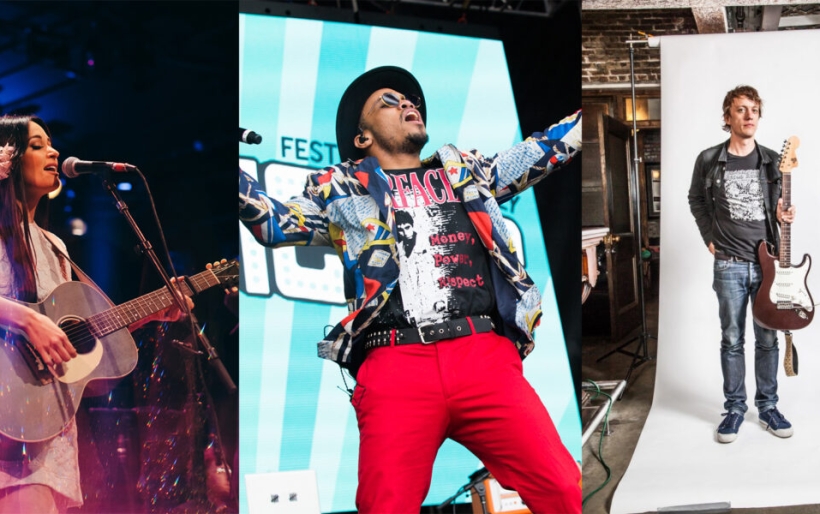 By The Key
December 31, 2018
09:12 AM
Share
Kacey Musgraves | photo by Senia Lopez for WXPN // Anderson .Paak | photo by Wendy McCardle for WXPN // Steve Gunn | photo by Josh Pelta-Heller for WXPN

After the excitement of ushering in the New Year, sometimes the winter months can become a bit bleak. The holiday season is over, but the freezing cold temperatures remain, and it can be tempting to stay indoors as much is possible. But we all know that the best way to keep the doldrums away is by catching some live music, and lucky for us there are a lot of great shows coming our way this winter. Here’s what The Key recommends. – Sarah Hojsak

With a knack for lively hooks reminiscent of Pixies and a propensity to thrash the ever-living hell out of their instruments like the best of the basement punk dwellers, Philly trio The Retinas are one of the more fun indie rockers around town. Their most recent EP, Yellow Rocket, dropped in September, and they’ll bring its spirited energy to the back room of Ortlieb’s for a solid early 2019 showing.(TIX) – John Vettese

Jersey thrashers Ruby the Hatchet recently wowed us as part of the Kensington Clearwater Revival tribute band that played a pre-holiday Free at Noon at WXPN. That was a surprisingly fun gig featuring three-fifths of this band, but believe me when I say they are at their best when they are focused on their own jams, which marry distortion pedals and occult vibes with frontwoman Jillian Taylors unparalleled vocals. (TIX) – J.V.

1/18: Kacey Musgraves and Natalie Prass at The Fillmore

Country favorite Kacey Musgraves released a true stunner of an album this year with Golden Hour, and she’s responsible for one of our most memorable Free at Noons of 2018. Thankfully, she’ll be back in Philly in a few weeks when her winter tour makes a stop at The Fillmore. Better yet, she’s bringing along the excellent Natalie Prass, who lit up the stage at XPN Fest this past summer with her grooving pop songs. (TIX) – S.H.

Philly rap mainstay Reef the Lost Cauze has been on the grind for 15 years, and his latest record — The Majestic, released on December 29th – is a masterpiece. It’s aggressive, it’s sensitive, it unpacks anger with the state of the world but sees love as the way through. Reef is already a commanding performer, but with this material on the table, his record release party at MilkBoy is not to be missed. (TIX) – J.V.

8-bit chiptune techno might be a thriving underground scene at the moment, but Philly’s Chromelodeon was pioneering it a decade and a half ago. Though its members have gone on to various other pursuits of unexpected styles, they’ve reconvened this winter for two nights at PhilaMOCA. The first time Chromelodeon was around, they gigged at places like The Khyber, or Port Richmond basements where projections were not as easy to pull off – with its giant screen and projection setup tapped into the bottomless audiovisual archive of YouTube, PhilaMOCA is the perfect place for them to not only reunite, but tap into a multi-sensory experience in a way they couldn’t do as much back in the day. (TIX / MORE TIX) – J.V.

There’s so much going for this gig; a practically full-roster reunion of one of the most iconic east coast rap groups of all time, a celebration of their first and arguably most important album. The only way this gig could be any better is if Ol’ Dirty Bastard rose from the great beyond to perform. (But please, please, no holograms.) Night two of their Franklin Music Hall stand is already sold out, but tickets remain for night one, so go get them. (TIX) – J.V.

1/24: Petal at the First Unitarian Church

Petal cemented herself as one of the region’s best up-and-coming artists this year with the release of her new album Magic Gone; we also saw her play Free at Noon in the summer. This February she’ll play the Church for the very first time — a huge milestone for any Philly artist — and you’ll want to be there to see it. (TIX)– SH

Taylor Goldsmith and his band of rock and roll good old boys took a dramatic turn on their 2018 album Passwords, reaching for the skies with the arena rock anthem “Living in the Future” and touring arenas with Jeff Lynne’s ELO. They’ll come back for their first headlining show since its release this February at The Fillmore. – J.V.

Lansdowne guitar wizard Steve Gunn is readying his latest LP, The Unseen In Between, for a January release on Matador Records, and though he’s been in Brooklyn since forever at this point, his Union Transfer shows always feel like hometown gigs. Catch him on Groundhog Day and pray that, like that Bill Murray movie, his nimble guitar licks and cruising atmospheres never end. – J.V.

2/2: Thin Lips and Grace Vonderkuhn at Boot and Saddle

Here’s another Groundhog Day gig that we would be 100% okay with it landing on repeat for all of eternity: Philly punk four-piece Thin Lips, who released a crusher of an album with this year’s Lame-O outing Chosen Family, and Wilmington’s Grace Vonderkuhn, whose Reveries also raged through the year. Expect lots of speedy riffs, distortion pedals, and devil-horn hands raised high. – J.V.

New Jersey-born singer-songwriter Sharon Van Etten returns with her first album in five years this winter, and surprise, it’s another masterpiece. The driving rocker “Comeback Kid” whetted our appetite for Remind Me Tomorrow from the get-go, but the true power of the record lies in slow burners like “Seventeen.” Bring tissues, but be ready to rage. – J.V.

Toronto rock juggernauts Metric have their shimmering modern rock style down to a science after almost two decades, mixing glam and punk and stadium love. They’ll be joined on this run by simpatico Mexico City band Zoé, who have been a reliably awesome force in the rock en espanol world since 1994. Two tremendously talented acts, plus its tight to see a tour of prominent artists from our two North American neighbors. – J.V.

Adrianne Lenker is best known for her work in Big Thief, one of the best and most prolific indie bands out there, but her incredible recent solo album abysskiss has us excited for her upcoming show at the Church. Her hushed, poetic songs show a quieter side of the songwriter’s work, and will make for the perfect soundtrack to a winter evening. (TIX)– SH

Lorely Rodriguez, the singer-songwriter and multi-instrumentalist behind Empress Of, is sounding more poppy than ever on this year’s Us, and that is absolutely a good thing. The 32-minute record is enchanting, funny, and life-affirming via bounding melodies and lyrics in English and Spanish. Even when it digs into the moodier textures of the project’s previous output, Empress Of has a way of making you feel good – and I’m excited to see that energy pack the small confines of Boot & Saddle. – J.V.

The suave and multi-faceted California singer / songwriter / producer / percussionist Brandon Paak Anderson — better known to you as Anderson .Paak — released his long-awaited third LP Oxnard this fall, and its Kendrick Lamar-featured single “Tints” alone made it worth the wait. Thankfully the whole set is full of sophisticated party jams that showcase Paak’s skill in everything he touches. This show will be his first proper headlining set since Malibu broke through (his Philly date on that tour was at Roots Picnic), meaning it’s a prime place to be for those of us who have catching up to do. (TIX) – J.V.

Rapper and criminal justice advocate Meek Mill has had what’s probably the most eventful year out of any musician, but that’s given him the chance to use his platform to do some inspiring work. We’re looking forward to his hometown appearance at The Met, which is part of his Motivation tour behind his new album Championships. (TIX)– SH

Who knows, maybe this pick is just for olds like me. Or maybe, just maybe, Massive Attack’s Mezzanine is such a front-to-back tour-de-force that whoever switches it on will be galvanized. The classic album of the electronica era turned 20 this year, but the band its doing its MezzanineXX tour in 2019 because…scheduling is a beast? Who knows. All that’s for sure is that being there when “Angel” rips the roof will be a sight to behold. – J.V.

This is a bigger venue than Lucy Dacus has played in Philly before, and we’re excited to see how her dynamic songs fill the space. The singer-songwriter released the acclaimed Historian early this year, and has gained even more attention in recent months after teaming up with Phoebe Bridgers and Julien Baker for the boygenius project. (TIX)– SH

3/30: Maggie Rogers at The Fillmore

Are there a lot of DelMarVa pop stars, or is it just Maggie Rogers? In either case, she’s captivated our attention between her earworm-y hooks and sharp production, her emotionally tapped-in songwriting, and her charismatic-yet-genuine personality (not to mention that winning smile). She headlined Union Transfer, opened for Mumford and Sons at Wells Fargo, and is ready to bring her forthcoming full-length debut Heard It in a Past Life to The Fillmore this spring. (TIX) – J.V.