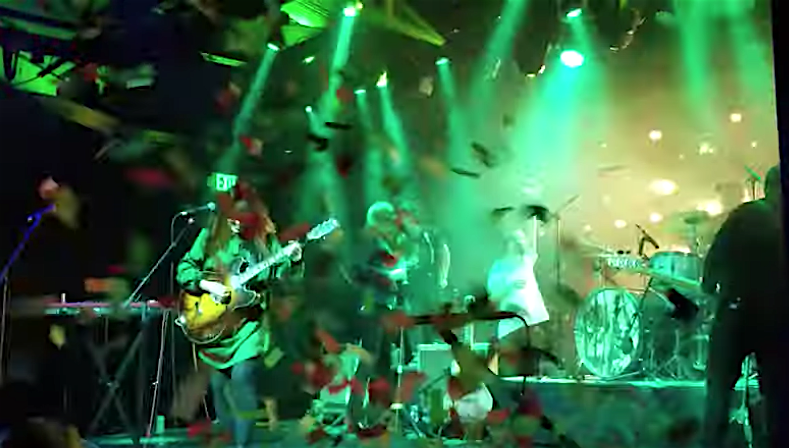 Hop Along at Asbury Lanes | still from video

Concerts that double as New Year’s parties are prime time for awesome cover songs. We’ve already seen Japanese Breakfast’s incredible rendition of “Run Away With Me” by Carly Rae Jepsen at Johnny Brenda’s in Fishtown, as well as Screaming Females’ Nirvana double shot at The Empty Bottle in Chicago.

The latest to add to this batch of YouTube documentation are videos from Hop Along‘s two-night-stand at Asbury Lanes in Asbury Park.On December 30th, the band covered Daniel Johnston’s 1985 song “True Love Will Find You In The End.” While frontwoman Frances Quinlan has played this in her solo sets in the past, here the full band jumps on board, turning it from a yearning ballad to a driving rocker.

For New Year’s Eve, the band was joined by opener Diet Cig after a midnight champagne toast to do their take on Leslie Gore’s 1963 hit “It’s My Party.”

Watch both videos below. Hop Along plays the 2019 edition of the Firefly Music Festival in Dover, Delaware. Tickets and more information can be found here.