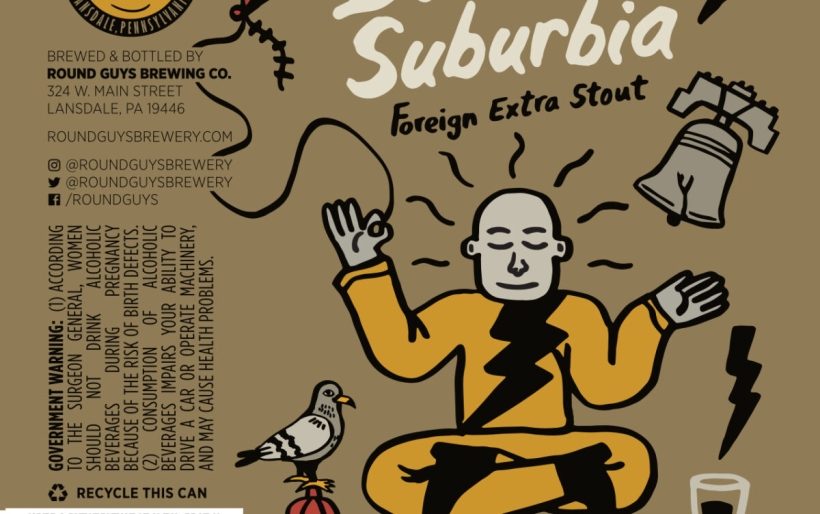 By Sarah Hojsak
January 03, 2019
09:01 AM
Share
Round Guys’ Brewery’s Bowie-themed Buddha of Suburbia can art | illustration by Keith Warren Greiman

Philly Loves Bowie Week is upon us once again. For the past three years, local fans of David Bowie have dedicated the second week in January to a celebration of the iconic artist’s life and work. Two years ago, Philly mayor Jim Kenney even made it official with a special proclamation. The third annual Bowie Week returns this Friday, January 4, and runs through the 13th. There’s a packed schedule of events that includes everything from an art show, to a masquerade ball, to karaoke, all at various locations across the city.

But the suburbs love Bowie too, and this year some folks outside of the city are joining in on the action. Particularly in Lansdale, where local brewery Round Guys Brewing Company has been brewing Bowie-themed beers since the first Bowie Week in 2016.

For the inaugural Bowie week, Round Guys released a saison called Loving the Alien. The second Bowie Week brought two new beers, the Sigma Kids and the Buddha of Suburbia. Those beers will all return this year, and Round Guys is also unveiling two new ones, the Never Grow Old and the Barrel Aged Buddha of Suburbia, bringing this year’s roster to five different Bowie beers.

According to Round Guys Brewing Company’s McGeeney, bridging the gap between music and beer isn’t as much of a stretch as one might think. “Round Guys Brewing Company has always been influenced by music, which actually led us to setting up our own intimate venue space in Lansdale called The Underground. For us, it fits our brand to have beer themed to music,” McGeeney said. It was local Bowie aficionado Patti Brett, the owner of Doobies Bar in Philadelphia, who first approached Round Guys about creating a Bowie-themed beer. “We, of course, said yes, and we made these beers!” said McGeeney. Round Guys partnered with local artists Keith Greiman and Alex Peltz to create the label artwork for each of the Bowie beers.

This isn’t the first time Round Guys has modeled a beer after a musical figure. They have one called Fear of a Brett Planet, which is a play on Public Enemy’s “Fear of a Black Planet,” and there’s also Russian Messenger inspired Rodrigo y Gabriela, and Liquid Swords inspired by Wu-Tang Clan. “At the end of the day, music is who we are at our bones,” said McGeeney.

The full story behind how Bowie beers came to be is featured on the Round Guys in-house podcast, The Original Slacker, which takes listeners behind the scenes of the brewing industry. Across six short episodes, Round Guys founder Scott Rudich talks with Patti Brett about the process of turning the idea into a reality.