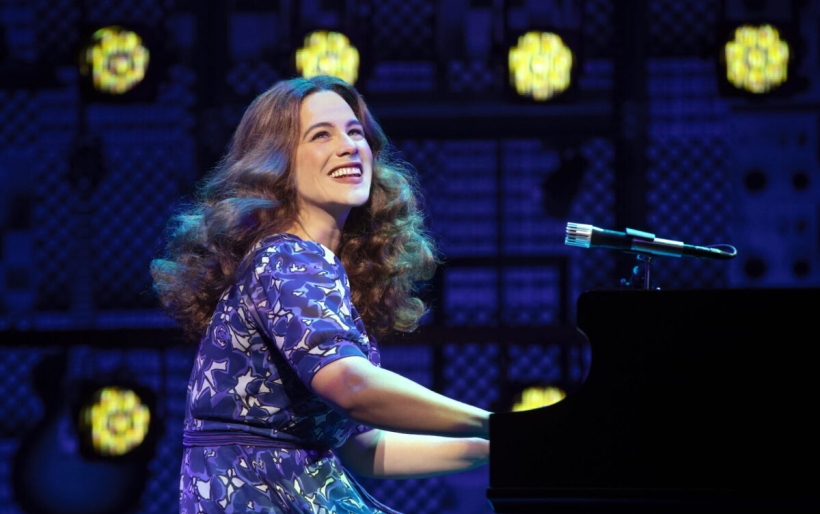 By John Vettese
January 09, 2019
11:01 AM
Share
Sarah Bockel as Carole King in Beautiful | photo by Joan Marcus | courtesy of the Kimmel Center

Look up a list of jukebox musicals, and you’ll notice a ridiculous trend; there were more of them in the first five years of the 21st century than there were in the previous three decades.

Part of that is doubtless due to audience demographics, as one generation’s rabid young pop music fans age into another generation’s nostalgic theater-going retirees. Part of it traces to the blockbuster success of Mamma Mia!, the progenitor of the current wave some 20 years ago. Some productions are equally as successful, others are forgettable. Some try to tie together a popular artist’s catalog to a loose fictional storyline (Movin’ Out and its story of Tony, Brenda and Eddie, plucked from the songs of Billy Joel); others have a built-in narrative already (Green Day’s American Idiot). In particularly rare circumstances, you end up with the person who actually wrote and recorded the songs up there singing them back to you in the throes of a moving two-hour soliloquy — though is it fair to call Springsteen on Broadway a jukebox musical?

Amid all of that is Beautiful: The Carole King Musical, which opened at the Academy of Music last night and runs through January 20th.

Written by Douglas McGrath and on its second U.S. tour after debuting on Broadway in 2013, it takes the approach of a musical biopic (“bio-musical”?), telling the story of King’s rise from a talented and aspirational Brooklyn teen to one of the most successful songwriters of the 60s, to an acclaimed solo artist in the 70s. Throughout the show, music King wrote for The Shirelles and The Drifters is interwoven with contemporaneous pop hits and selections from her iconic Tapestry LP. Song-wise, it succeeds — though it would be exceptionally difficult to screw up when you’re working with such a robust selection of timeless pop music. In other areas, though, Beautiful falls short: the story plays very fast and loose with the facts for the sake of dramatizing King’s life, and tone-wise, it veers towards schmaltz practically from the outset.

Framed around Carole King’s 1971 Carnegie Hall debut, famously recorded for a live album, the production opens on Sara Bockel as King sitting at a grand piano, playing “So Far Away.” Her voice is spot-on, her lilting inflections and husky tone follow the nuances of King’s own delivery — as a singer, Bockel is a perfect embodiment of her subject. And then she opens her mouth for the first line of dialogue, and a massively thick Brooklyn accent breaks the spell, takes you right out of the moment. For sure, King’s actual speaking voice did indeed betray her neighborhood roots, and her personality (based on this 80s Letterman interview anyway) was a bit of the endearing-if-annoying goof that Bockel portrayed her to be. Still, it was hard not to feel like we were watching a cartoonish exaggeration, a Carole King via Gilda Radner performance.

The dialogue from here played like a sitcom foraging for easy gags to set off the laugh track. A flashback finds 16-year-old Carole bickering with her overbearing mom Genie Klein (played with gusto by Suzanne Grodner) who speaks about King’s father in the past tense: “Mom, dad’s not dead, you’re divorced.” “HE’S DEAD TO ME.” Womp womp.

For whatever the corniness of it all, the gags landed spectacularly with the opening night crowd, who laughed on cue to the Jersey-bashing jokes, cheered fervently when King stood up to her habitually unfaithful husband Gerry Goffin (Matt Faucher), and gave various “you go, girl” affirmations when she announced to her boss Don Kirshner (a hysterically deadpan James Clow) that she wanted to be the singer of her latest batch of songs. Which is to say: if you can watch Beautiful without your nose stuck in the air, it’s an obviously fun ride through-and-through. And even if you are, eh, more on the discerning and critical side of things, it still has several winning points. One of those is the depiction of Kirshner’s Aldon Music headquarters, a songwriting factory that sat at 1650 Broadway in late 50s and early 60s, directly across the street from the famed Brill Building. The production’s two-tiered set stacks square recording booths on top of one another, with musicians stationed in each, playing guitars, or recording vocal takes, or slapping an upright bass; meanwhile, other singers, composers, and administrative personae dart back and forth around desks and through office doors, with the dials and knobs of offboard equipment decorating the far wall. It’s a lively fantasy depiction of the frenzy of the mid-century pop music capital, with Kirshner continually prowling the scene, wanting to find which songwriting team was going to give him the next hit. And throughout, those hits show up in flashes: Little Eva (a magnetic Alexis Tidwell) quickly flips from the King-Goffin babysitter to a decked-out star rocking “The Locomotion” with an ensemble; elsewhere, Neil Sedaka (John Michael Dias) pops in from the wings in a shimmering three-piece suit to groove for a verse of “Oh Carol” before disappearing as though a vaudevillian hook was dragging him back offstage.

The majority of act one traces the parallel between the King-Goffin songwriting team and their peers Barry Mann and Cynthia Weil (Jacob Heimer and Alison Whitehurst), engaging them in a constant competition to see who was going to have the next hit, and whose hit was going to be the next to reach number one. While it remains unclear how much this relationship is true to reality, and whether King-Goffin and Mann-Weil had anything in common beyond office space, presenting them as professional adversaries as much as personal friends created a solid dramatic peg to hang the first part of Beautiful. It resonated particularly strongly in showing the existential dilemma of the professional songwriter — being the one to build a song from scratch only to have somebody else’s performance turn it into a global phenomenon, being the one who does the difficult job of creating a hit’s initial form but gets only a small piece of its glory. And this is definitely true of King; I knew her as a singer-songwriter in the 70s soft rock sense before I realized that she was massively behind the scenes of the doo-wop and “girl group” era, and it was only due to her success as a solo artist that I made those connections. But such is the life of a songwriter: even though it is not beset with drugs and rock star excess (Goffin screaming while slamming a brandy glass on an upright piano is about as much as this play flirts with instability), it nevertheless has its own unique emotional struggle. King’s wrestling with this dilemma makes up Beautiful‘s second half, which is where the factual timeline is essentially disregarded. Beginning with her divorce from Goffin, act two traces her bitterness, restlessness, and frustration — tackling these emotions are where Bockel as King is most believable and relatable — and ultimately shows her presenting Kirshner with the songs that would be Tapestry; he links King with his friend Lou Adler to record them upon her move to California. In reality, King was in an unsuccessful band called The City between the Aldon era and Tapestry, and even had an album before Tapestry called Writer that like nobody talks about but is arguably just as great (she worked on it with new Laurel Canyon friends James Taylor and Joni Mitchell). But, you know, for the sake of dramatic expediency, the Beautiful rendition does get King from actual point A to actual point B, even if it skips a bunch of stuff on the way.

But for all its faults, Beautiful presents its audience with a winning song-list, dressed up with ornate flare — The Righteous Brothers belting “You’ve Lost That Lovin’ Feeling” in chic suits and spotlights, Janelle Woods shimmying to “One Fine Day” in a sequin-spangled dress on a faux TV set — and dressed down at the songwriter’s desk — King and Goffin veering very normcore as they workshop “Will You Love Me Tomorrow.” If it were just the songs, this would be an incredible tribute show; and even though Beautiful doesn’t totally successful in adding another layer to its jukebox revue, it transports the viewer moreso than not.

Beautiful: The Carole King Musical runs through January 20th at The Academy of Music; tickets and more information can be found here.