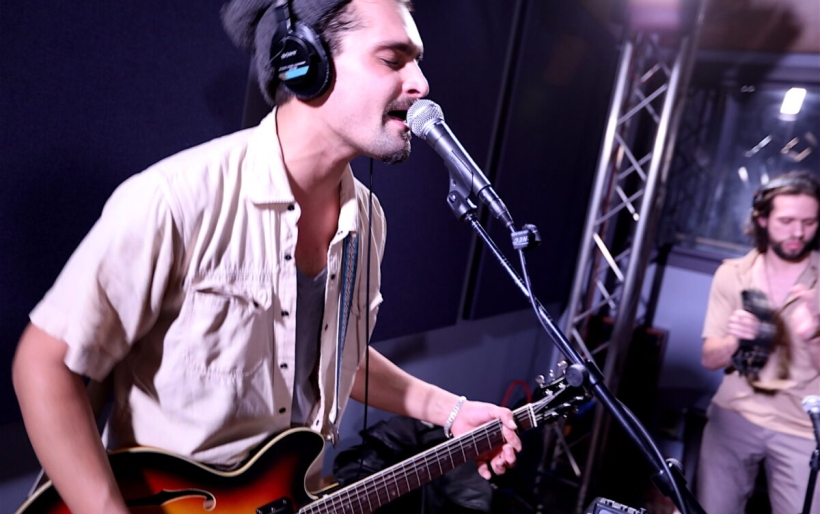 “I kind of get stir crazy if I’m not out playing shows,” says Ali Awan. “I always have to be in a certain project, I love writing and working on stuff.”

In recent years, the Philadelphia psych rock singer-songwriter — WXPN’s Artist to Watch for the month of January — has played lead guitar in a handful of northeast bands, including Philly’s Needle Points and New York’s Jane Church. But his own solo material was always in back-of-mind, and the four songs populating his Bandcamp page, going back to his year-old debut solo release “Citadel Blues,” were all the result of downtime within other projects.

“I was pretty much writing a lot of this stuff as I was in those bands, but I never knew how I wanted to present it,” he says. “Should I get a band together? Is it just a recording project? Playing ‘Citadel’ live was the last thing on my mind, because as much as I love being a frontperson, I also love just playing guitar.”

It’s not a new obsession, either. Awan is 26 now, but he’s been playing music around Philly for more than a decade, going back to when he was a 14-year-old kid who would take the regional rail downtown from Abington to catch punk shows in basement venues with names like Disgraceland and Halfway House.

At the time, Awan was immersed in UK hardcore and anarcho punk from the late 70s and early 80s — bands like Crass, Discharge, and Conflict. “I was really into their lyrics,” he recalls. “I thought I knew about politics, and I was just mad.” As he got older, his listened deepened; he got into the Discharge offshoot Broken Bones, where the guitar work was more intricate, and there was more melody. “And then I started to get into bigger bands that I used to not like,” he says. “The Rolling Stones, The Velvet Underground. As a punk, I thought it was pop, that it was lame. But listening to a band like The Velvet Underground, it reminded me of Crass in a weird way.”

Awan’s first band was called Ballistik — they were fast and loud, with shrieked vocals and wild guitar solos inspired by Japanese hardcore. Even though Awan was 15 at the time, he and his friends were able to get gigs. “Everyone was really welcoming, nobody was like ‘they’re gonna suck ’cause they’re young,'” he says. “In fact, the punk scene at time was opposite, everything was DIY, everything was support support.” Awan reasons that their age also helped in a practical sense as well — they were too young to buy beer, so their practices were less party-driven and more studious, really working to nail their songs. Ballistik impressed their community so much that their song “Third World Genocide” was track one, side one of the scene comp Bloodstains Across Philadelphia.

A few years down the road, he joined the carnivalesque psych troupe Needle Points as a touring guitarist, and connected with Matt Stevenson from Jane Church at one of their gigs. As Needle Points wound down in 2016 with band leader Colin Holloway relocating to the west coast, Awan — not one for long periods of inactivity — hit up Stevenson about playing in Jane Church, a gig that lasted until Awan’s solo output started to take off.

The “Citadel Blues” single was released almost exactly a year ago, and was met with an instantly warm reception not only from his peers in the scene, but from hosts at WXPN, who mixed it into their playlists. Mike Vasilikos gave the song its on-air debut on the New Music Show last March; afternoon drive host Dan Reed quickly began working it into his sets, as did midday host Helen Leicht (who welcomed Awan to her Home For The Holidays lineup) and morning show host Kristen Kurtis, who compared Awan’s songs to Beck’s Mellow Gold. The awesome thing about that, though — different people hear different things in his sound. Awan can be a soulful singer-songwriter, or a stylish retro-rocker, or a devotee of the heady Primal Scream / Stone Roses era of the late 80s, and none of those things is an inaccurate comparison.

As his songs rolled out, Awan knew that he wanted them to sound big — like three guitars and keys big, multiple interlocking lead parts big. “I like to write the songs in layers and figure out who’s going to play those parts when it happens naturally in the room,” he says. “It’s like building a house, but letting the band decorate it.” Right now, he’s got six bandmates backing him up and bringing his recordings (done with Jeff White at Port Richmond Guitar Spa) to life. “I think it goes back to playing in Needle Points, but I just feel like a seven-piece band feels good, it looks good, you know?” Awan says. “It feels like a party, a tribe, a caravan. In my opinon, the more the merrier live.”

Joining Awan in his Key Studio Session this week are Kirby Sybert on guitar and vocals, Daniel Rice on guitar and vocals, and Sean Hur on keyboard — lead players, all. Awan says this is by design: “I’m fascinated with composers like Julian Casablancas who will layer these guitar lines that are simple when you listen individually, but when you listen together sounds like this crazy thing. The classic example is Keith and Ronnie from The Stones weaving in and out. Or the Black Lips, or Nude Party. Less is more if you’re trying to serve the song but still have fun.”

The band is also comprised of bassist John Coyle, drummer Keaton Thandi, and tambourine man Marc Pikulski, and for the most part, these are front-people or lead people in other regional bands. Rice plays in Virginia-to-Philly transplants The Dawn Drapes; he introduced Awan to Sibert, who fronts Kirby and the Vibe Tribe; Hur is very visible as the keyboard player of stoner / thrashers Ruby the Hatchet; Coyle played with Awan in The High Five a few years back, a project he describes as a “New York Dolls worship band.”

“I didn’t realize how many people I knew,” Awan said. “When we had our first practice, it was like damn, what took so long?”

Twelve years in to his presence on the Philly scene, Awan is poised to make a big arrival this year. This weekend he heads into the studio to track a new EP of five as-yet unreleased songs (some of which are getting their debut in this Key Studio Sessions set). He hopes to have that collection out in the world at the end of the month, and take the band on tour this spring, all working towards an LP release at year’s end.

And on the immediate horizon, Awan headlines WXPN’s Free at Noon concert on Friday, January 18th — coincidentally, the one-year anniversary of the “Citadel Blues” release. RSVP for that concert here, and listen to Ali Awan’s Key Studio Session in full below.