Supporting Something Greater Than Ourselves: Lame-O’s rock residency moves into its fourth year at Boot & Saddle
Events

Supporting Something Greater Than Ourselves: Lame-O’s rock residency moves into its fourth year at Boot & Saddle

By Mariah Hall
January 23, 2019
09:01 AM
Share
Wildflowers of America opens up the first show of Lame-O Records’ 2019 Rock Residency | via instagram.com/lameorecords

This year marks local DIY label Lame-O Records’ fourth annual Rock Residency at Boot and Saddle. More than just a showcase of artists on their roster, the series of concerts also gives back to the community: each year, all profits collected from the weekly shows go to Philadelphia charities, benefiting a range of causes, from LGBTQ advocacy to education funding.

“We ask the artists to pick locally because one of the biggest things about Lame-O Records is the community aspect,” says label founder Eric Osman. “So we like to give to organizations who are doing work for the community. We all are a part of this community and want to give back. It all goes to benefit these organizations in the city, no one is really getting paid.”

In addition to a range of music — folk from Shannen Moser, power pop from Mike Bell and The Lame-Os, indie-punk from The Obsessives — the Rock Residency also ventures into the world of stand-up this year. The last show of the month features Benny Feldman, a self-described “one-liner comedian with Tourette’s.” He is the only comedian on the show and the first comedian involved on the residency. Osman explained that his younger brother had gone to college with Feldman: “He showed me his set, and I thought it was really cool and funny and would be a good match. I looked at the Yo La Tengo Hanukkah shows that they’ve been doing for years in New Jersey and now in New York. They always had a diverse lineup of musicians and comedians and I thought of that and reached out to Benny.” 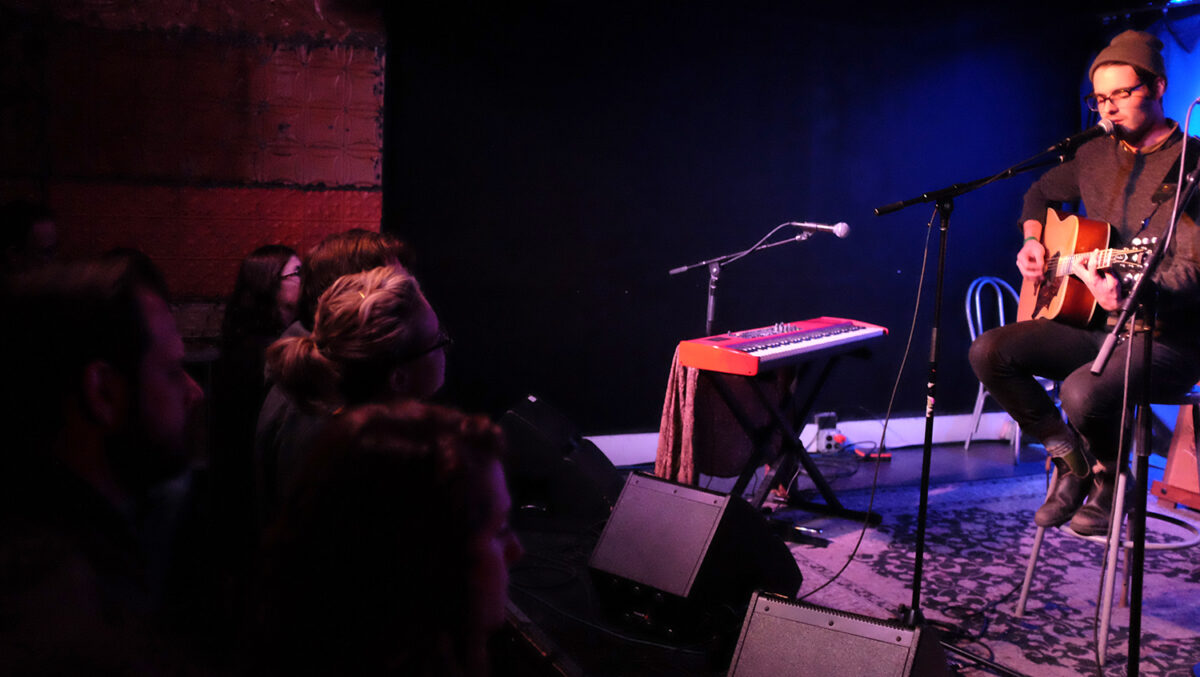 Jake Ewald headlines a show this Thursday as Slaughter Beach, Dog, and picked The Fund as his charity, which benefits The School District of Philadelphia. “It’s a shame that we have all these great universities here, but our public schools don’t give local kids the resources they need to reach those universities,” he said. “So the fund tries to fill in some of those gaps.”

Ewald mentioned that the Rock Residency shows were important to him not just because of the charity aspect but as an opportunity for friends to share music in a communal space, without the pressures of a tour. When asked about his own writing process, Ewald talked about avoiding specific messages. “When I’m making something I have to just let it flow through me. The biggest motivator ends up being that moment when I’m listening back to a song and I feel like I’ve successfully transcribed a feeling. That’s what grabs me in songs by my favorite writers, so it’s really special when I can feel like I’m tapping into something similar.”

The first show of the series kicked off Thursday the 10th at Boot and Saddle, with power pop trio Hurry — four-year vets of the Rock Residency — playing a set alongside Early Animator and Wildflowers of America. Despite the numbing cold, a smokers’ circle was gathered beneath the neon boot-shaped sign of the venue. Apparently “punk time” still applies outside of the basement show world, so there was plenty of time for me to grab a beer and become way too absorbed in reading messages graffitied across the bathroom walls.

Hurry at the Lame-O Rock Residency | photo via instagram.com/lameorecords

Wildflowers Of America opened with an energetic set punctuated with sarcastic quips, lead by Perry Shall dressed in 70’s prom attire. They were followed by Early Animator, the solo project of Spenser Colmbs of Three Man Cannon. He read poetry and journal entries over layered guitar riffs, telling nervous jokes and sipping an old fashioned in between songs. Hurry closed with jams from their latest album, Every Little Thought, their natural humor and chemistry spreading infectious smiles.

Hurry’s Matt Scottoline chose PAWS as the beneficiary of the first gig in the series. “I’m a vegan, and an animal rights guy, so I always want to try and give back to any type of local animal welfare organization when I can,” he said. “Plus I got my beautiful cat at PAWS, so I have a soft spot for their work in particular.”.

The intimate atmosphere seemed to draw everyone slightly closer in that dark back room, and maybe that’s the point of shows like this— to bring strangers together for a moment, to break the walls of isolation we build in our day-to-day lives and support something greater than ourselves.

The Lame-O Records Rock Residency continues on January 24th, 2019, with Slaughter Beach Dog, Shannen Moser, and Cherry; it concludes on January 31st with The Obsessives, Benny Feldman, and Earth Telephone; all shows are at Boot and Saddle, tickets and more information can be found at the XPN Concert Calendar.