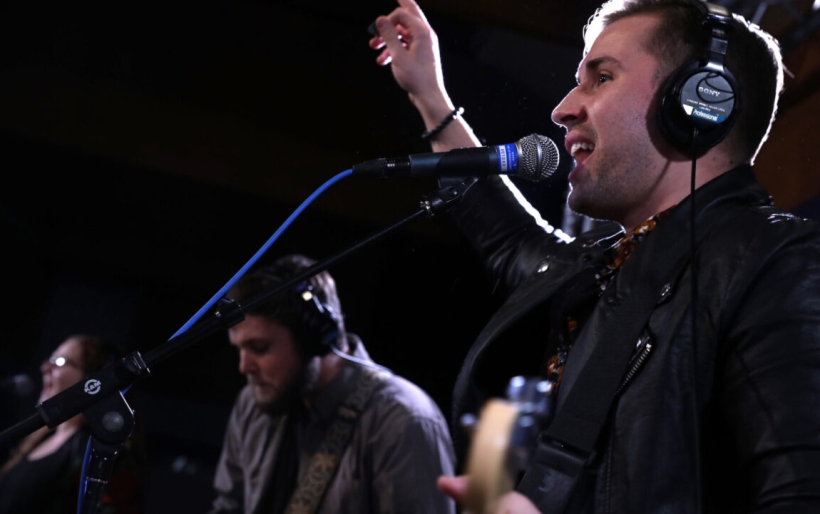 Foxtrot and the Get Down | photo by John Vettese for WXPN

The Key Studio Sessions: Foxtrot and the Get Down

It’s hard to believe, but Philly rock faves Foxtrot and the Get Down are coming up on eight years in the scene. Like any good band active for that amount of time, they’ve grown — and I’m not just talking about going from the duo project of West Chester University friends Colin Budny (guitar and vocals) and Ken Bianco (bass) to the soaring six-piece band that filled WXPN studios this week. I’m also talking about growth sonically and stylistically.

In the beginning, and even a decent way into the mid-period, Foxtrot’s bag was bare-knuckled bluesy modern rock, amped up and aggressive. They’re still a loud band with a big sound, mind you, but today they boast an expanded scope and a dynamic range — something that came first with Erica Ruiz joining the band on keys and vocals in 2014, and then with the 2017 release of Roots Too Deep on Nashville’s American Echo Records, where the band began to incorporate country and folk melodies and arrangements into their poppy rock fold.

They’ve been releasing singles one-by-one in the couple years since then — and playing them for massively engaged crowds ready to dance, as we saw in a high-energy throwdown at Firefly last summer — and the latest batch of songs finds the band diving deep into the American soul stylings of Motown and Stax Records. All that is to say that the Foxtrot and the Get Down that joined us for The Key Studio Sessions is the expansive R&B-minded Foxtrot, fleshed out by saxophone leads from Will Schade and guitar licks from Collin O’Donnell, propelled by percussion from Jimmy Iovine, and not at all shy about flexing their prowess in a near-seven minute cover of Alicia Keys’ “If I Ain’t Got You,” which Ruiz totally slays on the vocal front before letting just about everybody in the room take a solo.

The band’s four-song set leads off with their two most recent singles — the driving, disco-fueled sprinter “Battered and Blue,” and the coolly swinging “Down and Out” — and concludes with “Legends,” a brand new bootstomper that gets its debut here. The song has the crunch of power pop, the cadence of country, and the sentiment of somebody who’s been paging through rock magazines their whole life, with Budny singing about how “at my age all my heroes were gone” and then reflecting on the idea of the legacy you can leave behind when your music connects strongly enough. To hammer that point home, the band launches into a roof-raising chorus with dueling sax/axe harmonies between Schade and O’Donnell, and vocal teamwork between Ruiz and Budny. It rocks, and you can watch it below.

All these songs are leading up to Foxtrot and the Get Down’s eventual next full-length project, but in the meantime, they’re plotting a spring tour around SXSW which kicks off on Friday, March 15th, with a headlining appearance at MilkBoy. Tickets and more information can be found at the XPN Concert Calendar. Listen to the band’s full Key Studio Session below.