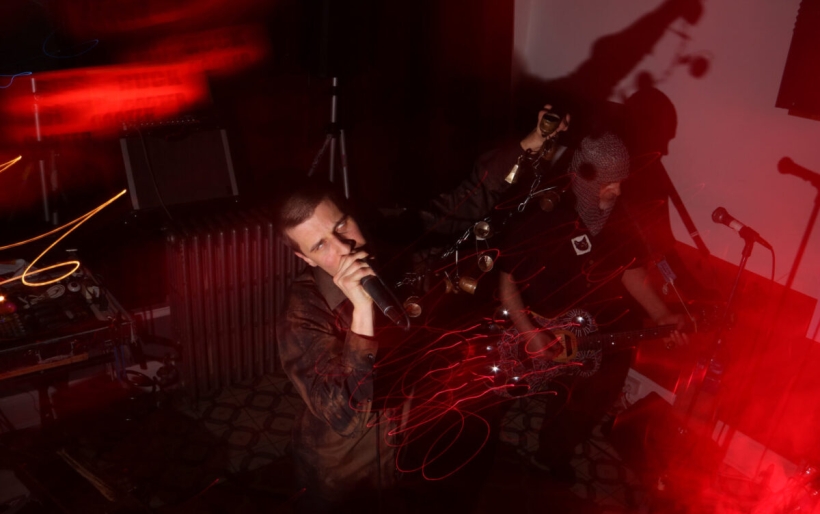 Buck Gooter | photo by Kevin Riley | courtesy of the artist

Very few labels start on purpose. Normally it’s just something that happens, a confluence of circumstances, an accident – but hopefully a happy one. You or your friends are in a band that’s recorded something and you want to put it out but you don’t think any existing label would be interested and so you say, “It’s DIY music so I can just do it myself! And really, why stop with just this release when I can be a resource for others? I mean, how hard can it be?”

The answer, as anyone who’s ever stumbled into running a label, is simple: it’s close to impossible. There are so many pitfalls, so many ways things can go wrong, so many ways to lose lots of money and have little to show for it but a few hundred records tucked away in storage forever. The rewards are equally plentiful, which is why so many people go down that route.

Jake Saunders has been walking that tightrope since being handed the keys to Ramp Local, the label he’s been running for the last couple years. It was started by Trip Warner of Wharf Cat Records in Brooklyn – home to Urochromes, WALL, Flasher, Bush Tetras, and a ton more amazing bands – as “a way for him to release more experimental, obscure stuff” on cassette, according to Saunders. Since taking it over, he’s expanded things to also include vinyl releases, most recently a record for Harrisonburg, VA “industrial blues” two piece Buck Gooter. More on them later.

Saunders explained that he initially met Warner while booking shows in Brooklyn. He was putting together a compilation that included a track from Sediment Club, who Wharf Cat has worked with in the past, and Warner suggested that Ramp Local could release the cassette. They started working together shortly after that tape, called Eclectic Sessions, was put out in October of 2015. According to Saunders, “After a while, I was kind of just getting into it and he said, ‘You can run this shit, man’ and he handed it over to me no questions asked. I think he just had too much going on.”

A year later Saunders moved to Philadelphia, bringing the fledgling label with him. He’s since partnered with David Milstein, who handles a lot of the accounting and manufacturing. The bands on Ramp Local are a mix of locals – both to Philly and NYC – and two acts from more far flung places, Father Murphy from Turin, Italy and the aforementioned Buck Gooter. Appropriately enough, both of those are cult favorites in Philadelphia and have always done very well here.

That’s one of the reasons Saunders feels that this city is, “the perfect home for Ramp Local.” He told The Key that, “The label is the reason I moved to Philly. I knew I’d be able to afford life and also run this label and have a space to store all the shit…It ended up being a really good place for me.”

There’s a lot of different styles of music represented on Ramp Local, from the more minimal electronic stylings of Max Jaffe to the noisy art rock of Palberta to the experimental horn-fueled glitchy pop of Lily and Horn Horse. Asked about how he describes what’s going on, Saunders said that, “I’m trying to let the label’s identity form as I go along. Right now what I’ve been telling people is that we’re a label of jazz musicians making rock music.”

While he might be taking a bit of artistic freedom in that description – while Saunders grew up listening to jazz and is still a huge fan, not everyone on the label comes from a similar background – it is clear that this is a collection of musicians who are not married to one specific genre but rather exist in the margins between them. While some labels might balk at that kind of mix, Ramp Local embraces it.

“A lot of it is trying to balance my identity and my own music tastes with where the label is at,” he explained. “The label is a rock label, it’s a pop label. Right now I’m trying to inject my other more experimental and avant garde tastes into this pop world.”

In March, Saunders will be touring with Buck Gooter to Austin for the annual South By Southwest festival. He told The Key that, “I hope they have fun! I’m nervous. I went last year. There’s a lot of fucking vanilla bands out there and I can’t wait to see how Buck Gooter does. At least they’ll give people a chance to be, like, ‘Oh, this isn’t like the 60 other bands I’ve just heard!’”

While the event has become more industry-driven in recent years, with labels swarming around hoping to scoop up the next big thing, the band will be there just to try and turn some heads and sell some records. Mostly. According to Saunders, “Truth be told, if they found another label that’s bigger than Ramp Local, I would love that. I would be so ecstatic and I would feel like my job has been done if a band can go on from being with me to doing something on a larger scale.”

That approach, as a sort of DIY stepping stone, suits Ramp Local and Saunders. “I think that at the moment it makes zero sense for me to be trying to do anything more than I feasibly can cause then I’m just making promises to artists that I can’t keep,” he said. “Honestly I have no clue if Ramp Local will get any bigger than it is right now.” That’s not a bad thing, he explained. “I am so happy with the way things are going. We’re very fortunate.”

Still, it’s not like he’s trying to unload Buck Gooter on another label anytime soon. Saunders has been a huge fan of the guitar and electronics duo for years and put out their previous album, 2017’s 100 Bells. According to him, “They’re the best band to have on a small label” partially because of their prodigious touring schedule that has them on the road close to half the year.

Although the band has been around since 2005 and is pretty well-known in underground circles, they never really received much hype until last year. Which is to say: while this reporter has been seeing the Goot – as big time fan Henry Rollins refers to them– often since their initial trip to Philly probably back in 2005, their upcoming show at Johnny Brenda’s will be the first time I’ll get to witness their brilliance somewhere other than a weird West Philly basement or the equivalent. That’s not a bad thing; DIY basements and more established spots are equally cool places to see shows. And even though they won’t be sharing a stage with Northern Liberties, who have played almost every Buck Gooter show I’ve seen – and whose bassist Kevin Riley was kind enough to share the picture above that was taken when the band opened for Chicago no wave legends ONO in 2017 – I’m a hundred percent sure that Palberta and David Vassalotti will be perfect on that bill.

Saunders’ excitement about and dedication to the bands on the label is quite palpable. While Ramp Local was originally named by Trip Warner from Wharf Cat – according to Saunders, it’s the name of one of the crews of skaters from the cult classic Thrashin’ – he views it as more of a commandment to, “prop up bands that exist on a local sphere.” During our roughly one hour long conversation, he constantly spoke about putting out albums with bands and not for them, which feels like an important distinction.

It’s clear from talking to him that Saunders has a deep and constantly evolving relationship with music. Ramp Local is very much a reflection of that. While Buck Gooter has been discussed at length, The Key asked Saunders to introduce some of the other bands on the label.

“Max is a percussionist and he is a member of the band JOBS who we just released a cassette with. He is also in Amirtha Kidambi’s Elder Ones, which is this really amazing spiritual free jazz group from New York [ed. note: Elder Ones played at last year’s October Revolution here in Philly hosted by Ars Nova].

He made this record when he was one of the beta testers for Sunhouse Sensory Percussion, which is something you might have seen Greg Fox and Brian Chase, the Yeah Yeah Yeah’s drummer, they all use this stuff. It’s kind of like synth software you can use for your acoustic drums. The sounds change depending on the positioning of your drums and the timbre.

It’s an electronic record and it fuses his influences: jazz music, rock music, and dance music. So that’s kind of the vibe there. It’s really beautiful experimental ambient dance music.”

If there was a Ramp Local house band, it would be Philadelphia/Brooklyn’s Palberta. They’ve put out two albums by the prolific three piece art pop act, including their split with Philly favorites No One and the Somebodies. They’ve also released two Lily and Horn Horse albums, which includes Palberta member Lily Konigsberg, and one by her and Andréa Schiavelli of the band Eyes Of Love. On top of that, they put out stuff for Old Maybe – a band that counted Nina Ryser from Palberta as a member – and a Ryser solo album, 2016’s I Hope All Of Your Dreams Come True.

Saunders: “Palberta has influenced so many bands. When I was on that Buck Gooter tour through Canada I swear on every single show there was a band that sounded exactly like Palberta. That band means a lot to me. They have this sound that’s really fresh but still really raw that we were all really attracted to and still are. They keep developing.”

Saunders used the word “challenging” to refer to Father Murphy, the electronic duo from Turin, Italy who released their final album domestically on Ramp Local in April of last year. That description is quite apt, as the music made by the the band runs the gamut from experimental noise to beautiful ambient waves of sound. A concept album – from a concept band – Rising. A Requiem for Father Murphy. is based around the form of a Catholic requiem, the Mass for the dead. It is in places quite beautiful but ultimately, like Saunders said, it is a challenging listen.

The band ended up on Ramp Local because they were one of the favorites of Saunders’ business partner David Milstein. While such a release might feel a little out of place on the label, Saunders told The Key that, “I like the challenging shit. I think it has to do with the fact that I’m super into jazz but I also went to Bennington College where I’d walk downstairs and there’d be a dude playing a meat grinder with a contact microphone on it in my common room.”

One more local connection: one of Father Murphy’s final shows was in New York City this past November with Philadelphia’s own Moor Mother and the legendary Jarboe from Swans opening. From all accounts it was amazing. Pictures from the show can be found here.