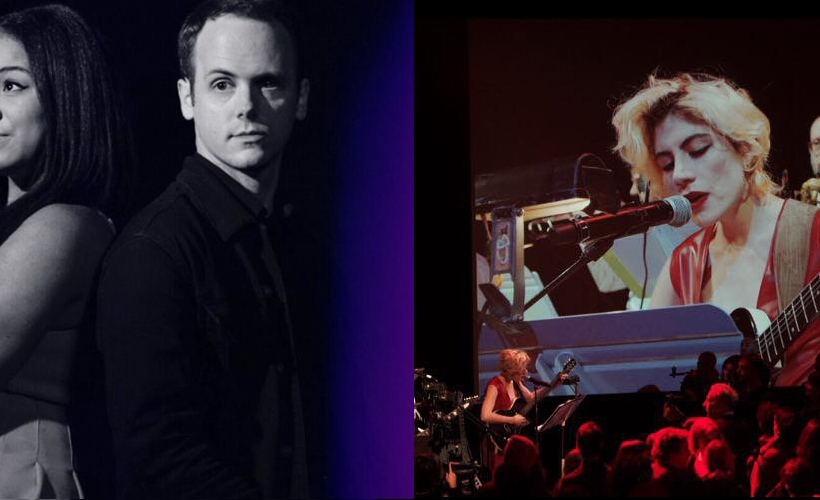 Grandchildren (left) and Lizdelise | photos courtesy of the artists

Listen to Grandchildren’s self-titled, Lizdelise’s Holy Matrimony, and other Philly albums out today

It doesn’t always line up that there are numerous new albums from the Philadelphia region on record release Fridays…but when that happens, we love spending the morning in our headphones and in our feels. Here are four new Philly records released on January 31st: Grandchildren‘s self-titled, Lizdelise‘s Holy Matrimony, Drift‘s Reflection(s) and Sagar Bumsweat‘s Greater Fool Radio.

West Philly art-pop ensemble Grandchildren has been around for a decade at this point, and while they used to be known for elaborate setups onstage — decked out in cables, keyboards, and walls of percussion instruments — as well as densely layered, endlessly captivating arrangements on record, the Aleks Martray-led band has matured into something a bit more lean, focused and personal. This album is the band’s first with vocalist Shari Amanda in the mix; doubling Martray’s vocals in thrilling harmonies at some moments, launching off to her own heights at others, she both seamlessly fits into the band’s ever evolving puzzle while taking it somewhere new and vibrant as Grandchildren’s latest songs explore distance, devotion, and aging.

Guitarist, vocalist and songwriter Elizabeth De Lise is the driving force of the Philly trio that shares her name (albeit scrunched into a single word), but make no mistake: Lizdelise is a BAND first and foremost. For their third release (and first since the trio transformation), Lizdelise explores not only the texture and tone of De Lise’s inventive guitar playing and imaginative storytelling (Holy Matrimony draws on imagery from traditional cishetero relationship-building in its lyrical vignettes, and seems to question the narrative that those traditions are the only way through life) but her endless chemistry with bandmates: drummer Taylor Cullen and multiinstrumentalist Mark Watter, both late of Howlish. Cerebral, yet incredibly inviting.

This expressive five-piece led by vocalist and guitarist Ben Weiss takes its first shot at a full-length creative statement with the new Reflection(s) LP. Loosely affiliated with the soundscapey space rockers Tesselations (with whom Drift shares members, namely lead guitarist Ryan O’Grady and bassist Henry Merker), they try out that expansive, post-emo, swell-to-euphoria arrangement on the opening “Sorry Isn’t,” but Reflection(s) is about not just vibe, but variety. Over its eight tracks, the band proves adept soaring and poppy modern rock (“No Pressure”) and breezy jazzy jams (“The Light”). So does Drift want to be Explosions In The Sky? The Killers? Steely Dan? Even if it does feel a bit lacking in cohesion, any style this band tries on, it wears well.

We already talked a bit more extensively about Sagar Bumsweat’s farewell LP Greater Fool Radio, but to recap for those who missed it earlier: kaleidoscopic beats, observational rhymes, intriguing samples cloaked in mystique, and guest contributions from scene friends of project mastermind Sagar Vasishtha, who is about to leave Philly and head out west.

Are you a Philly artist who is releasing a record in the not-too-distant future? Let us know! Send tips to johnv@xpn.org.