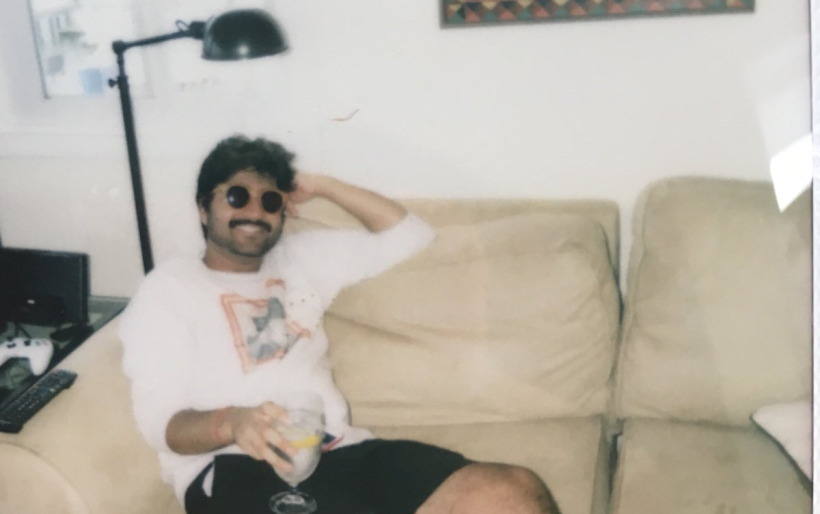 Sagar Vasishtha’s weird and wonderful digital rap tapes first landed on our radar just over a year ago, in a late-2017 edition of the dormant Items Tagged Philadelphia project. Following up on the earlier release PROPERMEDITATION, Vasishtha’s home-recorded hip-hop project Bumsweat released an instrumental EP called BOOGSLOOPS1000, purporting that it was inspired by a legendary series of underground beat tapes that inspired him as a budding producer. Taking in by the mystique and taking him at his word for such, I praised the project’s “totally transportive Theviery Corporation / Faithless / Massive Attack vibrations” while acknowledging the obscure origins of its influence. Turns out the Boog’s Loops tapes were more obscure than I realized: as I learned in this interview, they were Vasishtha’s own projects, released as a teenager learning to navigate the world of DIY production. He’s been at this game for longer than we realized.

So what exactly brings us to this interview? For one thing, Sagar Bumsweat (as the project has gone for its last couple releases) has a new collection of music out today called Greater Fool Radio. It’s another set of dream-like synthesizer tapestries, fierce beats, and matter-of-fact flow that wouldn’t sound out of place alongside Anticon-era Why? or Stones Throw Records luminary Peanut Butter Wolf. But enough with the reference points; the other reason we’re talking to Vasishtha is because after two years and change, he’s closing the book on Sagar Bumsweat as he prepares to leave Philadelphia.

With this auspicious occasion upon us, we decided to swap emails with Vasishtha to learn more about the arc of the Sagar Bumsweat project, and the album — which features guest vocals from Soft Idiot’s Justin Roth (Vasishtha played keys in Soft Idiot), guitar and bass from Mike Space (aka Mike Whalen), and trombone from Will “Big Bill” Wilkinson.

“I put extra care in this album and I feel like it’s my best work to date,” Vasishtha says, calling Greater Fool Radio “a return to form to my debut rap album Blackmarsh, which focused more on my identity as an artist more than anything,” as much as “an accumulation of everything I have learned thus far.” Listen to the record below and read on as we say hello and goodbye to Sagar Bumsweat.

The Key: It feels like you’re closing the book on the project before we really got to know it! So, on beginnings and endings: what motivated you to start the Sagar Bumsweat solo project a couple years back, and why are you deciding to retire it now?

Sagar Vasishtha: Haha, it’s funny you say that when lately all I can think about how many darn rap songs I’ve made in the past few years. As for Sagar Bumsweat’s beginnings, in 2016 I had booked a really sick Philly house show and needed a last act. When I was asking a friend for advice on who to book, they plainly responded “Well, what about you?” I realize the dramatics at play here but I still remember exactly how and where he said it, because it was the first show I ever booked and all I could think was “….I can do that?” Around that time, I was posting super minimal rap songs under my other name, RAGAS. These were stripped back bars over lo-fi beats, just stuff I made for fun that I recorded mostly on my iPhone (but still definitely finished songs). At the time I thought of myself as the best producer in the world, so I was excited to jump into something that felt unfamiliar: performing. I played that show under my usual name BUMSWEAT and it was so rad that I wanted to continue chasing that feeling. Been making raps under Sagar Bumsweat ever since.

I’m retiring the project because Sagar Bumsweat was conceived and cultivated in Philadelphia. Since I’m moving west, it felt right to retire the project where it started. I like stuff with an end.

TK: Can you contrast music-making in a band like Soft Idiot versus the completely solitary pursuit of being a rapper / beatmaker?

SV: For sure, especially because I don’t do too much music-making in Soft Idiot! Justin Roth takes control of that engine in its entirety, but playing keys in his live band has been such an awesome ride over the years. To me, Bumsweat has always been about me in my bedroom making songs for myself and myself only, so feeling even a fraction of a rockstar with his band is such an invigorating feeling. That bein’ said, learning how Justin approaches music has definitely had a palpable affect on my music, especially when it comes to melody. That guy makes you really appreciate a catchy melody.

TK: I love how the one BOOGSLOOPS1000 piece of your output was based on an obscure series of beat tapes you listened to early on in your production days. Given all the beat tapes in all the internet, what about this particular series inspired you?

SV: That was very nice of you guys to write about BOOGSLOOPS1000! Though in actuality, the obscure series of beat tapes that it was based on was really my beat tape series — Boog’s Loops! In high school, I made countless beat tapes, including a series called Boog’s Loops, which were collections of soul and funk samples looped to drums. I would spend my whole day ripping them to CD’s to pass out in school, pleading people to bump ‘em in their cars. I’m pretty sure everyone I gave a CD either threw them out immediately or put em in a drawer and never thought about it again — but I honestly didn’t care, even the possibility of someone playing my songs was sick as hell to me. BOOGSLOOPS1000 was a return to form for me, I wanted to make an instrumental mixtape in the same vein that showed how much I had improved. Making that record reminded me that I still make music for the same reasons I did in high school, that’s a good feeling.

TK: Where previous Sagar Bumsweat releases featured you doing pretty much everything, it’s become more of a collaborative effort; this project features guest vocals from Soft Idiot and Mike Space, as well as more samples than I feel like I’ve heard in the past. What took you down this road of bringing more voices into the mix?

SV: When it comes to the samples, I’ve always loved messing with clips from my favorite shows or remarks from my favorite philosophers. It’s such a direct way to make a song more personal. As for the collaborative aspect of the album, making music is fun, but making music with friends is on another level. That’s how Sagar Bumsweat always operated and I don’t think I would have continued the project if that wasn’t the case. Not just that though, working with people like Mike (Mike Space) elevates my skill to heights I never thought possible for me. With the song we made together on the record, “N.O.W”, Mike approached me with a guitar riff that kinda sounded like a Black Moth Super Rainbow song. We messed around with it and all of a sudden got so hyped on the idea of making a Black Moth song when we realized its potential. Mike sent over guitar, bass, and drums, and I composed the rest, adding additional drums and synths and what not. By the end we straight up had a Black Moth Super Rainbow instrumental, it was so sick. Me and Mike recorded our vocals separately and when we put it together it was such an awesome feeling. If you guys have any connections to that band please let ‘em know me and Mike are aiming for their heads.

Also major shouts out to Will Wilkinson, one of my oldest friends and collaborators, who helped record all my vocals on the record and provided that spectacular trombone!

TK: Do you plan to continue production work, even if it’s not under the Sagar Bumsweat banner?

SV: Absolutely! Sagar Bumsweat takes a lot of production but when I’m making music under Bumsweat I can put out the hardest beats with just my laptop and headphones.

Sagar Bumsweat’s Greater Fool Radio is out now on Bandcamp; if downloads are your thing, grab a download at Bandcamp.