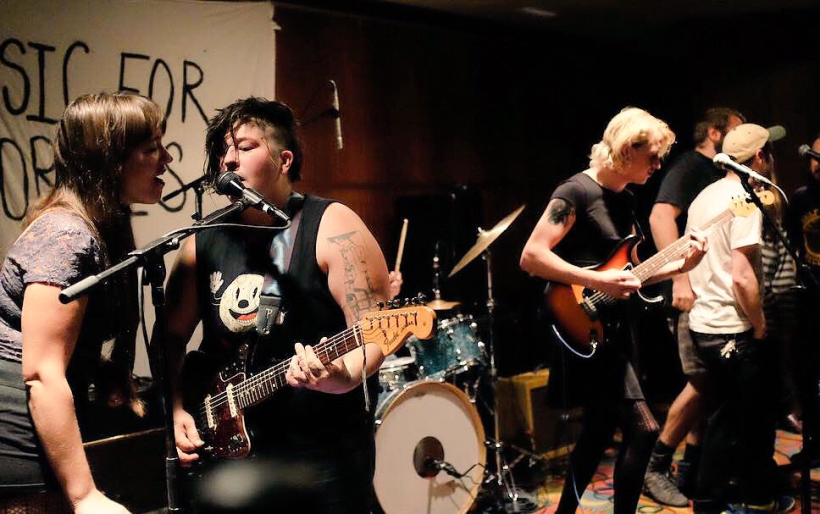 Every day leading up to Valentine’s Day this year, The Key is recapping 14 songs that scream “love” just as strongly as they scream “Philly.” The Essential Love Songs of Philadelphia continues with “South America” from Thin Lips’ 2018 albumChosen Family.

“There’s nothing dense about it,” said singer-guitarist Chrissy Tashjian during Thin Lips‘ 2018 Audiotree session, after the band performed the song “South America.” “It’s just the truth.”

On the one hand, Tashjian is correct — the two-minute, fifty-four-second punk jammer is a barrage of feelings screamed in catharsis from the depths of a West Philly basement. It’s a very literal and direct accounting of emotions felt in the aftermath of love. It’s uncomplicated: a breakup song, pretty much. But it’s not a resentful one, nor is it a self-pitying one. Rather, “South America” is the rare look back at love gone wrong, presented with utter clarity. It’s a breakup song where the person doing the reflecting owns up to their own faults, as well as the flaws in compatibility that combine with those faults to stop a long-running love affair dead in its tracks.

And then, that person’s ex goes to South America. With a woman that they only met last month. WTF.

At gigs, Tashjin says she doesn’t really feel the need to introduce the song — anything that could be said about it is said within the song itself. But it’s in that raw honesty, that vulnerability, that Thin Lips is able to arrive at something profound.

For those who are new to the Philadelphia indie rock trio — or for those who maybe caught them live and dug what they saw but don’t follow them on social media (and perhaps weren’t paying attention in the minute-long introductory title track to their excellent sophomore album Chosen Family) — Thin Lips is a queer rock band. An out and open, loud and proud, queer and allied rock band. In that aforementioned intro track, a voiceover finds Tashjian reflecting on how she first realized her sexuality, how she came to embrace it, and how she sees it today: “Queer, to me, means boundary-pushing, and love, and community, and relationship…and chosen family.”

It’s an inspiring opening, and one that shows how, to Thin Lips, queerness is revolutionary. But the other theme of the album, one that particularly comes to light in “South America,” is that queerness is also an everyday state. It is not and either/or proposition, it does not supersede one’s universally humanistic traits; queer people fall in love, they feel scorn when that love doesn’t work out, they get jealous when their partners move on, they make friends and build relationships, they feel empathy when their friends are hurting. The emotions at the core of all of those things aren’t so different that everyone couldn’t see something of one self in them when they’re spelled out.

Take some of the things Tashjian sings on “South America”: “I loved you but I never said I’d be there every day.” Or “I don’t really blame you if you’re tired of my shit.” Or, my favorite, the closing: “Let’s hear the line / The one that goes, ‘Chris, I’ve never seen you try’ / The line / The one that goes, ‘All I’ve done is try.'” These things probably sound familiar, regardless of your personal identity — sexual, gender, or otherwise. They probably make you think “I’ve been there.”

Thin Lips’ “South America” is, ultimately, a queer love song for everyone; as the Audiotree host succinctly commented, “SO. RELATABLE.” Does that relatability put it in a lesser-than position compared to art that speaks to the very specific concerns of LGBTQ+ persons that cishetero society does not feel or experience, that they cannot relate to and don’t understand, but need to better understand? I’d argue not, primarily because — again — it shouldn’t be either/or, but both/and. Thank the gods for music that takes Get Better Records’ “queer as in ‘fuck you'” approach; for music that bears witness to injustice against marginalized people. But thank the gods, also, for “South America.”

As I was getting ready to write this piece, I read an essay by author and cultural critic Roxanne Gay called When Less Is More, where she talks about representation in popular television, particularly Orange Is The New Black, and a quote stood out.

“I’m tired of feeling like I should be grateful when popular culture deigns  to acknowledge the experiences of people who are not white, middle class or wealthy, and heterosexual,” Gay writes. “I’m tired of the extremes. So few movies and shows fall between those extremes…[and] we need more. We need pop culture that demonstrates not only the ways people are different but also the ways we are very much alike.”

That is something that Thin Lips achieves in a big way — with riffs, and singalong hooks, and energy, and copious amounts of love.