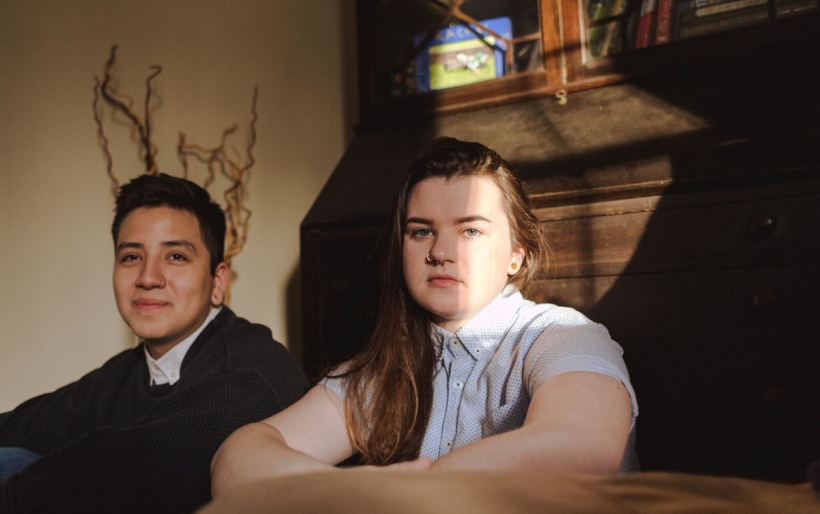 This month, Philly duo Beach Bod returns with a new album, Stress You Out, a collection of songs that pushes the creative boundaries of ambient chill music as we know it. Beach Bod is the brain child of local musicians Rachel Wild and Nathan Avila. The two released their debut EP Carpal Summer in 2016, and dropped a single from this new album, “Little Norma,” in October 2018. On this new album, Wild commands the vocals with a whispered tone, while the two musicians play across all instruments. In its entirety, Stress You Out is a stunning portrait of the complexities of love and loss. Beach Bod strives for an fluid sound that is reminiscent of Courtney Barnett’s EP The Sea of Split Peas and Alvvay’s latest album, Antisocialites, smashed together. It’s laid-back but urgent, relaxed but unsettled. There is something underneath the undulating waves of synth and guitar that weighs on your chest and draws you in to their layered sound.

The opening track, “Tobacco Free Queers”, sets up the mood of the album: calm but complicated. Wild beings the song with: “Be my, be my baby…”, a lyrical nod to The Ronettes that is demure and demanding at once. Wild writes lyrics like this throughout the album, and her frequent use of direct address forms a declarative strength underneath her and Avila’s wispy rhythms. At times, the instrumental presence in “Tobacco Free Queers”, and other songs, take over the vocals. This can be heard especially in “Little Norma” when Wild’s vocals recede behind the guitar’s melody. These waves of sound that ripple throughout the album, contribute to Beach Bod’s #surf aesthetic without being too on-the-nose about it. The point they are making is that life is a messy, complicated thing, and you are not always the protagonist.

While previous songs settled into driving-down-the-highway grooves, “Stress You Out”, the album’s titular track, floats above. Wild and Avila create a dreamy-like sound as Wild breaks your heart with her devastating lyric: “I want you here with me, but I know sometimes I stress you out.” Wild sings as if the words are being pulled from her throat because she knows what she’s saying is true, no matter how much she doesn’t want to admit it. While “Stress You Out” is an aesthetic outlier on the album, it communicates Beach Bod’s central idea: life is unsettling. Important moments, people, relationships rarely fit into a prescribed rhythms, and the only way to capture this truth is through a sound that is as amorphous as the experience itself. Beach Bod succeeds in complicating easy narratives about love and loss by creating an album that explores a vast terrain of how it really, truly feels to be young and vulnerable.

There is so much packed into each song on Stress You Out. Its mirage of a sad song masqueraded as a chill song makes for an intoxicating listen that forces you to zoom in on every musical nuance. The benefit of this album is it gives you something to chew on, something to consider. Beach Bod isn’t interested in easy answers. They want you to interrogate your experiences and search for what is hidden — even if it stresses you out.

Listen to Stress You Out below, and see Beach Bod at Everybody Hits this Friday, February 15th with Oso Oso and Diva Sweetly. They’ll also play February 16th with Hometime, Hot Jam Factory, Black Costanza, and Flailing in Shippensburg, and February 20th with Japanese Breakfast, Sidney Gish and Lunch Ladies at Monmouth University. More information on all these concerts can be found here.