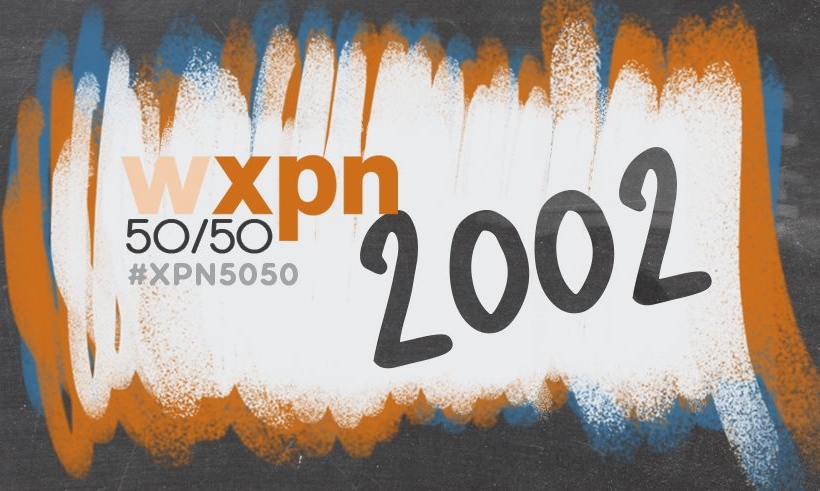 For fifty weeks over the next year, we’re celebrating the music of a specific year every Saturday on WXPN. We’ll be choosing the years randomly; for this week’s #XPN5050, John Vettese is putting the musical spotlight on the year 2002.

The year 2002 was filled not just with amazing songs (and big hits), but albums that were jam-packed with them. The Flaming Lips‘ Yoshimi Battles The Pink Robots, Rilo Kiley‘s The Execution of All Things, The Roots’Phrenology, Damien Rice‘s O and Wilco‘s Yankee Hotel Foxtrot were just some of the standout releases of the year. (To say nothing of equally stacked records from Sleater-Kinney, Interpol, and Common, the debut releases from Ben Kweller, Neko Case, and The Polyphonic Spree, acclaimed records from legacy artists Elvis Costello, Tom Petty, and Patty Griffin).

On the TV set, viewers were mostly tied into the new trend of reality programming — American Idol made its debut in 02, as did The Osbournes and The Bachelor — but story driven productions were still in effect, whether it was cult faves like Firefly or acclaimed shows like The Wire, which many still consider to be one of the best TV shows of all time.

On the big screen, there was a lot of riveting action / adventure: Matt Damon made his debut as Jason Bourne in The Bourne Identity, Tom Cruise starred in Minority Report and Darren Aronofsky directed the post-apocalyptic 28 Days Later. But it was also a good year for drama, with Adam Sandler starring in Punch Drunk Love, Jack Nicholson in About Schmidt and Hugh Grant in About a Boy (which Badly Drawn Boy recorded the soundtrack for). And let’s not forget fantasy franchises, like Harry Potter and of course Lord of The Rings: The Two Towers.

Listen to a Spotify playlist of music from 2002 below.