Jurks are ready for a new beginning in "45" - WXPN 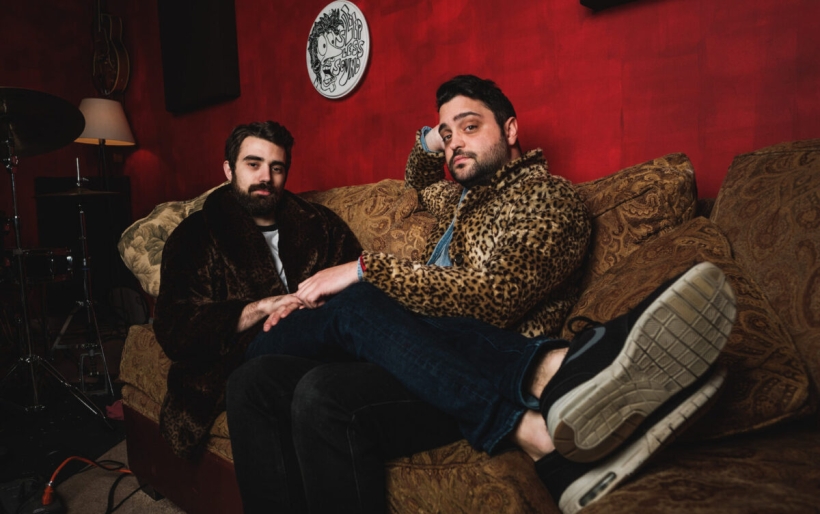 Jurks | photo by Matthew Raspanti | courtesy of the artist

Jurks are ready for a new beginning in “45”

Last year, Philly’s Matthew Jurasek went on his first vacation in ten years. His band Thee Idea Men was on hiatus, he finally had a break from his day job as a jazz publicist, and he and his old bandmate Kris Pirnat decided to travel to Italy, where a café encounter with another American tourist make him stop and take stock of life back in the states.

“This guy was at a table with his wife and daughter,” Jurasek remembers. “And he just wouldn’t let them speak at all. He pooh-poohed [his daughter] a bunch whenever she tried to talk.”

Later on, he sketched out the story into lyrics, reflecting on alpha-male aggression and domineering personas. And as he wrote, he realized that there was more to the encounter than he realized.

The song that resulted, “45,” is the first single from his band Jurks, and it premieres today. Jurasek gradually began writing with a new project in mind after Thee Idea Men took a break from playing and recording. “I had a bunch of material I really didn’t know what to do with,” he says. “Not that the band was ever against those songs, but stylistically they didn’t fit with the concept we were going for.”

That concept was generally more lighthearted stuff, rather than trying to comment on social or political issues. It also was sonically more skewed towards rough-hewn and raw blues-rock, versus the comparatively expansive sound of Jurks.

Jurasek’s day job in jazz expanded his listening palette to include a lot of Nels Cline, Julian Lage, and Bill Frisell. He doesn’t consider himself a jazz player, but he wanted to explore arrangements inspired by those artists – instrumental interludes, longer form pieces.

So when the time came to record, he contacted Luke Kozinski at Germantown’s Sleepless Sound – who he knew from their time at Drexel, as well as sharing show bills with his band NARK – and the two began working in the studio. What began as a solo album turned into something more collaborative, with the garagey roots of Jurasek’s writing belnding with his more expansive ambitions, and a dose of affection for post-emo experimentalists like Thrice.

“It turned into us hanging out a lot at the studio and creating songs from scratch,” says Kozinski. “Creating jams with one microphone set up capturing them. We’d do that for an hour or two and then sit down at the computer picking them apart. ‘Oh, this is the verse, of course.’”

And with ideas inspired by his travels abroad and the state of the world back home, Jurasek had content to pack those verses with.

“For Thee Idea Men, we weren’t trying to make statements,” he says. “With this one, I had more in me, lyric-wise, and I did not have anyone feeling like they had to push that with me too.”

In “45,” Jurasek turned to that café in Italy, and the American who talked down to his family. As Jurasek describes him, he seemed like a business person who went on a lot of international trips by himself, who could have easily had three different lives in three different countries. He seemed like he was embarrassed to have them with him on this particular trip with. He tried to impressively speak Italian to the waiters, but his Italian was awful, and they rolled his eyes. He just reminded Jurasek, in many ways, of President Trump – so as the lyrics flowed, Trumpian references began to work their way in, subtly at first, and later more pronounced.

“I thought about the episode of Saturday Night Live after he got elected, and what Dave Chappelle said,” Jurasek recalled, a reference to the comedian’s controversial quote: “I’m wishing Donald Trump luck. And I’m going to give him a chance. And we the historically disenfranchised demand that he gives us one too.” Chappelle has since said he regrets the statement, and Jurasek is at the same point himself. The behavior he saw in an American man on vacation is bad enough in that context; as a head of state, Jurasek says it’s even worse.

“In the chorus, I say ‘We’ve seen that now, okay?’ We’ve given it a chance. It didn’t work. Can we go back to the way things technically should work?’

“I wasn’t trying to be overtly political,” he continues, “But in today’s day and age, it’s kind of hard not to have an opinion, because if you don’t, then you’re kind of not even alive, right? You’re not paying attention.”

In the first verse, he sings “It takes 45 just to repeat,” and looking at the bigger picture of the United States in 2019, he sees the beginning of the end of a new beginning.

“One of my clients told me ‘With great progress comes great resistance,’ and I took that to heart,” he says. “Whenever you take ten steps forward, somebody wants to take 20 steps back, and then you prevail after that.”

Listen to “45” below. Jurks first EP, That’s Real Cool, will self-release on March 22nd, and the band – which features Kozinski on drums, Pirnat on bass, and Jurasek’s old friend Tim Passarella on guitar and background vocals – makes its debut at Ortliebs on release night. Jurks | photo by Matthew Raspanti | courtesy of the artist