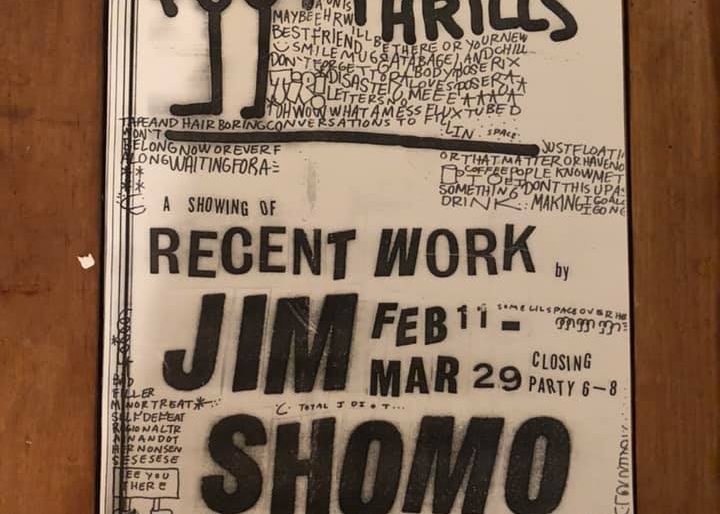 Major announcement time, Philadelphia: it’s finally springtime! Go out into that sunshine and enjoy yourself! Don’t give me that look; I know it doesn’t look like it. I know that technically speaking we have two more weeks until the official start of the season. But it doesn’t matter. I am ready for winter to be over and if you are too – not judging! I was grinning ear-to-ear while riding my bike through the snow just a couple days ago – I have a full calendar of things going on.

Get that started tonight with the sweet stylings of Merge Records rock n roll powerhouse Mike Krol (no relation) with TVO and Wildflowers of America at Boot & Saddle. If you haven’t listened to these bands, you owe it to yourself, even if you’re not able to get to the show. I’m bumping the new Mike Krol album while writing this and it’s putting me in the best mood. TVO is great and if you haven’t seen Perry Shall’s Wildflowers of America yet I really don’t know what your problem is.

That band just announced a show in West Philly in April with Big Eyes and Dark Thoughts and at some point in the near future they’ll finally put out their debut album. If it’s even half as fun and catchy as their live set it’s going to blow everyone’s mind. flyer by Perry Shall

Speaking of mind-blowing, watching Susan Alcorn play pedal steel at a couple of the Encounters at the Mothership shows last month was exactly that. The Baltimore-based Alcorn started her musical career in the country western scene four decades ago and has been playing avant-garde and jazz since the 90s, collaborating with everyone from Pauline Oliveros to Fred Firth to Joe McPhee and Eugene Chadbourne. She’s back in town Friday and performing with fiddler Anna Roberts-Gevalt for a show at the Art Dept Collective up on Berks that Fire Museum Presents is organizing. Opening up will be Kyle Press – you might know him from the bands Impressionist and Love Club – doing an improv sax and vocals performance. Kyle recently completed a solo album and was kind enough to post a track from it to his Bandcamp.

This is just one of many, many awesome jazz and avant-garde shows happening this month. I recognize that I say this every column but it really does blow my mind just how much of a hub Philadelphia has become for this sort of thing. Hell, a piece written by legendary composer John Zorn for Petra Haden – probably most famous in college rock circles for being a founder of 90’s favorite that dog. – is having its Philly premier that same night over at Ruba. Choices, Philadelphia! We have choices! I’m not going to be able to mention everything going on but between this column and the jazz calendar here at The Key we’ve got you covered.

If you like this stuff and you’re not going to see Jandek play at the Ibrahim Theater on Saturday the 9th I really don’t know what to tell you. As far as can’t-miss shows, this is the the big one. The minimalist composer has been at it since 1978 and in that time has put out a massive amount of music. Like, more than a hundred albums. I’m not joking. And unlike other bands with similar output – I’m looking at you, Rolling Stones – everything Jandek has done is at the very least interesting to listen to. Thankfully there are Jandek nerds like People Skills’ Jesse De who put together the equivalent of a best-of or maybe a cheat sheet so you can get a solid education between now and Saturday.

I know everyone is a music journalist these days. There’s probably a joke to be made there but whatever. But here’s the thing about good music journalism: like good music, it’s more than just notes and tones and so on. It’s important to talk about all that stuff but context – which honestly can be anything from musical history to world politics to personal stories – is what elevates an article and makes it fun to read.

Kim Kelly is a journalist who has mastered that over the past decade. Starting off on the metal beat, you can now find her writing about music and radical politics in The Guardian, New York Times, Teen Vogue, and many others. She was at Noisey for the last few years, rising to the position of editor, until a recent ten percent staff cut. But before all that there was Dawn of the Apocalypse, her weekly radio show on WKDU 91.7FM, the Drexel station where yours truly is still a DJ. Kelly is returning to Philadelphia on March 13th to speak about “the current state of media, journalism, labor organizing, and more” at  Wooden Shoe Books on South Street and it’s sure to be a fascinating and fun time.

That Friday you have a very solid choice: go to Johnny Brenda’s to see LA’s original punk rock n’ rollers the Flesh Eaters – original lineup and a very, very good new album – or head to Boot & Saddle for Pinkwash, Yarrow, and Pancho Cuacuil. While the Flesh Eaters are sharing the bill with Porcupine, a band that includes Greg Norton from Hüsker Dü. the Boot & Saddle show is a fundraiser for city council candidate Erika Almirón. What’s it going to be, Philly? Legendary bands or some up-and-coming scorchers getting together for a good cause? Something that might help you make up your mind is that Flesh Eaters is just about sold out. Decisions, decisions!

The following night is just as difficult, what with garage rocker Dan Melchior at Ortlieb’s with Rubber and Honey Radar, a Monthly Fund-organized benefit for Philadelphia Tenant’s Union at Jerry’s on Front, and over at Everybody Hits a doozy of an electronic show with Container, Axine M, Eel Tank, and OOLOI.

Closing out the weekend there’s only one place to be: the Devil Master record release show at PhilaMOCA.  Not only has Devil Master put out the best metal album of the year – and it’s only March! – but they’ve assembled a fantastic lineup for their release with Haldol, Public Acid, The Ire, and Sadist. As I’m sure you know from being loyal Skeleton Key readers, The Ire is one of my favorite new local bands. Their demo tape, which came out a month or so ago, is some absolutely perfect dark post-punk and I’d be lining up outside an hour ahead of time if this was just them and Devil Master. Add in all those other bands and you have yourself an incredible show. That next week is all about rock n’ roll. I mean, more so than usual. On Wednesday go to JB’s for “Philadelphia’s perennial champions of cult rock anonymity” The Tough Shits’ record release / welcome home from South By Southwest show with Joe Jack Talcum from The Dead Milkmen opening up.

Tuareg guitar great Bombino is coming to town on Thursday and playing upstairs at World Cafe Live with Dead Messengers. I know that whole Tuareg rock thing is blowing up these days, what with Bombino, Mdou Moctar and Tinariwen and a ton of others, but also that’s really not a bad thing. These bands offer a fresh look at something everybody thinks they know inside and out and that’s as awesome as it is necessary.

On Saturday at Underground Arts there’s a show put together by us! That’s right, The Key books shows sometimes. This will be the release show for the funky indie band Lizdelise, whose album Holy Matrimony came out last month. Opening up will be Key favorites Strawberry Runners and snake boy gang.

The final show of the week is a special one: YoshimiO from The Boredoms is playing at Johnny Brenda’s in Yunohana Variations, a three piece that includes him and Susie Ibarra on drums and Robert Aiki Aubrey Lowe – AKA Lichens from the math rock band 90 Day Men – on various electronics. The description of the band uses the phrase “ecstatic maximalism” and I think that’s really the best way to look at things. There’s a lot going on here, especially with two percussionists, and I can’t imagine this show will be anything but a delight for the eyes and ears.

March may have come in like a lion but it’s certainly not going out like a lamb. The last few days of the month are jam-packed. On Wednesday the 27th there are two really fantastic jazz/avant-garde shows: at the Kimmel Center is the March concert of the Dan Blacksberg and Yosef Goldman residency and over at the Institute for Contemporary Art is Amirtha Kidambi & Elder Ones, a free jazz synth, bass, drums, and soprano sax quartet out of NYC. The ICA show is part of the Tony Conrad retrospective that is running through August, which makes it even cooler. I don’t think you can go to both but that doesn’t mean that I’m not going to try!

That Thursday Ars Nova is presenting the Mike Baggetta, Stephen Hodges, and Mike Watt trio. You probably recognize that last name but while Watt was in The Minutemen and fIREHOSE there’s so much more than that going on here. The band, led by Baggetta’s electric playing, hangs out somewhere in-between jazz improv and surfy rock n’ roll. Their new album, Wall of Flowers, is coming out this month on Big Ego.

If you haven’t done so already, you should make it a point to stop by Last Drop coffee shop in Center City to see the artwork of Jim Shomo from the bands Dark Thoughts, The Holidays, and a bunch more. While his art has adorned lots and lots of flyers for the past few years, it’s really a treat to see his work all in one place. The closing party will be Friday the 29th but don’t worry it’ll be over in time to get to whatever show you’re going to that evening.

Friday night at Ortlieb’s there might be a bunch of confused 30 somethings at the Spiral Stairs and Hamish Kilgour gig. Stairs was a founding member of Pavement – and started the comparatively underrated Preston School of Industry when that band first broke up in 1999 – but this is no nostalgia-driven cover band. Doris and the Daggers, Stairs’ new one, is fantastically catchy and clever mid-tempo indie rock and I’m really looking forward to seeing the band play those songs live. If you want Pavement covers, go see Stephen Malkmus next month. This will be better, especially since Hamish Kilgour from The Clean is opening! How can you go wrong?

The last day of the month features a ton of great gigs. I will probably be at Alash Ensemble at The Rotunda because Tuvan throat singing is actually amazing and should be witnessed as often as possible. That being said, the newly-formed Great Blue Heron, led by the Arkestra’s Mike Watson on bass clarinet, is playing down at Bartram’s Garden. As per usual, Philadelphia, you can’t go wrong. I’ll see you at the show!