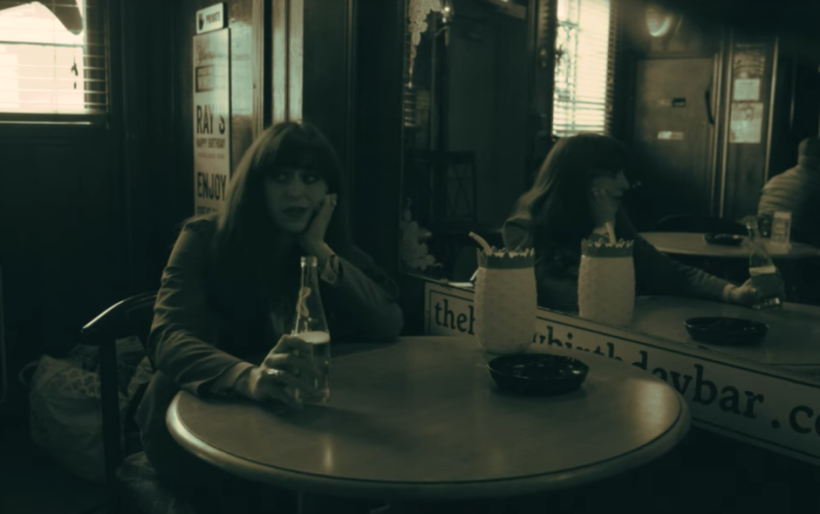 For anyone who has ever had a bad day at work and a worse night at their local bar, Full Bush has a song for you. The local four-piece post-punk band just released their music video for “Ray’s”, a song off Full Bush’s self-titled 2018 album about South Philly’s own Ray’s Happy Birthday Bar. For the uninitiated, Ray’s is a 75 year old dive bar known for its $4 beer and a shot “specials,” Friday Night karaoke, and daily celebrations of patron’s birthdays with free cake flavored vodka and a literal birthday bell. The unique establishment is beloved by locals, like Full Bush, and even attracted the attention of Bon Appétit magazine.  The video for “Ray’s” was directed by Bob Sweeney and speaks to all of us over-worked people who just want a break and drink.

Beginning with simple plucked bass, Full Bush’s lead singer Kate walks into Ray’s, “Had a shitty day at work today / Just wanna drink with my friend Ray.” She looks miserable in a fashionable yet stifling pant suit as she sits down at a wobbly corner table. She sips a beer and threaten a creepy dude near by, “Don’t make me you hit you with that big birthday bell.” The video is washed in a sad sepia tone as patron’s drink and smoke alone, possibly contemplating their terrible day jobs or itchy blazers.

What could’ve been a feminist-punk take on Piano Man takes a vibrant turn for the better at the 2:30 mark. Kate flops forward on the table, and a chorus behind her chants a truth universally acknowledged by anyone alone at a bar at 1:30am: “I just wanna get fucked up!” The scene switches from sepia tone to full color as Kate and her bandmates party down the street. Kate swaps her suit for leather buckle pants and soon she is dancing and singing on top of a table at Ray’s while the crowd gathers around her. “Ray’s” chorus takes on a new, joyful meaning. Suddenly a “shitty night” becomes unforgettable (unless you had too many Ray’s specials, in which case you may have some foggy memories the next morning).

With this video, Full Bush proves that feminist punk is alive, tipsy, and well in 2019. Their sound embodies the ragged-edged guitar rhythms, slamming high hat, and pounding bass of all great punk acts while staying true to their gender-inclusive mission. If you’re with Full Bush, everyone is welcome to get fucked up and dance.

Catch Full Bush at The Tusk on April 11 at 8pm or at Ortlieb’s at 8pm on April 26; details at the band’s recently-announced spring tour dates. Check out the video for “Ray’s” below.