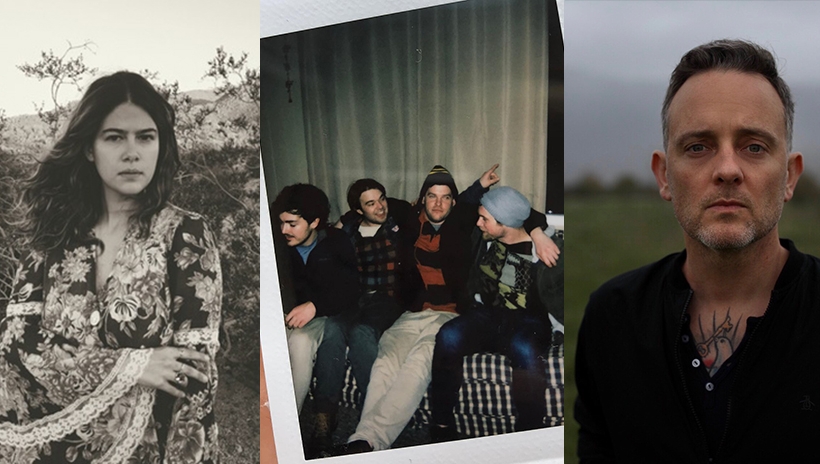 There’s always amazing music coming out of Philadelphia. But when the stars align and numerous releases we’re excited about drop in a single day, well, we tell you about it.

Local rock and roll fans have a lot to be excited about today, from the high profile of Dave Hause all the way to upstart scale of Manauynk faves The Tisburys. (But knowing Hause’s affinity for the Ridge Avenue river wards, how sick would a double bill of those two be? Sure, he’s got a gig tonight in Chicago. That’s not till late. Hop on over for an afternoon doubleheader at Main Street Music, Dave!) Then again, you’ll also find mind-bendy psych, dreamscapey folk, and upbeat indie punk in the mix today from the Philly music community. Read and listen on.

Nomadic folk duo Native Harrow has once again settled in rural Southeastern Pennsylvania after what seems like a constant amount of time on the road behind 2017’s elegant double album Sorores. While that record was a heady dose of liquid melody from a hazy dream-world, the band’s new Happier Now feels much more in the here, in the now…sort of. Sure, points of reference include mid-70s Joni (“How Do You Do Things”), the gospel-leaning side of The Band (“Something You Have”), and the most upbeat Fairport Convention moments (“Can’t Go on Like This”), but their music is not frozen in the distant past by any means. Frontperson Devin Tuel has a soul-filled voice and a perspective that considers the world surrounding her through the lens of what came before and led us to this point — whether it be her childhood informing her adult emotional state, or the music of another generation rippling into her own. Native Harrow plays World Cafe Live on May 25th, details at the XPN Concert Calendar.

Some full disclosure is necessary before we get to the next selection, since Philly rockers The Tisburys feature not one but two Key-affiliated players: singer-guitarist Tyler Asay is a contributing writer for us, and bassist Doug Keller is a former intern. So indeed, mad bias is at play here, and make of it what you will when I say this: Wax Nostalgic is a great, great set of songs. The production and playing is massively stepped up from the rowdy Replacements-fueled garage rock I’ve heard by this band in the past; elegant touches of keys pop in and out throughout the set, giving Wax Nostalgic a tasty Hold Steady / Josh Ritter vibe, and when Connor Fleming busts out a sax on “Rattle,” the whole thing gets a massive lift. On top of the sound, Asay’s lyrics are remarkably on point here, especially in the romantic devotion of “Portraits” — who knew that “you make me want to go back to bed” could be such a sweet line? — and the frenzied, and somewhat funny closer “Gin in my Coffee,” where fights and self-medication come alive in vivid imagery. The Tisburys play Record Store Day at Main Street Music, details at Facebook.

He might call California home these days, but Dave Hause is always going to be a local artist to the XPN world — and even though his last full length declared Bury Me in Philly, his new Kick is the best work this punk rocker turned singer-songwriter has given us in six years. Settling down (but not really, since he’s almost always playing shows) and starting a family has turned Hause’s perspective once again to the world at large, and the way we can navigate its difficulties (the blazing rocker “The Ditch”) while also celebrating its moments of beauty (the nostalgic “Fireflies”). Like I said up top, Hause is in Chi-town tonight, and on the road for the foreseeable future, but we’re looking forward to seeing him again at the XPoNential Music Festival this summer.

Last seen in the #AmplifyPhilly mix at SXSW, indie pop four-piece Sweet Pill makes its debut with Lost In It, a high-energy set of emo-tinged riffs and raucous rhythms that would feel right at home on the lineup of the best basement show in South Philly. Over five songs of complex, yet accessible arrangements, we hear musings on mental illness, anxiety, and family from songwriter and vocalist Zayna Youssef. For fans of Rainer Maria, Slingshot Dakota, and getting in your feelings.

I had the privilege of writing about the expansive double-record from Chris Forsyth for NPR Music’s First Listen series recently, and though it’s a lot to take in — nearly 75 minutes of shredding and soundscaping — it never once loses its grip on the listener. Dabbling in styles that evoke cinematic soundtracks, rustic roots burners, Euro-experimentalism, and cosmic psychedelia, All Time Present is culmination of the long-running Philly guitarist’s decades of instrumental mastery. And though some of the songs do hit intimidating run times, not a second feels wasted — when Forsyth goes long here, you know he means it. Chris Forsyth celebrates the release of All Time Present at Jerry’s on Front on April 27th and April 28th.

Philly’s James Cuartero puts out so much music under the banner of That Dream Was Our Life, I am admittedly unable to keep up with it all. So diving into the current set, Desire Paths, was a refreshing revisit of one of the most productive people in Philly music, who I believe has released numerous EPs and albums per year since The Key’s early days. Back then, he was very much in a lo-fi Elliott Smith zone — the new set finds his sound more robust and ambitious, inspired by the Ex:Re project of Daughter’s Elena Tonra but also evoking The National’s Fake Empire album. Turn the lights down low and listen.