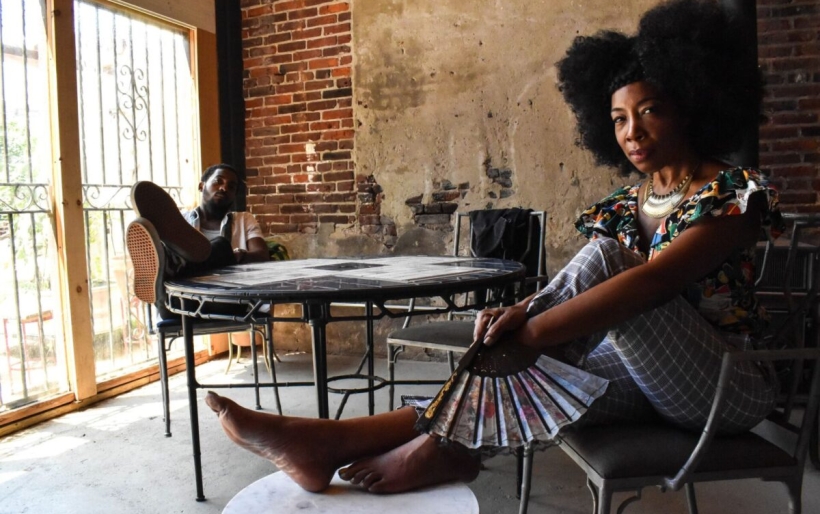 &More | photo by Dejanaya Spicer | courtesy of the artist

Two members of Philly hip hop royalty such as songstress Donn T and rapper Chill Moody would usually be found headlining their own shows and making their own records. Yet, for 2018 and 2019 — and beyond, in accordance with their wishes in this interview — the regal twosome will be known as  &More. The pair’s poignant, passionate debut is Ethel Bobcat, and that release’s celebration / live reveal is April 26 at Johnny Brenda’s.

The Key: &More sounds pretty planned out. When did you two meet, like 2016?

Donn T: The very end of 2016, at a holiday party. We bumped into each other, expressed mutual fandom, and said we should work on something together. People do that all the time, but, for some reason it stuck, and we found ourselves weeks later in the studio. Prior to that, however, I was part of a writing project for SourceBooks – Behind the Song – as a contributing writer. The book came out and they wanted a companion piece. That was the song “Clear,” the first track that Chill and I connected on. We knew that there was musical chemistry from that. The idea of being a band to each other stemmed from that.

TK: Both of you have performed numerous collaborations in the past, but never thought ‘het, let’s make a band.’ Why now? Maybe because it happened a la trial by fire?

CM: Working together. Creating a song. “Clear” is one of my favorite songs – period. Even if I wasn’t on it or she wasn’t on it. If I was able to create something that I like THAT much with one other person, I want to create more of this. Things have been going super-fast, but that’s how I pictured that would happen as their first cut came together quickly and seamlessly. Maybe the rest of it would follow suit even more so.

DT: We’re kindred in a way where we can complete each other’s sentences. There’s a tie there, that’s so intense in the music, and different from other collaborations I’ve been through, where here I’d start a sentence or musical phrase and leave off words and ideas, and he the same, and Chill and I would go back and forth, finishing or starting.

TK: You liked each other’s work. What specifically did you dig specifically? How did what one do vibe with the other?

DT: I’ll start, Chill’s approach to art is something I resonate with. Music is the result for him. Building the community and fortifying and inspiring people — this desire to really change communities is his heart, however. Musically I like his wit. He leads with that as an MC.

CM: Donn’s tone is warm and welcoming, Even when she’s talking. That carries into her music. That vibe. I can’t accomplish that on my own, but it’s a direction that I want to take, and create in that zone. My go-to music as a listener is more avant-garde and melancholy, powerful and ominous and wraps around you. It’s uncommon for a rapper to make that sort-of music. That’s what drew me to her — the sound I loved and heard in my head.

TK: How do you feel as if what you do in the studio translate to a live gig?

CM: Some of the stuff that we created over the phone or over the internet — and not in the studio together — benefits from being on stage. It’s new having us express those songs in a live setting, so it’s fresh every time.  It’s more syncopated.

DT: I know we’re dynamic on stage. There’s a spark that goes beyond the containment of the studio. It’s unleashed, live. We’ve mastered that. It feels combustible.

TK: Can you both take a crack at explaining what or who an Ethel Bobcat is?

CM: You want this?

CM: OK, Ethel Bobcat represents a figure in most neighborhoods we had growing up. That lady who was a matriarch, who knew everybody’s name, knew their business. You could go to her for advice, You would have to get her groceries. She was the neighborhood stoop mother. You sat there, and lived there, and just hung out to hear her give guidance and be a beacon of hope. We felt that in this day and age — maybe the cause of it all is the lack of Ethel Bobcats in the neighborhoods now. In music too. We’re not having enough music with messages. We lost our way a little bit. The album is a synopsis of the world that’s going on right now form an Ethel Bobcat, telling a bunch of stories — from war to love, and everything in between.

CM: Yes, rather than a specific call to action about what’s going on. It’s about talking things out.

DT: She’s the matriarch, and the savior. Politically, we’re coming up from a moment where a lot of us thought we had arrived. Society. We had some good things happen on the political landscape. We felt good about those things and now there’s been a shift into chaos. There’s a sense that there was somebody out there for us. That we were going from a positive space to a negative.

DT: The reality that some of us are facing is that there is not one person to help us feel saved, or safe. What it’s going to take is for each of us, as individuals, to be that savior — that Ethel Bobcat — to each other.

TK: Would you say that “4ever 1st Lady” is attempting to portray that shining moment?

DT: Yes, but it is more layered than that. Conflicted. See it live, and it is an acknowledgment of what we were told we had to do. The way Chill approaches it, and our whole dynamic, there’s a high. And he goes to a very human place. And me as well, not getting on a soap box. But making a stand.

CM: Definitely not a soap box. More like a place where we can say ‘Now what?” and figure out that next step together.

TK: Are the two of you looking to more beyond Johnny Brenda’s?

CM: We have 60-some dates on the calendar so far.

DT: After the headline tour, we’re connecting with St Paul and Broken Bones. We’ve got the Roots Picnic. We’ll be everywhere.

TK: So is this like how Killer Mike and El-P formed Run the Jewels for one album, and now, all they do is RTJ projects and tours, successfully for listeners and the artists?

CM: To make something at big as RTJ or Gnarls Barkley, that’s a goal. For sure. Lucy Pearl too.

DT: Why I connected with Chill was his music and his outreach. We’re looking to impact the landscape — could be music, performance, film. I think we have a vision together.

&More celebrates its album Ethel Bobcat at Johnny Brenda’s on Friday, April 26th. Tickets and more information on the show can be found at the XPN Concert Calendar.