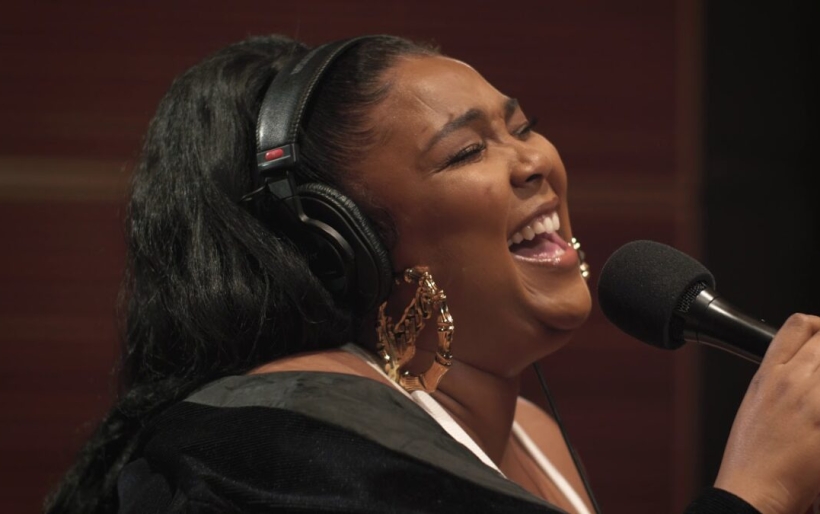 Lizzo at The Current | still from video

Before rapper / singer / force of nature Lizzo heads out to conquer the world on tour in support of her new record Cuz I Love You, she took some time to catch up with her hometown public radio station in the Twin Cities.

“This is my home away from home, I feel very familiar and safe here,” Lizzo tells hosts Sean McPherson and Sanni Brown in this new interview and acoustic session filmed for The Current; she even recites from the top of her head very specific directions for driving to Minnesota Public Radio’s St. Paul offices.

As the interview unfolds, McPherson asks her about building her global audience as well as creating community. Lizzo dates that to her time in Chanhassen, working on Prince’s Plectrumelectrum album where she collaborated on the song “BoyTrouble”; she says everybody working at Paisley Park were given specific instructions to be positive and self-loving. “I never really thought about being conscious of that in my music before,” she reflects. “I wanted to make the fastest rap or the coolest song or whatever I was feeling in that moment.”

Accompanied by acoustic guitarist Walter Williams, Lizzo first plays an acoustic version of the title track to Cuz I Love You, and recounts the story of working with modern rock band X Ambassadors on it, where a casual conversation about romantic trials turned into a song in ten minutes. Lizzo talks about embracing that unpredictability, as well as the pop format; as McPherson notes, when she landed on the Minneapolis scene as a rapper, she used to spit verses 48 bars strong, whereas her wider-reaching songs bring the rhymes down to 16 bars, to eight bars and even fewer. “If my music is going to have a message, I need to make sure my message is concise,” Lizzo reasons.

Williams and Lizzo also perform an acoustic version of the mega-hit “Juice,” and Brown asks Lizzo to reflect on how she’s changed in a decade making music in the Twin Cities. “I was venting on beats,” Lizzo says of her younger, angrier self. “I’m always kind of narrating my journey. It’s just now the space I’m in, people are more in tuned to it.”

Watch the interview and performances below. Lizzo plays a super sold-out TLA show on Friday, May 18th, but fear not — if you missed out on getting tickets, she’ll be back in Philly this fall for a September 18th show at The Met Philly. Tickets and more information can be found at the XPN Concert Calendar.