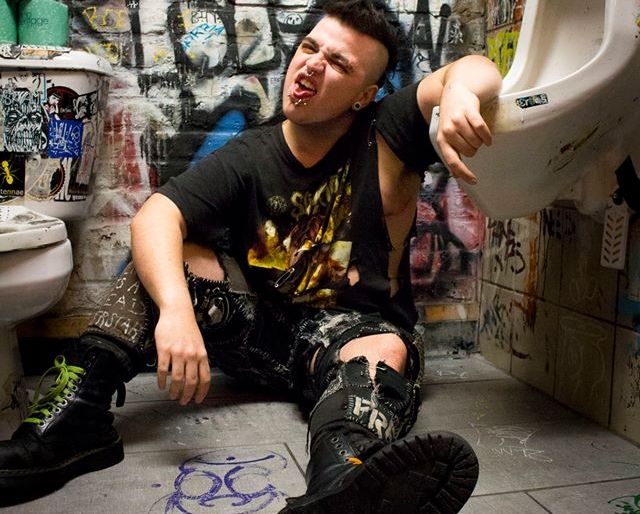 Turn Up The Trans*mission: Tattooed Mom provides an open stage for trans and non-binary artists

It’s February. I’m sitting on a lawn chair in the graffitied back room of Tattooed Mom. The room is crowded, people intermingling on sagging couches and in the backseats of bumper cars. The drag queen known as Little Piece steals French fries from the basket in my lap, flipping the curls of their pink wig. There is no stage, no barrier between the performance and the audience. High-heeled queens strut a narrow walkway, lip-syncing and collecting dollar bills. In one burlesque number, a performer throws peanut butter and jelly sandwiches into the sea of outstretched hands. This is what performance art is, at its core—  unpredictable, unrestricted, and sometimes hilarious.

Turn Up the Trans*mission is unlike any performance art show in Philadelphia. Staged monthly at the long-established South Street punk hangout, it aims to combine trans* advocacy with live performance. The acts include burlesque, drag, singing, spoken word, and any other imaginable performance style. The show serves as a platform primarily for transgender and non-binary artists, and is inclusive of both new and veteran performers. I sat down with host and producer deadb0y IX, as well as a couple of the local performers, in the basement of a coffee shop in the Gayborhood to talk about the mission and future of the show.

deadboy started performing three years ago, and noticed pretty quickly that there were limited opportunities for trans or queer-specific artists. New performers find themselves jumping through hoops, barred from shows that require pre-requisites such as having several years of experience or the right network of connections. deadboy was given the opportunity to develop his own show through Philly LGBT Art Initiative, teaming up with co-host Vyvyan Sassafrass. “We wanted to put on a show that was advocacy and performance art, and to get rid of the gatekeeping rituals,” says deadboy. “I don’t really understand the whole, pay your dues and work for free until you get recognition thing.”

Pittsburgh-based drag performer Moonbaby articulated the overall frustrations of being exploited and undervalued, particularly by certain show producers and bar venues. “What upsets me is to see a bar charging a cover to get in and not sharing that profit with the show. Not only are we getting people in that space, but we’re also driving sales. Queer people have created and sustained culture ad nauseum for years, but we are not sustained by that culture.” Moonbaby’s own show, Alt Slut 69, takes place in DIY venues as well, so that they have full control and can provide enough compensation for the performers.

TUT is an entirely donation-based show and no one is turned away for lack of funds. Free entry is meant to make the show accessible, with all donations going back into funding the show and paying the performers. There is no requirement or set of rules to be involved, and although the show is promoted as a trans / non-binary showcase, cisgender and non-LGBTQ people are welcome to attend, providing they respect the environment. “People will come up to me after the show and say, this is the most trans people I’ve ever been around at once,” deadboy says. “For a lot of people, if they’re cisgender, it’s the first time they’re a minority… If I didn’t start doing performance art I would be in a very dark place. The best thing for my health was to get involved with other people making art and to meet people like me.”

Tattooed Mom is a unique venue for this type of show. It feels intimate and DIY, and the intention was to create a space separate from the preexisting Philly nightlife scene. Moonbaby explained, “The Gayborhood is a space coded for a certain clientele. Having it at Tattooed Mom feels very comfortable.” The artists have more freedom and agency over what they choose to include in their performance by occupying a DIY space. There is less of a focus on appealing to the audience in order to make a certain amount of money. “Sometimes when I do drag it feels like work,” says Moonbaby. “But this is a show that feels more celebratory.”

Another issue is the transphobia and exclusivity of Gayborhood bars. “There’s a push from developers to call the Gayborhood Mid-Town Village,” deadboy commented. “It’s becoming very assimilative. I did not feel welcome in the Gayborhood as an out trans person.” In an attempt to combat this, he is attempting to put together an all-ages or sober show. This would allow performers under 21 to get some experience, and eliminate the pressure of drinking. It would also provide a safe space for young people to meet friends and congregate.

When it comes to booking, TUT aims to book inclusively, rather than for diversity. The issue of tokenizing is prominent in the performance industry on a widespread level. The desire for more representative shows created a need for TUT. “Don’t book people who are convenient, book people that are hard to get a hold of, who maybe don’t even have an ID yet. Getting an ID as a trans person can be a nightmare. That’s not gatekeeping from producers or performance spaces, but as a society, on an institutional level,” said deadboy.

Musician Francis Winter described an instance when they were booked for a show and immediately felt tokenized upon arriving at the venue and meeting the producer: “Apparently they’d never heard anything I’d done before, they just knew I was black. And they were like, oh you do some kind of hip hop or something, right? I’m not a just a checkmark on your list.”

If you attend a TUT showcase, there is a no-photo policy, and any phones out may be confiscated by the host. Francis explained that phones can distract the performers, especially if flash is used. By removing phones, the audience is forced to be engaged and present. deadboy added that as a performance artist, he advocates for anti-commodification, meaning that if your performance is not videotaped or photographed, it can not be bought, sold or taken out of context. “We wanted to create a space where people could be free to perform however they wanted, and not fear having their vulnerabilities exploited.” This also provides protection for the audience members from receiving transphobic attacks via social media. Other rules of etiquette include not touching the performers, and tipping respectfully is encouraged.

Wyatt Flynn is one of the performers debuting at the next upcoming showcase. Flynn has a background in musical theater and runs The Hum’n’bards, a theater company that does experimental, original musicals. Working on musicals is how Flynn got his start writing music and recently released his debut EP Moving Day. Aside from gigging around Philly, The Hum’n’bards will put on a show called Fear Itself for the Philadelphia Fringe Festival this September. As described by Flynn, the show is an immersive exploration of fear. “It’s going to be marketed as a haunted house, but it’s our actual fears,” he says. “No one’s going to jump out and say boo, we’ll be talking about, like, our fear of intimacy.” 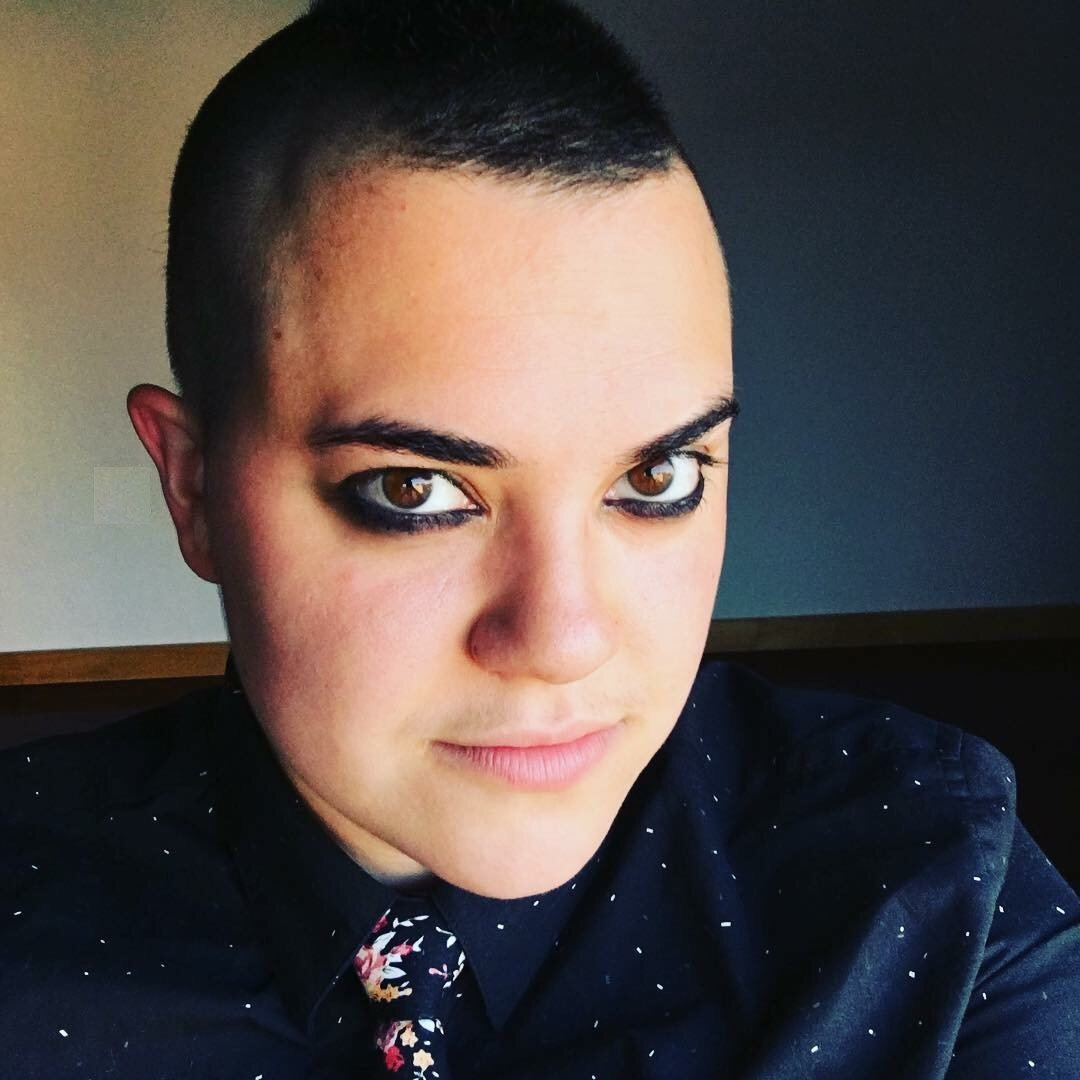 Francis Winter has a full-length album in the works, and has released an EP under the name Overwinter. Their voice is entrancing, weaving over a dark, ghostly click track, a few songs infused with jazz or orchestral elements. “In terms of my persona, I magnify a part of my personality, kind of a sad boy, overly sensitive. I do a lot of alternative and trip-hop,” they commented.

“Speaking to how your identity influences your performance, it’s you but amplified,” said deadboy. For them, performance art was a way to experiment with their public self. “It became a practice area for survival. I get labeled as a ‘shock artist’ for some of the things that I do. I don’t want it to be that I’m shocking as a performer because I’m trans, I want to circumvent that. It’s not who or what I am, it’s what I’m doing.”

Moonbaby described their persona as a “weird wet alien,” and has released music under that name. For them drag is a form of coping with insecurities and having autonomy over how they present to the world, even if that presentation is estranged from reality.

Turn Up the Transmission is hosting their two-year anniversary showcase at Tattooed Mom on May 23rd. Find more information here.

Turn Up The Transmission | flyer by c.dub design