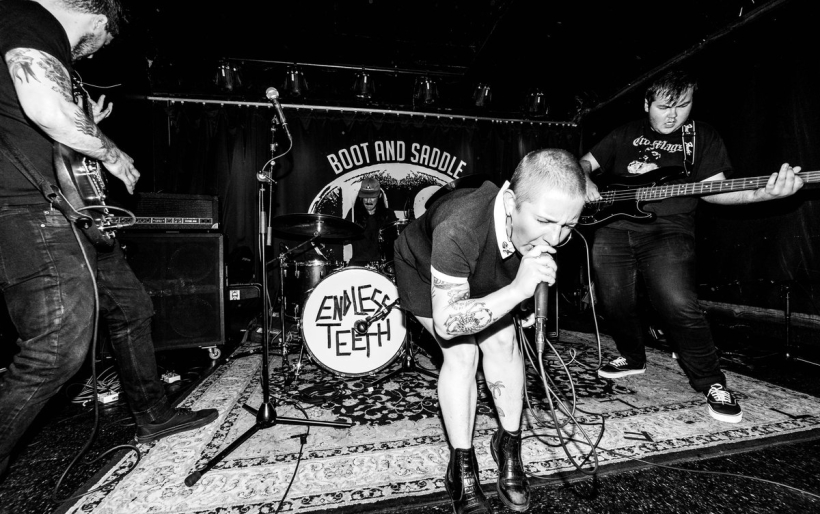 Pit Hair | photo by Gabe Coffey | courtesy of the artist

Covered in debris from dust-strewn practice spaces, tucked into dank basements where the drum kit competes for space with old rusting washing machines the landlord refuses to repair or throw out, huddled together under bridges or in struggling speak-easys with one speaker sound systems — it’s Philadelphia punk rock, a movement informed not only by the DIY community at large — a sprawling network of zines (they still exist), record labels, show spaces, and resources that wild youth and curmudgeonly old crusties have tapped into for decades — but also by wack shit like the city’s raging stop-and-frisk laws, the constant assault of rapid gentrification that feels inevitable, and a tumultuous, strange push-pull that has existed within the context of the punk, hardcore and activist/art scenes in a city that still feels reverberations from the MOVE bombing. To say that Philly’s punk rock community has a tenuous relationship with the city is an overstatement.

But more and more, people who exist outside of the margins, not just because they wear all-black or have pink mohawks, but because of who they are, are finding the resources to get involved, and the cultural texture of the city is richer for it. We’re a city that has been home to Break Free Fest — a musical event highlighting bands who feature Black and Brown musicians screaming their brains out, an event that happens this Saturday and Sunday at The Rotunda. We’re a city that, before Break Free, was home to Rockers, a recurring event that for more than a decade sought to do the same.

It’s the city that prompted Full Bush’s drummer Adesola Ogunleye to put together a repository of rock, punk, metal, hardcore and indie bands that feature Black and Brown members in them — it’s an epic list. Philly is home to queerpunk label Get Better, to bands and artists that sonically break the mold like avant-noise punk jazz supergroup Ooloi (featuring members of Space Fuck, Static Bros, Sour Spirit, King Azaz among others), scream revivalists and afropunks Soul Glo, queer grindcore unit HIRS Collective, and yeah, even the bands on last year’s list, most of whom are still kicking.

We’re a city that demands more from its punk rock, that asks questions, that fights the power, that provides sanctuary. Here’s seven bands embodying that spirit.

OK, whoa, we might be peaking early here. GAZ, comprised of four of the punkest women on the planet, is an absolute torrent of violence served up to the system, pummeling Doom-esque nastiness from former members of arty avant-noise band/dance troupe SWARM among others. On their demo, the band rages through five grungey songs with relentless fervor, particularly on “1948”, where a sludgy, ominous intro where vocalist Golnar laments about the passage of time not being enough to rectify very real, globally catastrophic problems, turns into the wildest moment of the demo. Live, they’re a force too — constant motion, immediate, hectic bursts of anti-system.

Though there’s no drop-off in passion, Deep Tissue is a serious departure from Gaz’s chaos. They’re a dizzying blur of XTC-esque guitar work, mid ’80’s DC emotional anguish, and dreamy, dark rhythms. The opening track “Mood Swing” encapsulates this: heavy, full guitars drape perfectly over a wiry beat, while strain, bordering on desperate vocals tell stories of “feeling stupid” in the face of life’s minutiae, a feeling so overwhelming and engrossing that to live in those moments of disappointment feels like you’re experiencing a great loss. Where the heck did this band come from?

All young legs and wild lungs, flailing body parts and explosions, Pit Hair lives in the criss-crossing seams of what’s gnarly and what’s considered acceptable human behavior in the fabric of the punk rock underground. Which is just, like, super weird considering their ultra-crunchy, thick guitar sound is matched up with songs like “Aggressive Behavior” off of their FUCK HARDCORE EP that rail against the continued meatheaded-ness often associated with the genre. Live, the band delights in destroying misconceptions; seriously, they’re like the sweetest folks in town, but, and particularly vocalist Tori Roccia, a sprite raging across the stage like the lost vocalist from The Blood Brothers or an intern with His Hero Is Gone, they undoubtedly and passionately rip.

Here’s something I can’t ever say again: I’ve never cried listening to a noise-rap song. “The Trouble With Technology” by Manikineter, aka Carl Kavorkian, a seasoned rapper (he’s got tracks with MF Doom. From the ’00s.) and death metal vocalist, pretty much ended that. It was a dark and stormy night as I exited the 42 bus home, feeling wrecked from the day’s microaggressions and general systemic nonsense, and somehow I’d forgotten I’d programmed this jawn the night before on Spotify queue. The sharp, dissonant feedback proceeded to destroy me; I’m still injecting Debrox tryna get my earwax game back up. Manikineter isn’t a “punk rock band” in the orthodoxed sense, but if you see him live, splayed out in a gimp mask in front of a wall of noise makers, drum machines and beat boxes, you’re certain to leave the set fully aware that punk rock, whatever that is, is in good hands.

While this band may thrive off of their un-Google-able-ness, after being recommended by some reliable sources (namely Christo of Yarrow and Ave of Sour Spirit/Ooloi) and hearing their wildly challenging EP Die and Dance, it’s safe to say that Eat is worth unearthing. Blistering nods to no wave abound, sure, but their music, especially on the demented faux-dance anthem “Hunger Strike”, feels more archaic, more barbarous, than that. Strained, nervy, and unsettled rhythms like a keyboard-less version of Screamers for the now age? Let’s Eat.

I skipped seeing Protomartyr, a ridiculously sick Detroit post-post punk band with three records on big labels, at Union Transfer after having listened to their records non-stop for a month. No, The Ire was playing the same night at a multi-tiered art space in Gray’s Ferry, so to miss my chance to be covered in filthy fog-machine smoke, dull blue lights, retro-futurist DJ’s and to not witness the dreamy, Cure-esque genius of this band wasn’t going to happen. This band is relentless rhythm, oceanic guitars, and Siouxsie-esque vocals done with unmatched control, especially on the song “To Sleep”. “It’s all a dream!”, singer / Afropunk goddess / barista Maya Brooks assures us, but I don’t know. The Ire feels so needed right now, so necessary, so real.

Ew, gross, a demodex is a fucking mite! It’s apt, this band gets under your skin, crawling and clawing around your epidermis with its noise, ritualistically exorcising the crusty orthodoxy of regular punk rock with every chord, with every spikey drum beat, drenching it all in a delicate, nearly gossamer-like layer of guitar feedback. The scene-gift that is Nicole Cosentino’s vocals are raging, inspired, and immersive, not simply relying on “oh me, oh my, the pain inside”-isms, but offering an example of where punk rock has been, and can go. “Disconnection! From reality!” they belt like a smarter Jello Biafra raiding the Crass Records back catalog at their home offices, on the song “False Connections,” one of the most chest bursting punk songs the city’s ever heard. Live, they are all over the venue, crawling through the stage and around instruments, between static audience members, not unlike their band’s namesake, ready to sink into flesh, not to poison, but to nourish, to make whole.