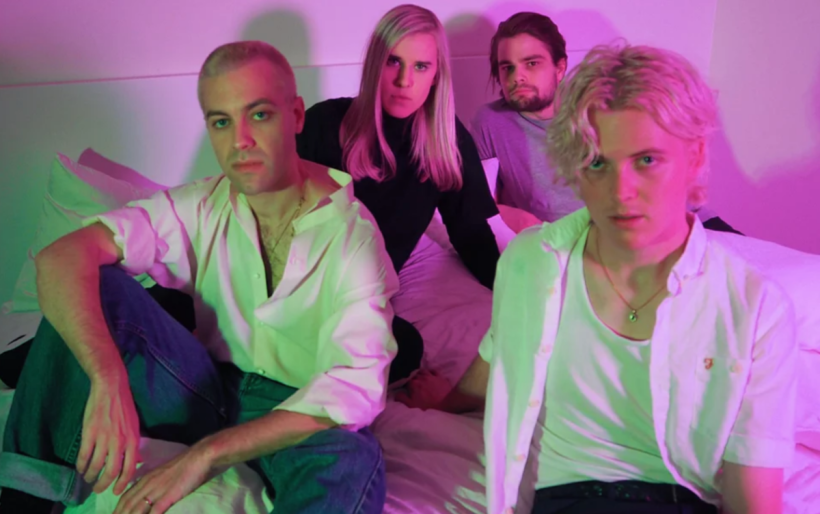 Cub Sport | photo by Joe Agius | courtesy of the artist

Building Confidence: Cub Sport on where they are and where they’re going

“Unwinding Myself”, the opening track of Cub Sport‘s eponymous third album, signals that the record that follows is a different beast from its predecessors. Where This Is Our Vice focused on depression and BATS chronicled Tim Nelson’s experience with coming out, Cub Sport is marked by self love and acceptance. The album, released in January, comes after Australia finally legalized same-sex marriage, allowing Nelson and bandmate Sam Netterfield to wed last August. Bursting with catchy hooks, addicting synths, and beautiful lyrics, the album is both a personal and musical triumph.

The Brisbane band is currently on a North American tour in support of the album. They will play The Foundry on on Tuesday. Before their show in Montreal this past Friday I got the chance to catch up with Nelson over the phone. Conversation ranged from fans’ responses to the album, where he sees the band going next, and being serenaded by Solange.

The Key: How have people been responding to the new album on tour?

Tim Nelson: It’s been really amazing! Like it’s kind of exceeded my expectations. The online response through social media and everything was really amazing, and people have really connected with this album. I think getting to play the songs live, especially looking into the fans eyes and singing these songs and seeing them crying, it’s more than I could hope for, really. It’s been incredible.

TK: Has there been a particular song or moment in a song that you’ve really connected with on this tour?

TN: I think “As Long As You’re Happy” is probably… I feel like thats the one that seems to get the most emotional response. People seem to really connect with that song live. And then playing “Sometimes” live is always really fun cause it is like our most banging song. It’s always like… there’s a lot of energy.

TN: I feel like they feed into each other. I feel like my confidence is always building. Especially when we released our album BATS and started touring that, I felt like there was a real shift in how I hold myself on stage and the way that I perform. So I feel like I went into writing our third album just feeling overall a lot more confident and more sure of who I am as an artist and that sort of thing. So now, getting to bring those songs to the live show, it feels like it’s another step up. It’s really exciting to be living out this Cub Sport evolution.

TK: Listening to the record, you guys have put yourself in a position where you can go anywhere now. Do you have a sense of what directions you’re being pulled in next?

TN: I feel like I’ve written a good chunk of the next album. To me, the overall vibe…it feels a bit lighter than our previous albums, which feels the natural progression. It feels like it is a story of finding inner peace and living in love and pushing fear aside. There are still things that I’ve been through that I feel like I’m still sort of working through and writing sings has always been a way for me to sort of process. It is a way to help me heal from things. So, while the next album is kinda looking forward in a lighter sort of energy, I’m still kinda looking back a bit. It’s sorta just where I’m at right now. I think the overall vibe is lighter. I feel like it is still quite a pop world, but with a Cub Sport twist.

TK: So last week you guys put out the video for “Limousine”, which is fantastic! The way I’ve described it to my friends is like dripping in glitter and sweat. I wanted to know what about that song drew you to that kind of visual world.

TN: That song has always felt like it has a kind of inter-dimensional otherworldly energy about it. I always envisioned a kind of alien, glam style video for it. Right from the first demo I wanted to shoot a video with a limousine and have a shot out the top. It was really amazing to see that vision come to life. We met the people that we made that video with only a few months before making it, and it felt very fateful making those connections and getting to make that vision a reality.

TK: It’s fantastic! Then you put out a new remix of “Summer Lover.” Could you talk to me a bit about that?

TN: We were approached by a UK producer, EMBRZ, and he said that he was really vibing to “Summer Lover” and wanted to do his own interpretation of it. He sent through his remix and we were so excited when we heard it. It feels so euphoric and summery. I feel like the original’s vocal and lyrics feel so nostalgic…it feels kinda heart-wrenching to me, so it’s cool team that up with a more upbeat, euphoric production to make a dancey Summer anthem that is also super emotional. I’m actually just putting the final touches on a video that I’ve made for it that I’m gonna upload to YouTube probably after this interview.

TK: You mentioned “dancey” and a lot of the tracks on the new record also are into that dancy, euphoric world. Have you been inspired by dance in any way? Or movement? Is there something that you’re doing on stage that’s pushing you to want to move more?

TN: I don’t think it’s necessarily something that has been inspired from on stage. But, I do feel like it was a natural progression, just in terms of building energy and the themes that I’ve been writing about. It feels emotionally and energetically heightened. That dancey production has really suited a lot of those moments of the album.

TK: Do you see that heightened dancey world carrying over to the next era too?

TN: Possibly. Yes, but maybe in a way gentle way. 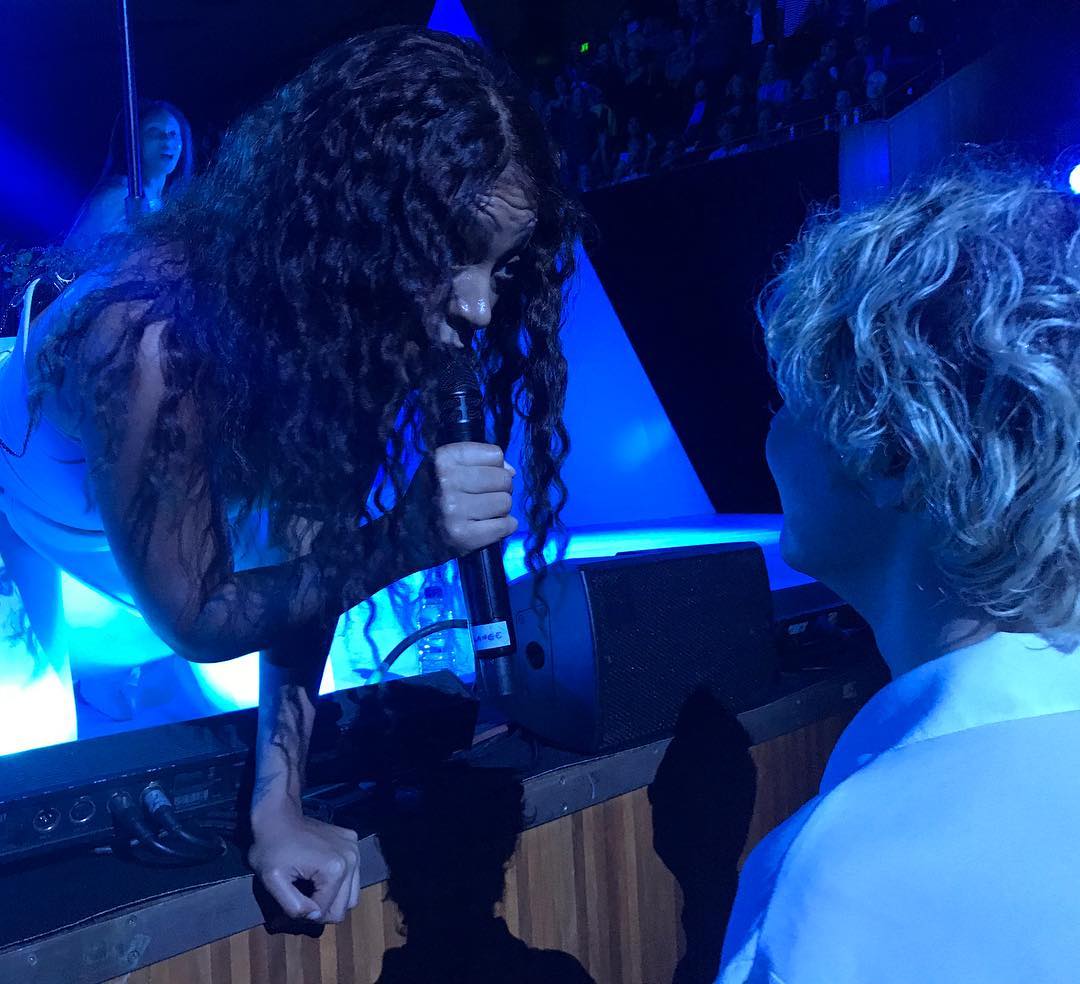 TK: So I was scrolling through all of your social media these past few days and I wanted to ask you about the picture of you and Solange.

TN: Was this the photo of us backstage or the video where she’s singing to me?

TK: The video where she’s singing to you. Is there another one?!

TN: I met her backstage at a festival at New Years between 2013 and 2014. That was just very brief. And then last year when she played in Sydney, we flew down to see the show. We were in the front row and we made eye contact a couple of times. In “Some Things Never Seem To Fucking Work” she came right over to me and knelt down on the edge of the stage and it felt like she sang straight into my soul. It was the most incredible experience. It was indescribable. It felt like we were the only two people in the world at that moment. Then one of my friends got the video of it happening and when I posted it on twitter after the show, she replied “your energy,” and I just was like “oh my goodness Solange responded to my energy!” That’s like the number one compliment.

TK: What do you think was better then — that moment or your wedding?

TN: Hahaha! My wedding. It has to be. They were very different experiences. I think my wedding is like, you can’t really compete with that!

TK: That’s fair! What have you guy’s been listening to on the road?

TN: Today I listened to the Steve Lacy album on repeat on the way to Montreal. I was trying to catch up on sleep cause we only got like four and a half hours last night before we had to get back on the road, so I was kinda snoozing through it and it was really nice. And I always listen to Frank Ocean. I still listen to Blonde all the time. I listen to a lot of Mallrat and Hatchie. I listen to a lot of Joji at the moment as well. Solange too. Kali Uchis always gets thrown on in the tour van.

TK: Sounds great! How do you think we get Mallrat to be the biggest Pop star in the world?

TN: I think we just sit back and let her do her thing. I think it’s gonna happen!

TK: I hope so! This question isn’t necessarily musical related, but as another twenty-something gay with bleached blonde hair, I wanted to know if you think bleaching your hair is a necessary part of the Gay experience.

TN: Hahahaha I guess it depends on the individual. I felt like when I dyed my hair blonde, all of a sudden…I dyed it in the middle of a tour we were on, and I swear it changed my on stage persona. I was like “aw this is like who I actually am!” I’ve been dying my hair blonde for over a year now and Zo[e Davis] in the band, she dyed her hair blonde not long after. Now both of us never want to not be blonde ever again! I’m sure it’ll happen one day though, when my hair falls out.

TK: I noticed while stalking your social media that one of you is almost always wearing a piece of your own merch. Is that on purpose or do you just have a lot of it?

TN: We have a lot of it and we make the merch to be something that we would want to wear. So it’s kinda my favorite clothes anyway. Between Sam, Zo, and I we’re all pretty wearing at least a couple of merch items. I think it actually helps sell the merch more so it’s a win-win.

Cub Sport is out now. Tickets and information for Cub Sport’s show at The Foundry on Tuesday can be found on the XPN concert calendar. This interview has been edited and condensed for clarity.