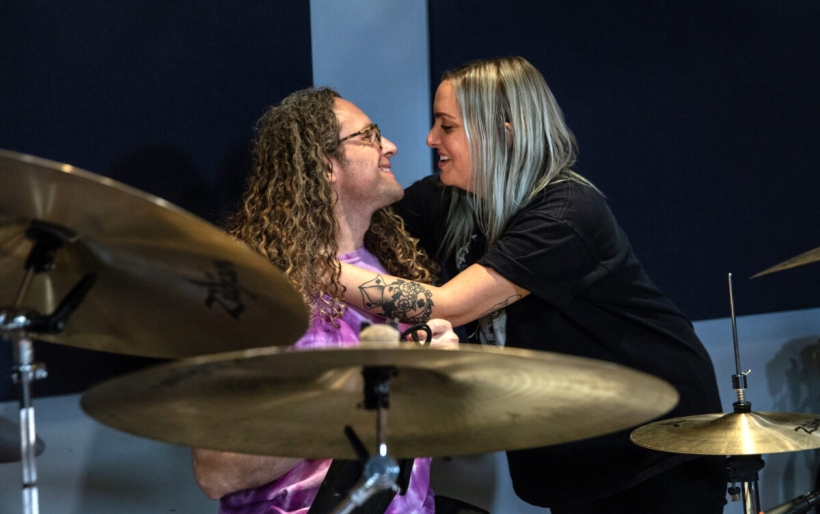 With this appearance, Lehigh Valley indie pop duo Slingshot Dakota joins the Key Studio Sessions three-timers’ club. And while we haven’t yet decided if members of their elite society get a jacket, we can tell you that watching artists grow over a span of years and albums — and instudio performances — is something truly special.

In 2013, singer-keyboardist Carly Comando and drummer Tom Patterson were two contagiously upbeat people with catchy songs, deep feelings, and a record called Dark Hearts that showcased all of those things. In 2016, a Break-era session found them more at a more complicated place, and writing songs that reflected the good and the bad of adulting; the deepening of relationships as well as the frustration of not moving as quickly in life as you’d like.

Their solution: keep getting louder, as the lead single of their tremendous new record Heavy Banding suggests. It’s 2019, Slingshot Dakota are writing the best songs of their career, and as a musical two-piece they are more tightly in sync than we’ve ever seen — a connection that obviously carries over to Comando and Patterson’s marriage as well. (Keep tabs on their social media for lots of #couplegoals content, and find even more in this ongoing photo essay by photographer Matt Smith.)

For this set, Slingshot Dakota rocked out with serious efficiency: three songs, one take a piece, bangers all. The soaring opener “Blood Villain” is quintessential Slingy D, but also top-form Slingy D; with an unforgettable chorus about drive, determination, and holding on to your passions, it might be the best song Comando has written…ever? Though it faces some serious contenders in “Casino Night,” a bright and blooming synth tapestry about friendship and weeding out toxic people from your life, and the powerful punk of the aforementioned “Louder,” which screams into the void about music industry frustrations but fearlessly races forward all the same.

Listen to a complete archive of Slingshot Dakota’s Key Studio Session below, watch a performance of “Blood Villain,” and see the band kick off their Heavy Banding tour at Everybody Hits tomorrow night with Harmony Woods and Hit Like A Girl. Tickets and more information can be found at the XPN Concert Calendar.