Curtis Cooper takes us through their new Graceful LP, one song at a time - WXPN | Vinyl At Heart 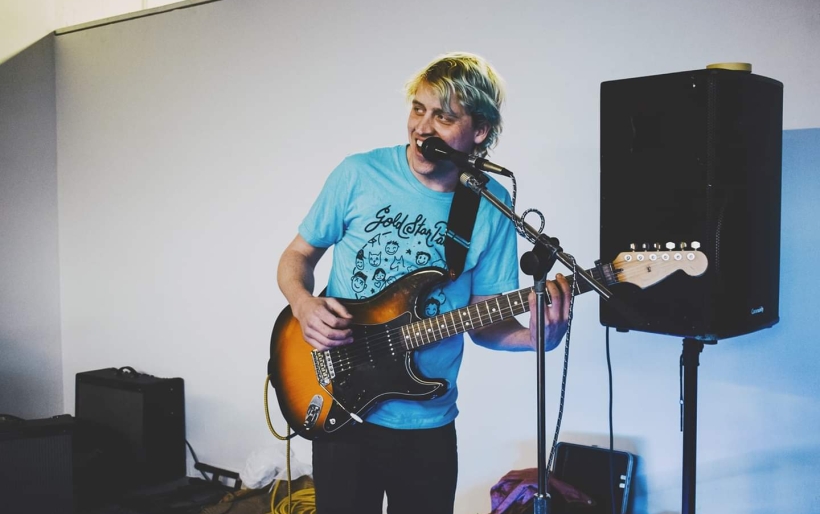 Curtis Cooper | photo by Kristina Abuladze | courtesy of the artist

Curtis Cooper takes us through their new Graceful LP, one song at a time

A year and a half ago, Philadelphia singer-songwriter Curtis Cooper was emerging from a haze of addiction and depression, of deep personal lows and tragic losses in their circle of friends. The intense emotion surrounding this time period was channeled into Messy, Cooper’s turbulent sophomore album that is equally infused with propulsive punk, explosive electric guitar jazz and psychedelic rock, as well as cathartic screams into the void.

By the time the album was released in the autumn of 2017, Cooper was in a much better place in life then when it was written. They had come out as nonbinary — meaning that they don’t identify their gender as exclusively male or female, and use they/their pronouns —  they realized what a strong support network they had in their family and friends, and they were looking forward to their next chapter. In an interview at the time, Cooper told us that the new songs they were writing were more acoustic-based, with vocals in their upper register. “It’s a prettier voice, a falsetto,” Cooper said. “Which I didn’t think I was allowed to do because men aren’t supposed to sing high.”

They also said the album “is going to be a lot about gender and happiness. It helped coming out as nonbinary because it takes a lot of pressure off yourself. ‘I’m supposed to look this way, I’m supposed to act this way.’ All that crap is worked out. I’m definitely writing happy songs now, or at least positive songs now.”

Today, we’re happy to give you a first listen to the resulting album, Graceful. As Cooper’s quote suggested, reducing it to “happier” isn’t quite accurate — there are songs on here about navigating mental health struggles (“All of my life I’ve given a sign / And i know we don’t see what others see” in “All Of The Time”), there are songs about trying but still feeling not entirely comfortable with one’s outward appearance (“Does this fit right? / I can’t tell.” in “Best Dress”). But in the same way gender is complex, and not an either-or thing, so to is emotion, and to deny the nuance and range in our mental states is to deny our true selves. Cooper is right that the outlook at the end of Graceful is a positive one, as its best moments are about bravely expressing gender (“Graceful”), appreciating that you and your loved ones are alive (“I’m Glad”), and pushing to be the best person you can be.

On top of the lyrical themes, which Cooper has always excelled at unpacking, is an impressive musical range that dabbles in Appalachian folk and dreamy Beatles progressions a la Elliott Smith (“Outta Here”), urgent acoustic R&B and soul (the Ganou-featured “I Wish I Could Love You”), and nimble Latin jazz guitar (“Latency”). It’s Cooper’s strongest work to date, and we asked them to take us through the album one song at a time.

This track is supposed to be about the benefit of breathing exercises, with the 5/4 part representing anxiety and not focusing on breath, and the 6/4 part being a calming, relaxed feeling. Lyrically the song is about how my house has been broken into multiple times but no one has actually taken my stuff….it’s like good and bad because I start to think “damn my stuff isn’t even nice enough to steal.” Really just played around with this one instrumentally, and I had a really fun time working out the string parts for the outro.

I wrote this song in Nashville in 2014. I saved up some money and just spent like 6 months wondering around. I did a few small tours with this punk band, I lived on a friends couch in Nashville for a month, and spent an additional 6 months just wondering around, both in the U.S. and abroad. Everywhere had something different to offer, and I remember it being in Nashville that I really understood just how seriously you can take your instrument if you focus….like, I’d walk into a bar and be the only patron while the best guitarist I had ever seen was just playing to bar stools, and that would happen most places I went.

Uuuuugh, I finally had a bad relationship. I didn’t know what it meant to love and hate someone at the same time and it really hit me at THE worst possible time. I had to drop off a tour, it completely disrupted my sanity, but it did ultimately work out for the best. I found someone who saw me as gorgeous and it hurt when it didn’t work out, it was like I had to say goodbye to the idea of someone ever seeing me the way I truly want to be seen. This is absolutely not true, and I did get my feeling of self worth and confidence back, but it really did hit me way harder than I thought possible.

Definitely the most important track to me, obviously I named the record after this. I think this one speaks for itself? It’s easy to go back and forth between “I’m a mess, I’m a freak, no one will love me, and I’ll never love myself” but it’s on days like this when I really just think “Damn I look GOOD today and I feel good too, and I’m gonna show it,” and those are the best kind of days. Curtis Cooper | photo by Brendan Cooper | courtesy of the artist

I have this red dress that I stole from my mom years ago, I love it and its super classy, but I just don’t really know when to wear it, it just never seems appropriate. And when I finally do wear it out I just feel like its too ostentatious and everyone is just staring at me.

I wrote this song forever ago in the style of Amy Winehouse. I wasn’t going through a break up or anything like that at all, didn’t know what being cheated on felt like, I just wanted to play around. Morgane (Ganou) really makes this song, she put a nice bite into her singing. The outro is my favorite part on the entire record, once the drums fade in and just start pushing the beat. I initially wanted to do this super clean with a R&B feel but I like how it’s still just an acoustic guitar recorded in my room.

“All Of The Time”

Straight up about depression, and how it can feel like it has a lover’s hold over me. It feels like sometimes I’m just being seduced into sadness, I know how to give in to that feeling. To just sulk and sit in it is like being lured into something familiar.

Body Dysphoria bb, I really do love how the guitars come in for the choruses a lot though.

THIS is my favorite track on the record, I think everyone is gonna hate it but I LIKE IT so it’s staying! I kind of had really low expectations set for myself, and I know its DUMB but I have made it farther in life than I ever expected to. I’ve played really great shows all around the country, I’ve gotten to travel a lot, I get to skydive a few times a year, I receive an insane amount of love from my friends and family, things are above good. This song is just about how I need new goals and dreams in life, and I haven’t decided what else I want to get done.

Nice and simple, nothing too complicated here: I like YOU. I really like the outro when the drums drop out for a second, then the strings hit…I think it’s a really cool effect and makes things seem a lot more powerful when the drums kick back in. I wrote this song about a friend who I hadn’t seen in too long of a time, and it felt really good to reconnect.

Ok this song is a tough one to listen to, but it’s about a very close friend who has very similar idealizations as me. We both don’t really see death as this horribly sad thing, or anything scary at all, all it is is silence. Sweet sweet silence. What’s so scary about that?

Curtis Cooper plays PhilaMOCA on July 21st opening for Mal Blum and the Blums. Tickets and more information can be found at the XPN Concert Calendar.