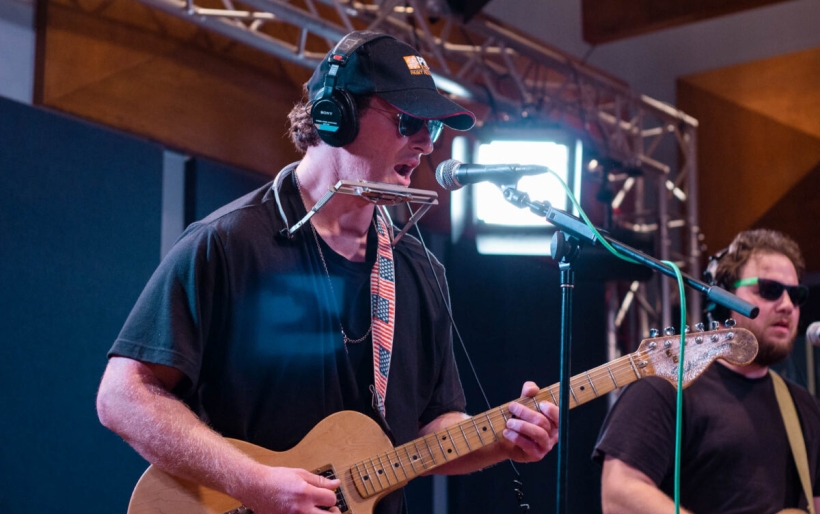 The Key Studio Sessions: The Warhawks

Maybe it’s their working-class roots in Gloucester City, New Jersey, but the work ethic exhibited by rock and roll four-piece The Warhawks is tough to match.

We first met them at WXPN care of the Jake Rabid-hosted Local Show on our XPN2 webstream, and they were just-out-of-high-school teenagers who had already spent years hustling their music at shows around the Delaware Valley and online. They impressed us with a revved-up proto-Key Sessions set featuring serious Kings of Leon vibes; five knockout songs, blazed through on a Sunday afternoon. A couple years later, I ran into them on the streets of Austin, Texas and saw that work ethic in action again when they literally showed up to an unofficial SXSW showcase I was watching and talked their way onto the bill. Chatting to them afterward, that was pretty much their plan — pile in their van, drive to Austin, get their music of the hands of anyone who would listen, play every street corner that would take them.

They’ve kept me in the know about every piece of music they’ve put out since then — brash garage rock bruisers collected on like 2011’s Thief, or 2012’s Ordinary Time. And after a while, I admittedly almost began to take The Warhawks for granted as part of our local music fabric: four dudes who kicked out reliably asskicking projects now and again.

And then this year’s Never Felt So Good happened. And it was that level-up that we’d all been waiting for.

The album was recorded at South Jersey indie music hub Gradwell House — a spot where The Hawks have become an integral part of the community, painting the space floor to ceiling and lending backing vocals to releases by Full Bush and Beach Slang — and it is a fast-paced set of nine bare-knuckled jams that recall the swagger of Arctic Monkeys and The Strokes, as well as the heartstring-tugging heartland rock of The Black Keys and Tom Petty. In their return to WXPN studios, they played the first five songs on the album in rapid succession: the swift burner “Not A Problem,” led by the gravelly voice of singer-guitarist Matt Orlando, on to the irresistibly poppy “Your Touch,” sung by drummer Patrick Bilodeau, and the searing “Miracle” sung by his brother, singer-guitarist John Bilodeau.

The sardonic “Don’t Fuck With Me” is simmered down to a clean electric ballad where you can acutely hear the Petty influence, while the band wilds out in the electric psychedelic blues world of Brian Jonestown Massacre for their closing number “Soulsucker.”

Below, watch The Warhawks performance of “Your Touch” in their Key Studio Session and listen to an archive of the entire set via Soundcloud. Clear your calendars for Saturday night, too, when The Warhawks open up an all-local lineup at Gradwell House with this week’s Key Studio Sessions co-stars Cabana Wear. Tickets and more information can be found at the gig’s Facebook event page.