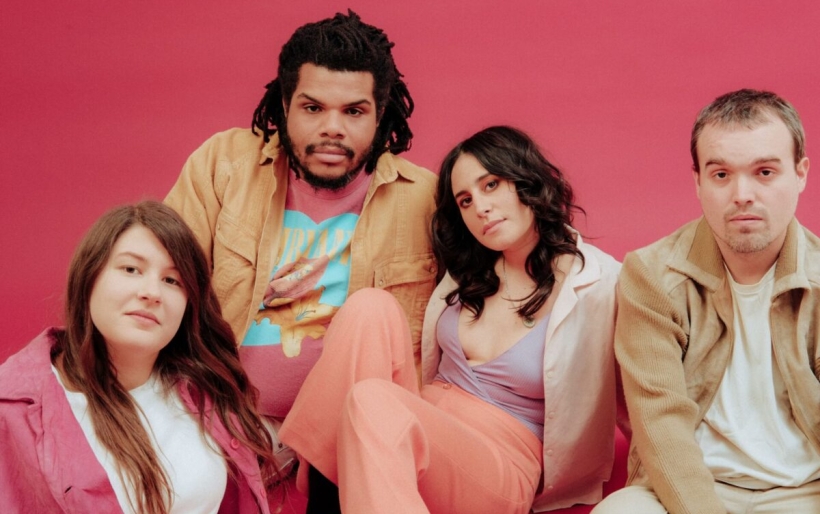 Mannequin Pussy burn brighter than ever on new album Patience

Friday morning, rising Philadelphia rock band Mannequin Pussy released Patience, their third full-length album and their most cohesive effort to date. Vocalist and guitarist Marisa Dabice pushes her voice to all its extremes, and the band — with Athanasios Paul on guitar, Colins Rey Regisford on bass, and Kaleen Reading on drums — pushes every song forward with a new urgency.

The band’s previous albums GP and Romantic, both put out by Tiny Engines, feature harsher sounds and drier mixes on spite-filled indie-punk jams that usually lasted two minutes or less. On Patience, their first release on Epitaph, they seem to have deepened their ambitions, with admirable results. Many of these songs — “Drunk II”, “Fear/+/Desire”, “In Love Again” — burn brighter and longer than any of their past work. Mannequin Pussy recorded the new material at Conshohocken’s Studio 4 with local producer and engineer Will Yip, and they achieved warm, thick mixes with guitars and drums spread out wide in stereo space. The band has distilled their tense DIY sound into something steadfast by incorporating elements of grunge and shoegaze, but they have not lost their edge.

Along with potent pop melodies, Patience is full of dramatic turns and fits of unchecked rage, all made more purposeful by the band’s considerable attention to track sequencing. The tracklist sets apart the shortest, most explosive tracks “Drunk I” and “Clams” while figuring in moments of respite, like the sober intro to “High Horse”, only when most necessary. A sense of continuity pervades the album, too: after the opening track’s bright pop-punk refrain disappears into whispers, from out of the calm the band bursts to life again all at once as they bring in the single “Drunk II”.

As on their previous albums, the songs on Patience deal with everyday life in extreme emotionalist terms, with Dabice often singing from the perspective of a broken lover surveying the wreckage of her collapsed love. She spins one of her most nuanced stories on “Drunk II”: “I still love you, you stupid fuck / But you don’t look at me, you don’t talk to me / And I know it’s cause you’re weak, baby / You feel guilty / It’s pathetic.” But she balances spite with self-doubt when she reaches the chorus: “And everyone says to me / Missy, you’re so strong / But what if I don’t wanna be?” Of all the technical feats on the album, Dabice’s vocal performance in the second verse is the most utterly astonishing.

The band presses onward in earnest from the album’s beginning to its end. If “Who You Are” is the album’s most upbeat and affectionate song, “High Horse” is thematically the heaviest. The composition evolves slowly as Dabice builds up her desperation, starting from a whisper. “Pushing me up against the kitchen sink / I can feel your breath, I can taste it in my teeth”, she narrates, before the band enters and she cries out, “Someone who wouldn’t treat me like you do / I fucked up / How many times will you beg me to?” On the impressive cut “F.U.C.A.W.”, Dabice embodies indignation most viscerally, barking demands — “Who the fuck are you talking to boy?” “Come on and spit in my face” — over militant thunder in the drums and bass.

After that turmoil, they regain their footing as Reading brings in a confident syncopated beat to begin the closing track “In Love Again”,  which finds the band at their most dreamy and optimistic — “This love started again / And it keeps getting better.” Following an intimate moment with Dabice’s voice floating above guitar and bass, they turn up the tempo for one of the record’s proudest peaks. “Let’s see it through,” Dabice belts. And in a surprising twist, they ease the tempo back down again for the outro and give the track a resolute instrumental sendoff.

While Patience demonstrates how well Mannequin Pussy has refined its songwriting since they began working together, it also suggests how much more stylistic and thematic material they might prove adept at handling — from where they stand now, the realms of dream pop, alt-rock and hardcore are all within reach.

Patience came out today on Epitaph Records. Mannequin Pussy will tour the US beginning in August and will play Philadelphia’s First Unitarian Church on September 19th. Visit the WXPN Concert Calendar for more details.