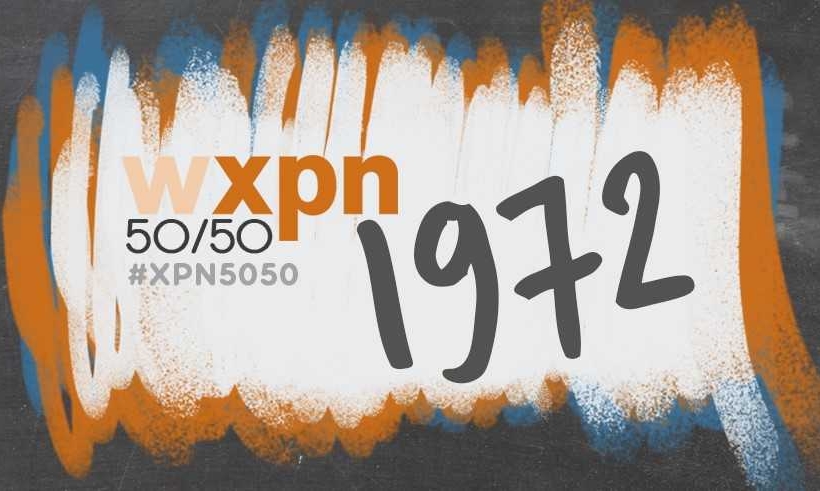 For fifty weeks this year, we’re celebrating the music of a specific year every Saturday on WXPN. We’ll be choosing the years randomly; for this week’s #XPN5050, Helen Leicht is putting the musical spotlight on the year 1972.

This week’s #XPN5050 takes us back 47 years, to 1972. It was a leap year with two additional leap seconds, making it the longest year in history — and to those who were watching the Watergate scandal begin to unfold on the news, it probably felt like the longest, too. But that’s where music comes in handy — in 1972, music was as much of an escape from the real world, and an outlet to process it, as ever.

David Bowie reinvented himself as Ziggy Stardust, and the Rolling Stones released their 10th studio album Exile on Main St. Roberta Flack’s version of “The First Time Ever I Saw Your Face” topped the charts, and Philly’s own Todd Rundgren released his biggest hit, “Hello It’s Me.” ABBA formed that year, though they were still known by the less-catchy name “Björn & Benny, Agnetha & Anni-Frid.”

Plenty of enduring hits were released in 1972, from Elton John’s “Rocket Man” to Neil Young’s “Heart of Gold” to Aretha Franklin’s “Day Dreaming.” Fleetwood Mac released Bare Trees, Bonnie Raitt shared Give it Up, and Joni Mitchell added For the Roses to her catalogue. George Harrison’s live charity album The Concert for Bangladesh, featuring Bob Dylan, Eric Clapton and more, took home Album of the Year at the Grammys.

In the movies, The Godfather won the Academy Award for Best Picture, Barbra Streisand starred in What’s Up, Doc?, Deliverance became a memorable thriller, and Cabaret was adapted from the stage to the screen.

The first paid cable network, HBO, began to revolutionize how people consumed TV, but folks were still tuning in to primetime, with shows like All in the Family, Sanford and Son, Hawaii Five-O, Gunsmoke, and TheMary Tyler Moore Show filling our evenings with laughter and suspense.

Below, listen to a Spotify playlist of songs from 1972.