Exploring Sound: Mike Lorenz and the Witherbees on the elegant blend of jazz, folk, pop and rock on their debut album - WXPN 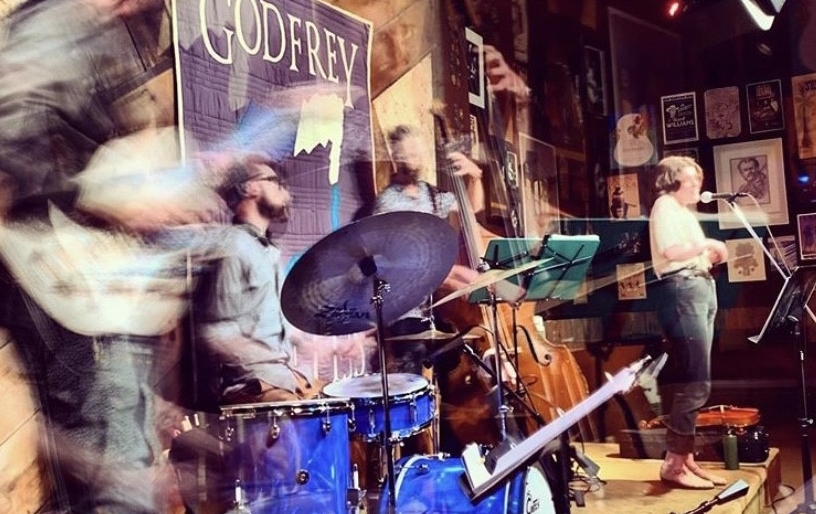 Exploring Sound: Mike Lorenz and the Witherbees on the elegant blend of jazz, folk, pop and rock on their debut album

On August 9th, Mike Lorenz and the Witherbees will put out their self-titled debut LP, an intriguing mix of instrumental jazz, alternative and chamber pop. The self-described “folk-jazz” quartet includes all Pennsylvanian musicians – Lorenz leading on electric guitar, Jacqui Armbruster on vocals and viola, Justin Sekelewski on bass, Zach Martin on drums – and their work on this album shows that they have developed wonderfully peculiar tastes and ambitions as a group.

Along with some touching original songs by Armbruster, the band approaches hit songs from several different eras in pop radio on their debut release. Paul McCartney, Wilco, The Magnetic Fields and Corinne Bailey Rae are all in the mix. Lorenz has pointed to Paul Motian, Sonic Youth and Sonny Sharrock as other inspirations for the group’s experiments – they also recorded a cover of Sharrock’s composition “Blind Willie”. The musicians bring traditional jazz aplomb and an intrepid sense of musicianship to each of their efforts on the new album, and the results prove both accessible and surprising.

Earlier this summer, I spoke with Mike Lorenz about how the band came together to construct their debut album. This interview has been edited for length and clarity.

The Key: How did this band form?

ML: That’s probably one of the more unique parts about the band. I’ve been playing with Justin [Sekelewski] for ten years and with Zach [Martin] for about eight years. The interesting part is that Jacqui [Armbruster] was a student of mine at [Lehigh Valley Charter High School for the Arts] where I teach. She graduated in 2018 and she had written this song that’s on the record – it’s called “Home” – that she would perform with some of the student groups at school, and I could hear that it was a really good song and I just thought I’d love to play that, like give it its proper showcase, you know?

And so I had the idea that we just record it, and so I pitched the idea to her and to Justin and Zach, because I thought they’d be really good for the sound of the song. So we did this recording session but I filled it out with some other songs, because knowing Jacqui as one of my students, we’ve had similar tastes in music, so I just picked a couple songs and we recorded them. And we all felt really good about the session, so we booked another session in December – the first session was in July of 2018 and the second session was in December 2018 – and between then we played a couple gigs and started to develop more of a sound and we just kind of figured, this is a band. And now we have a record.

TK: How did you guys decide what songs you would record for this release?

ML: It’s kind of just myself and Jacqui curating it. There’s a couple different angles that the group takes – we have two instrumental songs on the record, one of which I wrote and then another one is the Sonny Sharrock song, he’s been a fascination of mine. But then when we play live, we play some Carla Bley songs, we play a Herbie Mann song, Yusuf Lateef and the thing that all the songs have in common is that they’re from the 1970s, and so we’re not going as far back in jazz history as most people go – I mean, [laughs] it’s still fifty years ago – but we kind of explore that era and then write some music around it. And then there’s two original songs by Jacqui on the record and the covers we just kind of workshopped through our mutual interests. We just text each other like, “What do you think about this song?” And then we’ll get together as a band and arrange it, and some of the things on the record we’ve arranged in the studio when we record it.

TK: Are there any other jazz groups that have inspired you to approach these kinds of songs, the pop and rock songs that you put on the record?

ML: Yeah. A big influence – I think it’s probably obvious to hear – is someone like Bill Frisell. But I also really like Nels Cline, and Wilco is a band that Jacqui and I have really connected over, and Zach really likes Wilco too, and Nels Cline plays in Wilco so we’ve explored that sound. As far as covering pop songs, I think it’s just also that we all have interests outside of jazz. You know, there’s a Paul McCartney song on the record from one of my favorite Paul McCartney albums; I love David Lynch and his films and Twin Peaks so we do a song from Twin Peaks on the record. And so it’s just exploring what we’re fascinated by and then approaching it with an open mind.

TK: What was the recording process like for this album, and how did you want the instruments to sound? To me, the recordings sound very spacious, and I’m wondering whether you think about them the same way.

ML: Yeah. It was a pretty standard recording session, and what you hear on the tracks is basically what we captured in studio; there’s no overdubs or anything like that. A couple times there’s some post-production, like adding an effect, especially on the guitar. But I think it’s just that when we played it had a very wide-open kind of sound, and a lot of my other music, I guess – it may be a little bit more aggressive, but it usually has this shared quality of having a wide open kind of approach and sound. And so I think this was a cool opportunity to have that wide-open, spacious kind of sound, where things can be explored – but doing it through songs as opposed to just improvisations. Because it’s obviously very song-oriented, and maybe a little bit more approachable in that way, but it’s still opened up and exploring things.

ML: I haven’t really thought too much about the audience, I think it was just about expressing what our interests were. But as we were doing it, sometimes listening to the first couple cuts from the studio session and just thinking like, this should connect with people. Especially as a jazz artist, you know you make something and you pour your heart into it, but for mass consumption most people don’t really understand instrumental music as much – or not that they don’t understand it but it just doesn’t align with their interests. And so making this, it wasn’t a consideration but I realized that this is something that people should be able to attach to and relate to. You know, it wasn’t a consideration to make it approachable, but it’s a by-product of the interests that we have and how we play.

TK: Who are some other contemporary jazz artists that you’re interested in? I know you have mentioned Bill Frisell and also Paul Motian and they’ve both worked on some fairly experimental music and is that something you are thinking about – experimentalism and progressivism in jazz?

ML: Yeah, absolutely. Obviously Bill Frisell and Paul Motian are both huge influences on my music-making, and I love the way they approach songs. So people in their circle, like Paul Motian and Bill Frisell have both recorded with Petra Hayden, who is Charlie Hayden’s daughter; I really love Charlie Hayden’s work with Keith Jarrett and with Ornette Coleman and so that’s part of the sphere of influence. You know, Charlie Hayden was like a folk musician, but played jazz, that’s kind of the way he approached things. So I think those kind of idols of ours help with the approach. Also, we all listen to really different types of music. I love music that pulls in from different avenues – there’s a lot of great artists from Chicago and this label that I listen to a lot called International Anthem, and their music is jazz but it’s coming from so many different directions. Maybe some of it’s church music, maybe some of it sounds like a hip-hop beat tape, and it’s all really expressive and interesting and exciting.

TK: Does the group have any future plans to record more music together? I know you’re playing a number of gigs coming up in August.

ML: Yeah, we’re playing a bit in the area in August. The group is centered around Philadelphia but I actually live up in the Lehigh Valley, and so we’re playing at Musikfest in Bethlehem, which is a big free music festival – we’re playing just in this little sphere of places that we play. And we’re playing down in Philadelphia at Paris Bistro, And we were just talking about doing a live in-studio session with video, and then recording some new stuff for a future release.