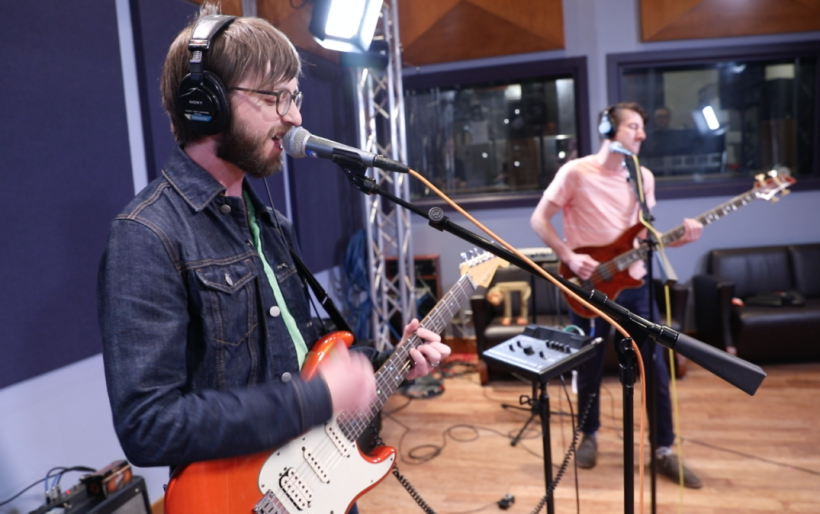 Philadelphia indie rock four-piece Spelling Reform is a band that proudly wears its influences on its sleeve — but with influences this good, can we really complain?

As you listen to the band’s Key Studio Session, it’s impossible not to hear a little bit of 80s R.E.M. in the way singer-songwriter and guitarist Dan Wisniewski shares harmonies and trades counterpoint lines with bassist Tom Howley on the buoyant opener “The Second Coming.” Or the way the expansive closer “Merriweather Lewis on the Divide” begins on fervent Feelies-esque strumming, and then launches into a Weakerthans thump care of drummer Mark Rybaltowski. The chords and textures from new keyboardist Jim Gannon add a Pernice Brothers feel to the proceedings, and there are more than trace levels of The Mountain Goats’ John Darnielle in Wisniewski’s upper-register delivery (giving way to their self-depricating self-description, “nasal indie rock”).

Okay, then, we get it — Spelling Reform sounds like a lot of acclaimed, bookish-cool indie rock bands from the past 20 years. But they bring their own perspective to the table care of Wisniewski’s clever turns of phrase and cogent lyrical vignettes.

Their song “(I’m Believing) The Same Thing,” is a multi-layered parsing of toxic masculinity, taking on both misogynists who boast about, oh, I don’t know, grabbing women by the pussy — locker room talk, you know — but also addressing the way other men react to their skeezy companions. Some might not be down with their banter and behavior, but shrug it off and remain silent (“what’s a lie with a friend? This is a conversation.”) while those who speak up take the “that’s somebody’s daughter” route, as though infantilizing women is the only way they’re able to comprehend respecting them. It’s serious stuff, but conveyed through an incredibly catchy power pop song; watch a video of them performing it for The Key Studio Sessions.

The song comes from Spelling Reform’s latest, Stay Inside, which draws on the global existential malaise of the past several years and makes it personal. While the album title seems to hint at one response to it, Wisniewski’s hook in “The Second Coming” reminds us that ugliness in the world is not anything new. In the face of apocalyptic hyperbole, he sings “It’s the second coming that I’m the least worried about. / Someone tell me: When was the first one again? / As for Comings Three through Six, well, bring on the new tricks.” These are changing times, and change can be a good thing; the concluding words of both the album and the session come from the song named for the 18th century explorer: “like Lewis out on the divide, I’m aware and I realize I’m transformed and amplified.”

Listen to a full archive of Spelling Reform’s Key Studio Session performance below; the band plays Johnny Brenda’s this Saturday night, July 20th, with Goodnight Lights and La Palma, more information and tickets can be found at the XPN Concert Calendar.