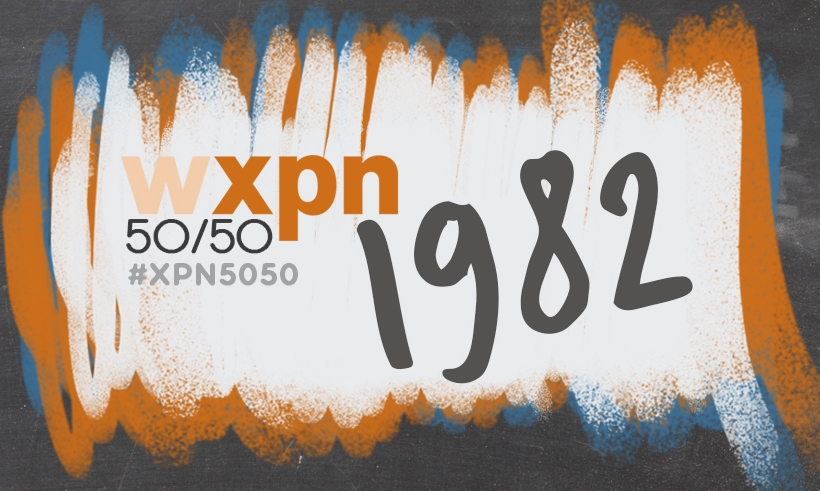 For fifty weeks this year, we’re celebrating the music of a specific year every Saturday on WXPN. We’ll be choosing the years randomly; for this week’s #XPN5050, Dan Reed is putting the musical spotlight on the year 1982.

The year 1982 was awash in the glitz, glam, and hair products of New Wave acts like A Flock of Seagulls, Culture Club, and Adam Ant, who wrote impossibly catchy music to go with their aggressive fashion statements. It was the year Marvin Gaye got “Sexual Healing,” Neil Young went supersonic on “Transformer Man,” and Queen and David Bowie found themselves “Under Pressure” in one of rock’s most enduring duets. It was the year that Toto’s “Africa” topped the charts for the first time.

Science fiction and fantasy ruled the big screen, from E.T. and Blade Runner to The Dark Crystal, Star Trek II: The Wrath of Khan, and Tron. Frat boys got their laugh on to Fast Times at Ridgemont High, Stallone introduced Rambo in First Blood and reprised Balboa for Rocky III, audiences sang along to Annie, Dustin Hoffman bended gender roles in Tootsie, and baby boomers tripped away to The Wall.

On Television, Cheers made its auspicious debut, finding laughs in the plight of a recovering alcoholic working as a bartender. Cult fave Police Squad! enjoyed its only year on the air, while The Jeffersons and Dallas were in the middle of their immensely popular runs. Newhart made its debut, as did the performing arts school-centric Fame, a spinoff of the successful film.

Below, listen to a Spotify playlist of music from 1982.