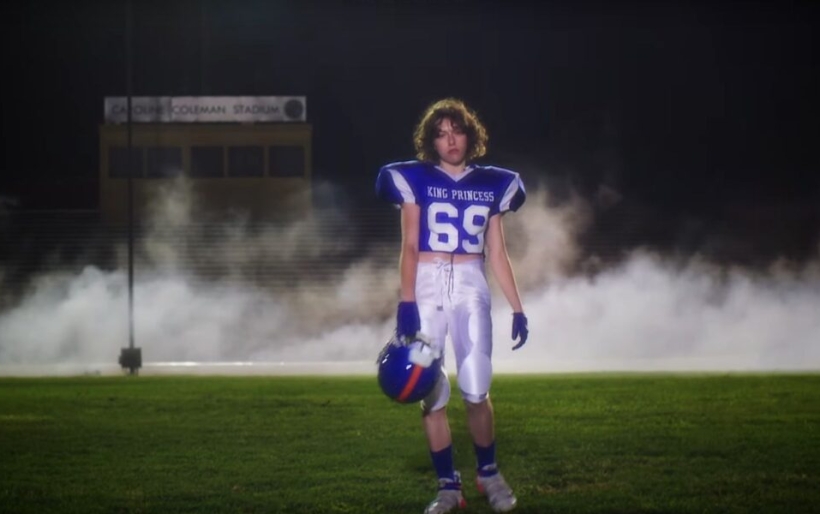 King Princess videos are consistently delirious, dreamlike, and fiercely bizarre, but in the best way possible. As someone who keeps up to date with her releases, and therefore is familiar with her wild antics, they do lose a bit of the initial shock value over time. Nonetheless, her artistic vision is still not lost on avid listeners.

Earlier this summer, King Princess released the track “Prophet,” a song much darker and serious than other recent singles like “Cheap Queen.” The chorus of the tune channels the energy of a deep obsession as she sings “’Cause I can only think about you and what it’s like to walk around you and why they like to talk about you.”  While other artists might pair a song of this nature with a more overtly sinister video, King Princess takes a playful approach.

“Prophet”‘s music video captures King Princess taking on quite a few alter egos. The first of which being a football player, with her stage name prominently displayed on the back of her jersey. Next, she performs alongside a band at a dimly lit lounge, and later leads a construction crew adorned with massive, face shielding sunglasses  And last but not least, King Princess finds herself baked into cake form by her obsessive lover who sneaks around throughout the video. Red slices of King Princess’ body are promptly cut and eaten by an observant crowd (red velvet perhaps?).

With only a year under her belt as an artist, it is frankly pretty amazing how self-aware King Princess is. She’s zany and off-beat but totally owns it. Her music videos only act as an extension of her eccentric personality. With a great creative team behind her (Director Cody Critcheloe of SSION and Creative Director Clare Gillen) she is an artist that will see nothing but success in the coming years. Watch the video below, and see King Princess at The Fillmore Philadelphia on November 4th. Tickets and more information can be found at the XPN Concert Calendar.