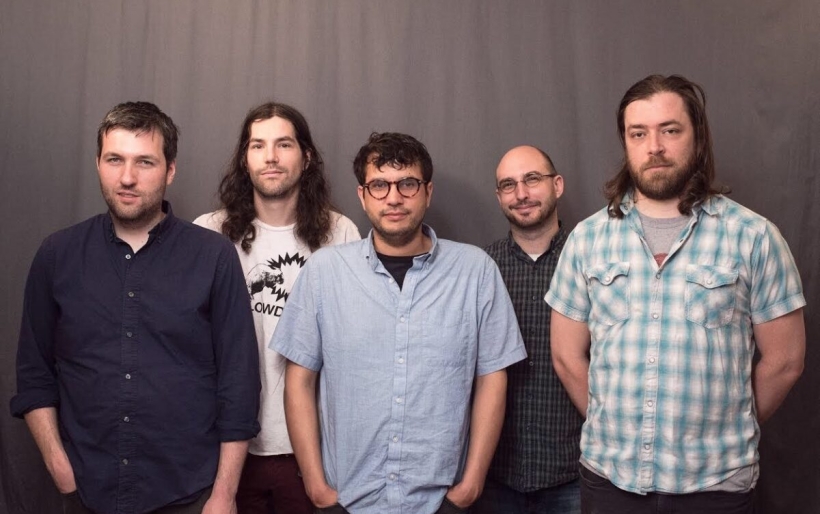 Honey Radar | photo by Scott Troyan | courtesy of the artist

From outsider rock to pure pop, Honey Radar are experts at harvesting jams

There are a few things that catch your eye right away upon walking into Jason Henn’s Kensington home where he lives with his wife. Some might be drawn to the shelf holding a variety of books, CDs and records along the wall to the right of the front door. It’s hard to miss the dinner table-sized textile loom just behind the couch, right next to the actual dinner table, which fills the living room as if it were any other ordinary piece of furniture.

Henn, guitarist and singer of Philly lo-fi rock band Honey Radar, walks into the living room where the other four members of the group are sitting. They’ve gotten together tonight to discuss their new album Ruby Puff of Dust. Fast forward to an hour later when wiry and exuberant guitarist Jess Stober makes an observation of something on Henn’s shelf.

“Jason, I just noticed all of your Jandek CDs on your shelf,” he says half excitedly, half amazed. “Man, I thought I had a lot.”

Everyone turns toward the shelf where there are stacks of jewel cases with white labels on their spines. “Yeah, they’re there because I wanted to protect my Monkees box sets,” Henn replies without a moment’s hesitation.

This brief exchange between longtime friends speaks more about Honey Radar than it sounds at first. Take the prolific, bleak experimentation of Jandek and the pop sensibilities of the Monkees and you don’t necessarily have Honey Radar pinned down, but it gives a sense where Henn, as the band’s primary songwriter, is finding directions for his own heady, burnt rock.

The well which he draws from is deep. It’s the source that yielded not just a single or two since 2016’s Blank Cartoon, but 12 releases of varying degree. From the jangly Ignore the Bells and mostly melody-driven Psychic Cruise 7” releases on Chunklet Industries, to the “guitar séance” of Spontaneous Salute to Robert Quine — a recording from a night when Henn and a friend commandeered the airwaves of their former college radio station in Indiana to send out live guitar noise until they were stopped by the next DJ with a scheduled show — released on Third Uncle Records, Henn hits the middle ground on Ruby Puff of Dust.

But it didn’t necessarily come easily to Henn. He says the album was almost done around early 2017 but that he’d started overthinking his process.

“I feel like I kind of psyched myself out over what the next record was supposed to be,” he says in his characteristic soft-spoken tone. “And I kind of stalled at being three quarters done. At least from my perspective it took a while. Instead of having just a whole bunch of material and just sorting it, I was trying really hard to fill these two holes. And then at some point we just had enough.”

He goes on saying those two holes were filled with the easy-going “Cornflake ESP,” and ever-escalating “Magnesium Blow-Up.” It’s to Henn’s advantage that he’s as prolific as he is. By his own words, Ruby Puff of Dust is somewhat of a compilation since the oldest song on the album is from as far back in his catalog as 2015. But its vibe is far more consistent than to seem like it. Yielding so much material is to Henn’s advantage, but to his bandmates it means some staying on their toes.

“A big part of it is just trying to keep up with his backlog of songs,” bassist Jordan Burgis says. “Because pretty much every practice it’s like, ‘You guys want to learn one, or 12, new songs?’ It’s kind of funny with this record coming out and that the back catalog is so huge. I just didn’t realize these songs hadn’t come out.”

Despite some changes in its infancy, Honey Radar has kept this same lineup since 2011, including Mark Rice on drums, who did the screen printing for the limited-edition Ruby Puff of Dust LP sleeves, and guitarist Armen Knox. With that many years spent together creating blown-out lo-fi rock, they all know what to expect from a recording session.

“I feel like if we’re making a record, we have a whole hissy, fuzzy and distorted world we’re creating,” Burgis says. “The songs are so short and there are so many of them there doesn’t need to be time laboring over them. It’s more about capturing those lightning-in-a-bottle moments.”

However, just this past January they completed a session that was a bit more group oriented. Henn says it involved more jamming and harvesting jams for overdubs. And by the sounds of it, Honey Radar isn’t showing signs of changing their pace any time soon.

“I always felt a band should have an album out every year and a non-album EP or singles in order to be at the baseline to correctly prove your existence,” he says. “But then it’s not entirely practical. You forget that the Beatles didn’t have jobs.”