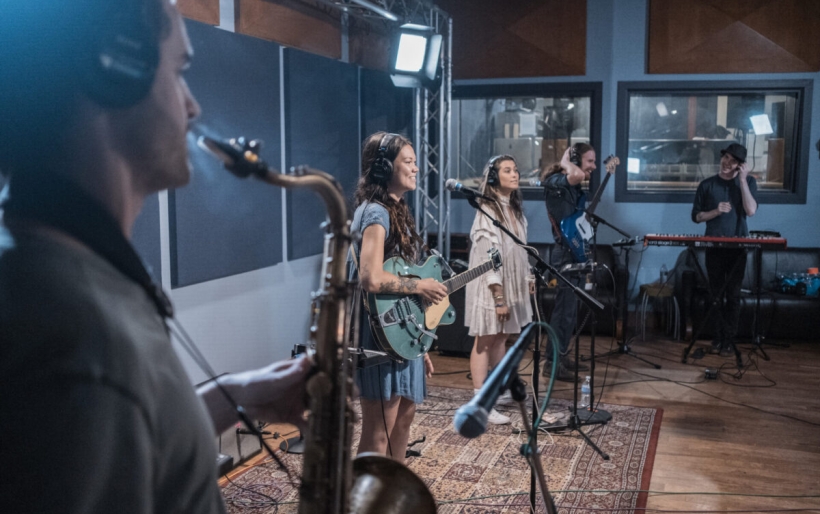 Rachel Andie and the Vth Element | photo by Skyler Jenkins | courtesy of the artist | skylerjenkins.com

The Key Studio Sessions: Rachel Andie and the Vth Element

Philadelphia’s Rachel Andie is very direct in sharing the underlying meaning of her music: “This one’s is about falling in love in a mental hospital,” she told the crowd at Philadelphia Folk Festival last weekend.

The song in question is “Speak Your Truth,” and through its pensive percussive thrum and a moving guitar line, it tells a tragic-yet-hopeful story that is very rooted in the songwriter’s own experience. As a child growing up in Lansdale, she immersed herself in studying dance — tap specifically, something she occasionally incorporates into live performances today — up until she hit her mid-teens, when mental health struggles began. Alcohol and drugs became a too-big part of her life, and while she was hospitalized for bipolar depression, she immediately connected with somebody in her same situation who introduced her to a massive vehicle for coping: music.

Specifically, she found music that went beyond the classical and jazz that she knew from dance training, and the pop she listened to on the radio. “It was no wonder I fell for you,” Andie sings on “Speak Your Truth.” “You we’re the first face I saw after calling my own bluff.”

Through this experience, she discovered Death Cab For Cutie and Bright Eyes, Joni Mitchell and Damien Rice. She learned about music as a means of giving voice to your innermost fears and frustrations, songwriting as a means of catharsis. After she got out, the need for catharsis continued: her family had lost their house, her parents had split between the Philly burbs and Austin, she was living on her own and had to drop out of high school and work three part-time jobs to support herself. But she persevered — got her G.E.D., make the best of her living and working situation — and it was because she’d found her creative calling.

She began busking around Lansdale as one of her means of making money, and built a YouTube following for cover songs that began to shift to originals. Soon, she moved to West Philly and immersed herself in its musical community, started teaching in music education programs around the city, all the while growing deeply spiritual.

And late last year, Rachel Andie and the Vth Element released the breathtaking Tu Me Manques. It’s their first album as a band, Rachel’s second recorded project overall, and it takes her experience of finding love, then losing it but finding a higher sense of purpose instead, and channels it into songs that recall the resplendent melancholy of The Sundays, Ida, and yes, Death Cab. The album also meditates on memory, independence, personal growth, and communication, and is sung in both English and Japanese (most notably the breathtaking “Waves,” which you can watch video of below).

It was recorded with the same lineup that played live in XPN studios this week — bassist Marc Nestman, drummer Andrew Gerace, keyboardist Logan Roth, saxophone player Tom Mentzer, and vocalist Mariah Del Rio. All of them are artists with their own projects as well, but when they come together, they gel impeccably, elevating Andie’s truth-speaking into a collective experience. Together, they process trauma and find healing, and provide a mirror for others in their experience to see themselves and feel less alone.

Tonight, Rachel Andie and the Vth Element play their final Philly show of 2019 at Boot and Saddle. The show kicks off a short run of east coast tour dates, after which Andie travels to Japan to visit family for a few months. They are joined by Ali Awan and PanSong; tickets and more information can be found at the XPN Concert Calendar. Watch them play “Waves” below, and listen to a Soundcloud archive of Rachel Andie and the Vth Element’s entire Key Studio Session.